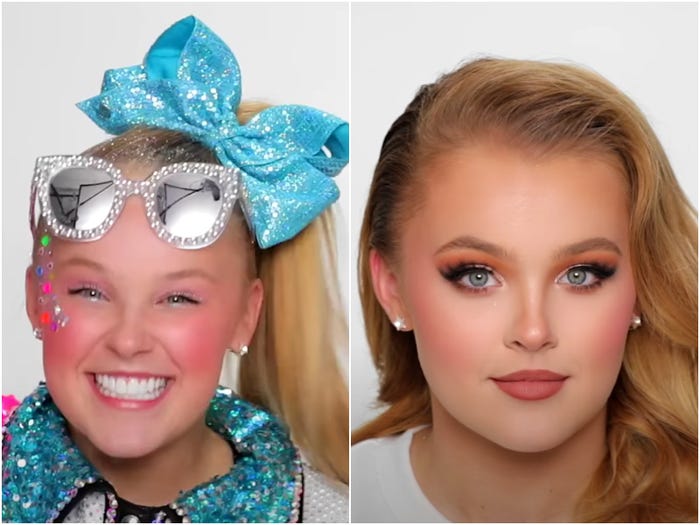 JoJo Siwa is opening up about what it was really like to get a glamorous makeover from James Charles.

Speaking to Carissa Culiner for the E! Daily Pop show, Siwa talked about hosting virtual concerts from her backyard, her new Christmas-inspired EP, and being transformed by Charles back in August. The 17-year-old told Culiner she was "terrified" when getting her hair and makeup done by the YouTuber.

The musician added that she doesn't like "different things," which made her nervous about the makeover.

On August 21, Charles uploaded a YouTube video titled "Giving JoJo Siwa A FULL MAKEOVER!" In the 16-minute-long clip, the YouTuber explained that he'd been trying to collaborate with Siwa for two years when he finally got her to agree to a makeover.

Siwa told him during the video: "Getting my makeup done, number one, is just like a 'no.' I like to do it. I don't let anybody else do it. My hair, even more so."

She looked almost unrecognizable once Charles was finished. Her signature updo hairstyle and bow were replaced with loose waves, and her sparkly makeup was removed in place of smokey eye shadow, winged eyeliner, contour, highlights, and matte lipstick.

"Obviously it's not me, I mean, you know how I showed up here in sparkles and bright pink and neon and rainbow, but it is really pretty," Siwa said at the time.

END_OF_DOCUMENT_TOKEN_TO_BE_REPLACED

END_OF_DOCUMENT_TOKEN_TO_BE_REPLACED
Recent Posts
We and our partners use cookies on this site to improve our service, perform analytics, personalize advertising, measure advertising performance, and remember website preferences.Ok