Home » Beauty » The art of Botox, and the loss of frowning

The art of Botox, and the loss of frowning

Last March, Botox rolled out a series of ads in the US directed by filmmaker Errol Morris. Styled like very short documentary films, the ads featured Botox users — a widower, a single mother, a drag performer — telling touching, sad, ultimately redemptive anecdotes. In 2019, a typical Botox commercial pitched the product as a girlboss tonic that could infuse fantasy women with pluck as they slunk from boardroom to bar stool. Now it was being recast as a kind of truth serum, a tool of deep personal introspection. The mother gazed upon nostalgic photographs. The widower recalled his husband’s eyes and wept. Though the subjects did not mention Botox, the camera regarded their restful foreheads with sympathy and implied that the procedure had a profound therapeutic effect. The tagline was: “Still you.” 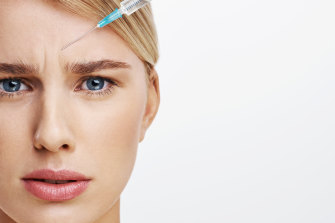 The idea of wearing some kind of mask — whether through plastic surgery, Instagram filter, online avatar or cloak of irony — no longer reads as unnatural, but rather as broadly relatable. Credit:iStock

Morris is known for revealing institutional delusions — of policing in The Thin Blue Line and of statecraft in The Fog of War. Now he was filming a sentimental mirage for a pharmaceutical company. But these spots represent more than just a paycheck for Morris. They are emblematic of the insinuation of Botox into our creative consciousness, as elective muscle paralysis has been refashioned into an extension of the project of the self.

Botulinum toxin is a poison that by some macabre coincidence both causes botulism and cures wrinkles. When injected at low doses into a crinkled forehead, it blocks nerve signals to muscles and smooths the skin atop them. (It also has medical applications, including for treating migraines.) Though there are several competing brands, Botox is the Kleenex of the category. It presents the kind of bargain one might strike with a nefarious sea witch: She will grant you eternal youth, but at the price of being able to move your face.

There was a moment when this trend was seen as a bad thing — for acting, for society, and especially, for women. Then came the Kardashians, the “Real Housewives,” a fire hose of memes and an army of spunky aestheticians waving hypodermic needles on TikTok. A Botoxed face used to strike viewers as an uncanny spectacle, but uncanny spectacles fuel reality television and internet culture, and thanks to those ascendant forms, Botox has accumulated a gloss of campy pageantry, helping disarm cultural fears around its use.

Botox once suggested vanity, delusion and self-consciousness, but now it has fresh associations: with confidence, resilience, even authenticity, as the idea of “having work done” has come to be seen as a legitimate form of work.

Botox (along with a constellation of other anti-ageing treatments, ranging from skin-sloughing peels to fillers to old-fashioned face-lifts) is now so ubiquitous that it has become increasingly difficult to recognise a realistically ageing face onscreen. The rise of Botox has affected not only how actors look but how they seem to feel. In 2010, in New York magazine, Amanda Fortini described plastic surgery’s assault on naturalistic acting, as nuanced interpretations have been supplanted by “stilted, stylised and masklike” presentations.

That’s still true, but now such performances are not just accepted but celebrated.

Consider Nicole Kidman. The entertainment press has been on Kidman forehead watch since the early aughts, when her brow was compared to a flat-screen TV and the frozen tundra. In 2010, Entertainment Weekly announced the “Return of Nicole Kidman’s Face,” heralding her performance as a grieving mother in Rabbit Hole as refreshingly rumpled. The next year, Kidman finally affirmed that she had once done Botox but had since sworn off it.

“I can move my forehead again,” she told a German newspaper.

If Kidman can indeed still furrow her brow, she does not appear to do it much. A new era of Kidman performances is being warmly received, not just in spite of her apparently petrified face but because of it. In a succession of pulpy TV series, all written by David E. Kelley, she has played sad, coolly mysterious wealthy women, and her acting has been praised by critics as “impenetrable,” “icy,” “waxen” and masklike, but in a good way. In 2017, she snagged an Emmy for her performance in Big Little Lies, and the metanarrative was even more compelling than the murder plot.

For most actresses over 50, the alternative to plastic surgery is not graceful ageing but obsolescence. Kidman has refused to quietly disappear, and the more relentlessly she works, the more her inert face starts to reflect not an idle vanity, or even a sad necessity, but a kind of staying power, a savviness and a resilience.

Kidman’s recent television work feels in conversation with the “Real Housewives” universe, both focusing on troubled women with enough cash to avail themselves of cosmetic dermatology. If Botox can appear unsettling in naturalistic films, it has found its home on reality TV, which delights in making a burlesque of womanhood. When The Real Housewives of Orange County premiered on Bravo in 2006, focusing on a coterie of middle-aged women pinned inside a gated community, Botox was practically a supporting player. In the opening credits, we see the 40-something “housewife” Vicki Gunvalson (really an insurance saleswoman) wince as a needle plunges into her face, and she whines, “I don’t wanna get old!”

The show, its many spinoffs, and the similarly Plasticine Kardashians universe have translated a Botoxed face into a clownlike sendup of femininity. On the internet, images of Housewives and Kardashians circulate as GIFs and screenshots, transforming into ironic avatars for our own feelings. Their faces, simultaneously melodramatic and numbed, reflect a strangely complex emotional truth, where the experiences of depression, anxiety, trauma and grief unfold amid an absurdist carnival of anesthetising content and luxury products. It is simultaneously unnerving and ridiculous, like Kim Kardashian crying through the Botox. Now, figures like Kidman and Kelley have recast that jumble of feelings through a prestige lens.

The internet has conscripted us into the construction and manipulation of our own images, so that the idea of wearing some kind of mask — whether through plastic surgery, Instagram filter, online avatar or cloak of irony — no longer reads as unnatural, but rather as broadly relatable. At the same time, social media has demystified plastic surgery procedures. On Instagram, a range of accounts hypnotically reveal their effects, and on TikTok, aestheticians have cast themselves as plucky ambassadors for injectable self-improvement, staging unfunny but self-effacing skits: “This is Botox crying face, when you can’t make ugly crying face due to Botox,” plastic surgeon Anthony Youn explains in one.

In the land of influencers, Botox is pitched less as a nightmarish habit than a relatable vulnerability. Also, a self-esteem booster and tool of self-invention. It was canny of Botox to recruit drag queen Yuhua Hamasaki for one of its ads. Among the wealthy white women of Orange County, Botox may suggest conformity and compliance, but drag recasts the construction of femininity as creative and individualistic. In the spot, Hamasaki implies that Botox, like make-up and wigs, is a tool for escaping the gender binary, not policing it.

There is a limit, however, to this sympathetic turn. Kidman has been savagely mocked for her appearance in the trailer for Being the Ricardos, a film set in the 1950s where she plays Lucille Ball, a woman known for her facial expressiveness. Even among Hollywood actors, the procedure remains a taboo. Elsewhere, it has grimmer connotations. In Botox, a bleak Iranian-Canadian film that’s been circulating at festivals this year, it becomes a profound metonym for self-delusion.

The film is about two sisters reeling from their brother’s horrifying disappearance, and how they come to rationalise the event, even forget it. When the sisters are not in physical distress — they spend much of the film hauling, shovelling and grunting — they are languishing in a medical spa where one of them works. In one scene, an aesthetician pitches Botox to a client.

“Botox means youth, eternity, to keep dreams forever,” she says. She adds, absurdly, that it “has roots in an Eastern Rite in Tibet and Mayan tribes in Latin America that believe death is the only way to become eternal.”

Even in commercials meant to promote Botox, a morbid shadow looms. The Errol Morris ads have a funereal quality. Soft lighting and sombre music suggest that the subjects are suffering from a terminal illness — which I suppose is true, as ageing eventually leads to death. Since many years of ridiculing Botox have failed to banish it from foreheads (Americans spent nearly $US2.5 billion on the procedure in 2019, according to the American Society of Plastic Surgeons), we are left to navigate the stages of grief, from denial and anger to bargaining and acceptance.