Adele looks slimmer than ever in first look of Vegas show 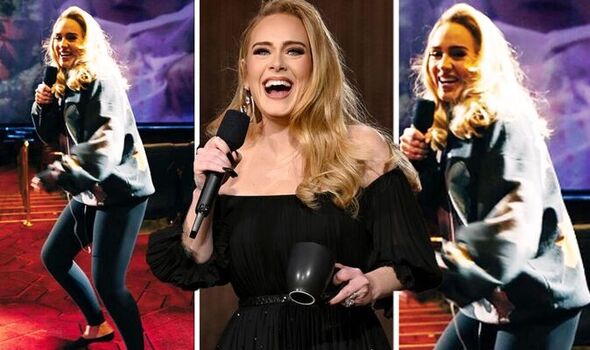 Adele looks slimmer than ever in first look of Vegas show

Adele, 34, shared a snapshot of her final rehearsals on Thursday as the singer geared up for the Friday debut of Weekends with Adele in Las Vegas.

It comes after the Easy On Me hitmaker canceled the residency with less than 24 hours notice in January as she blamed it on rampant Covid cases among her team.

Taking to Instagram, Adele, who has lost around 7st over the course of her career, put her svelte figure on display while inside Caesar’s Palace.

She donned casual attire sporting tight leggings showcasing her toned legs accompanied by her a loose fitted jumper and a pair of ankle socks.

The beauty styled her tresses to perfection as they hung in loose curls and cascaded down her shoulders, as the mum-of-one held a microphone grinning from ear to ear.

Behind the Grammy award winner was a large screen that showed photos of the singer as a youngster.

Adele showed off her trimmed down physique during rehearsals

Adele, 34, shared a snapshot of her final rehearsals today as the singer geared up for the Friday debut of Weekends with Adele in Las Vegas.

Adele is gearing up for her Las Vegas residency

Adele cancelled the residency with less than 24 hours notice in January but later revealed she had concerns over the stage show.

Adele has lost 7st over the course of her singing career

The 34-year-old singer–songwriter is set to launch her Weekends with Adele gigs on Friday at the Colosseum at Caesar’s Palace, with the show running until March 2023.

Adele admitted she is ‘nervous’ ahead of her Vegas debut

Adele has lost 7st over the course of her longstanding career in music as the songstress stood in a red-carpeted aisle that appeared to be in the middle of the venue’s floor section, with banks of seats surrounding her on all sides.

Adele said she ‘can’t wait’ to get on stage and perform for her fans as she penned on Instagram: “I’m feeling all sorts as I write this. I’m highly emotional, incredibly nervous but can’t sit still because I’m so excited. I feel a million miles away from home, I can’t stop thinking about when I was little and saw Tom Jones in Mars Attacks and thought blimey how did he get from Wales to Las Vegas!?”

Fans have flocked to Las Vegas to see Adele perform live at Caesars Palace with her residency lasting until March 2023.