The YouTuber announced on her Instagram on Thursday that she and husband Jeff Leach welcomed their fifth child together, son Cole Dean Leach. The news comes 10 months after the tragic death of their 3-month-old son, Crew, whom she paid tribute to in the post.

“Cole Dean Leach Arrived at 8:33am, 7lb 1oz, 19′ long and perfect in every way,” she wrote next to adorable pictures of her son. “When they placed him in my arms it was a feeling I could never describe.”

“Big brother Crew sure outdid himself, and no doubt is smiling ear to ear in Heaven,” she continued. “Welcome to the world Baby Cole, you have NO idea how much you’re loved. 🌈.”

Before giving birth, she shared that she sleeps with Crew’s llama every night. “So of course he’s here with me,” she wrote. 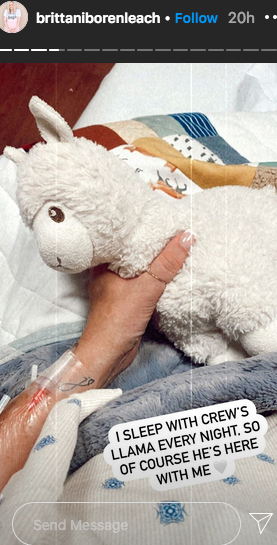 On Wednesday, Leach shared a photo of herself in the hospital room, writing that her “rainbow boy” was on the way. She explained that she was having “a lot of feelings and emotions right now” and was “typing through tears.”

“We appreciate every message, thought and prayer being sent our way as we bring this baby into the world. I can feel Crew in this room, I know he’s ready for us to meet this baby that he perfectly hand-picked to join our family,” Leach concluded.

Leach revealed in December that her infant son, Crew, was found unresponsive after taking a nap on Christmas Day. She detailed Crew’s condition in a series of Instagram posts, and then revealed in a heartbreaking message that her baby boy had died. The family made the decision to donate Crew’s organs.

In May, she revealed that she and her husband were expecting another baby. “Sent straight from Heaven and without a doubt, hand-picked by big brother Crew himself, estimated to arrive on December 1, 2020. ❤️,” she wrote.