Home » Celebrities » Busy Philipps testifies for Congress: Why is it brave to reveal a medical procedure?

Busy Philipps testifies for Congress: Why is it brave to reveal a medical procedure?

Embed from Getty Images
It’s been almost three weeks since Busy Tonight ended and I still visit her YouTube channel hoping to see something there. Busy is funny, blunt, and an outspoken advocate for women’s rights. In other words she’s one of us. Busy opened up on her show last month about her abortion at the age of 15, which she also wrote about in her memoir. She did this in response to the ridiculous anti-choice laws that are being passed throughout the US. Busy testified yesterday in front of the House Judiciary Committee along with a panel of other women, some brought together by The National Women’s Law Center. The topic was threats to reproductive rights. Her speech was powerful yet matter-of-fact and I got goosebumps watching it. Here’s some of what she said. You can see her speech in full in the YouTube video below.

On her abortion
If I were that same 15-year-old in Arizona today, legally I would have to get parental consent. I would be forced to undergo a medically unnecessary ultrasound, go to a state-mandated in-person counseling session designed solely to shame me into changing my mind and then take a state-mandated 24-hour time-out to make sure I really know what I wanted. And finally, I would be forced to give this state a reason why.

I am so sad that we have to sit here in front of a row of politicians and give deeply personal statements. Because the ‘why’ doesn’t matter. It should not matter. I am a human being that deserves autonomy in this country that calls itself free, and choices that a human being makes about their own bodies should not be legislated by strangers who can’t possibly know or understand each individual’s circumstances or beliefs.

On people calling her brave
In the week after I shared my story on my show, women were coming up to me on the street, in the supermarket and at the gym with tears in their eyes, thanking me for my bravery. But the word bravery didn’t sit right with me. Why is it brave to speak to an experience millions of people in the world throughout history have gone through? And then I realized. It is considered brave because as women we have been taught to feel shame about our bodies from birth. In my life I have had many medical procedures. But no one has ever called me ‘brave’ for talking about them. Abortion is health care, and should not be treated as different from any other health care.

One of the panelists on the other side of the “debate” (it’s not a f’ing debate) was a woman named Melissa Ohden who survived her mother’s abortion. Rep. Louie Gohmert (R-TX) questioned Busy about it in a convoluted way. He asked “Would you agree that somebody who has survived an abortion, like Melissa Ohden, has a right once she’s born to life, to control over her body where someone else doesn’t take her life?” That makes zero sense, but these people aren’t known for their logic skills. Busy answered “Although I played a doctor on television, sir, I am actually not a physician.” He pressed her and she said that politicians shouldn’t make this decision, which is between a woman and her doctor, and that she was talking about abortions, not babies, which was perfect. He seemed very confused about the difference. You can see that at about 5:20 into the video below.

Busy tells it like it is and she does not pull punches. Abortion is healthcare, late term abortions are rare, medically necessary and prohibitively expensive and these stupidly named heartbeat bills lack a basic understanding of science. I am scared for the next generation of women, I am scared for my son, and I’m angry that we’re at the point. I only hope it doesn’t go further than it already has. If it does, we are prepared to fight and we are prepared to get even louder.

While it shouldn’t be considered brave to reveal that you’ve had an abortion, which is definitely a medical procedure (that should be free), it was brave of Busy to step up, to speak for us, and to testify in front of Congress.

This woman in yellow behind Busy is giving me life. 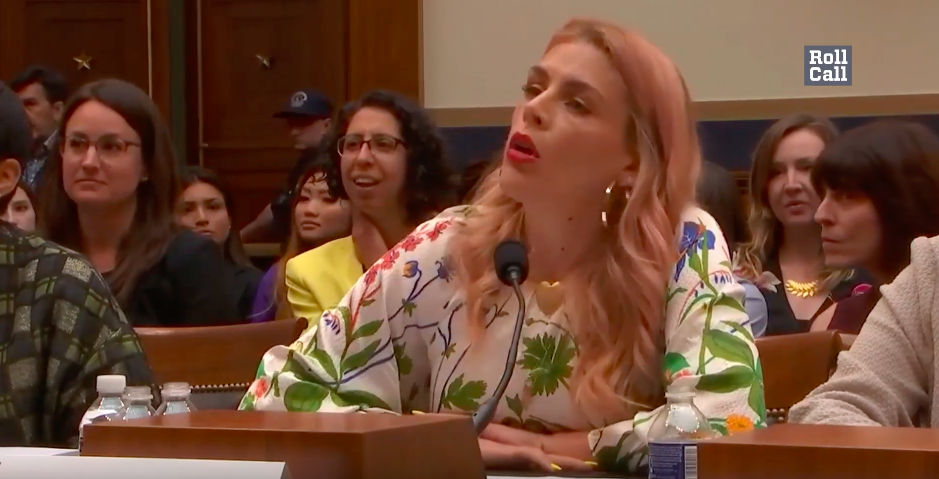