“You can put the entire thing to bed if the President would release the records and show the American people what he says is true,” anchor asks Brian Morgenstern 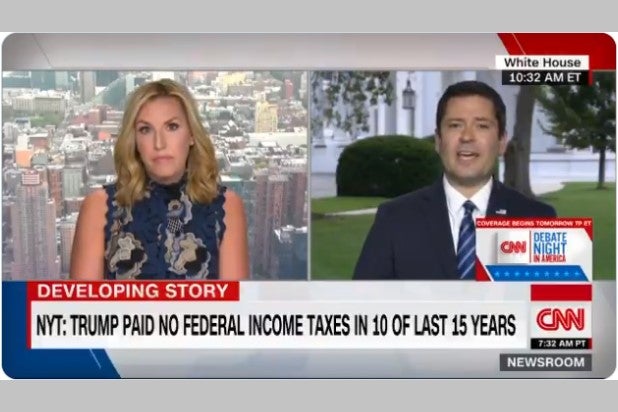 The New York Times released a bombshell report on Trump’s finances Sunday night, which showed he only paid $750 in federal income taxes for his first two years in office. The report also revealed in 10 of the last 15 years Trump paid zero federal income taxes after losing far more money than he made.

Morgenstein responded that the president and his attorney stated he paid millions in taxes. But when Harlow asked specifically about federal income tax — which an average American taxpayer paid $12,199 in 2017 — Morgenstern instead brought up his opponent Joe Biden’s son.

“You should be asking where are the taxes on Hunter [Biden] $3.5 million from Russia,” he asked.

“You’re not going to answer that question?” Morgenstern said, talking over Harlow.

Morgenstern later said without proof that the Times piece was a “political hit” orchestrated with Democrats.

“It is NOT okay for you to accuse [the Times] with no facts with coordinating with the Democratic Party. Please stop doing that or this interview will end,” Harlow replied.

“You can put the entire thing to bed if the President would release the records and show the American people what he says is true. Why will he not do that?” she inquired.

After Harlow labeled her questioning as another press attack on the president, Harlow extended an invitation for him to appear on the show.

See the clip below.

END_OF_DOCUMENT_TOKEN_TO_BE_REPLACED

END_OF_DOCUMENT_TOKEN_TO_BE_REPLACED
Recent Posts
We and our partners use cookies on this site to improve our service, perform analytics, personalize advertising, measure advertising performance, and remember website preferences.Ok