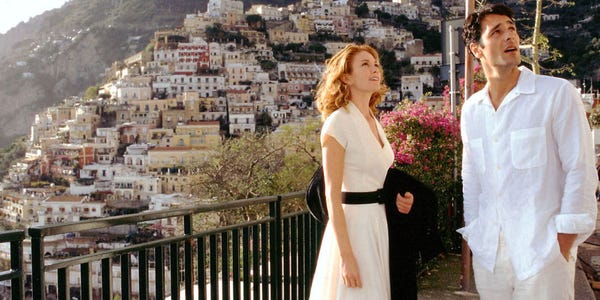 Many actors usually give the "never say never" answer when it comes to doing a sequel to one of their memorable movies. Except for Diane Lane. She is pretty certain we will never see an "Under the Tuscan Sun" sequel.

"Oh, I don't think so," Lane told Insider when doing press for her upcoming movie "Let Him Go," when asked if there has ever been talk to do a sequel to her beloved 2003 romantic drama in which she plays divorcee Frances Mayes, who buys a broken down villa in Tuscany to start a new life — and find love.

"Not without [director] Audrey [Wells], and she's not with us anymore, I miss her terribly," Lane said speaking of the movie's director and writer. Wells died of cancer in 2018.

"Under the Tuscan Sun," based on the best-selling memoir by author Frances Mayes, was a solid moneymaker ($58.8 million on an $18 million budget) despite mixed reviews (62% rating on Rotten Tomatoes).

Lane's performance earned her a best actress Golden Globes nomination, but the movie turned into a classic once it hit cable and streaming services thanks to Lane's fantastic performance and the idyllic Italian locations.

In fact, the movie has become so popular that a tourist service in Italy does a dedicated "Under the Tuscan Sun" vacation package that takes you to the places where the movie was shot, including the small town of Cortona where Mayes' villa was located.

But without Wells at the helm Lane said she would not entertain the idea of a sequel, despite having heard rumors from the movie's producer Tom Sternberg over the years that there has been interest.

"I've heard they want to do more, but I'm not a fan of the concept of continuing forward," she said.

She said that should be left to franchises.

"Something like 'The Bourne Identity,' you know there are going to be more," she said.

So sorry "Under the Tuscan Sun" fans, you'll just have to keep enjoying the original movie.

END_OF_DOCUMENT_TOKEN_TO_BE_REPLACED

END_OF_DOCUMENT_TOKEN_TO_BE_REPLACED
Recent Posts
We and our partners use cookies on this site to improve our service, perform analytics, personalize advertising, measure advertising performance, and remember website preferences.Ok