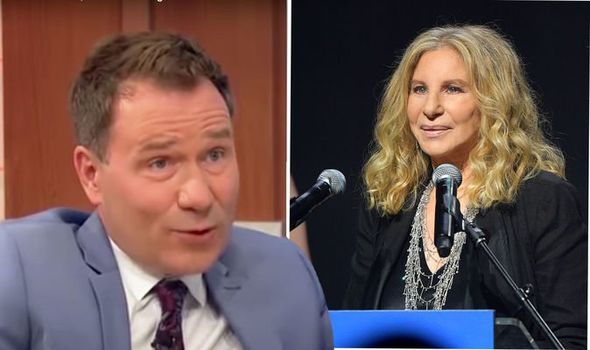 In a new interview, Good Morning Britain’s entertainment editor Richard Arnold reflected on his 25 years on breakfast television and the guests he had interviewed. One memorable moment that has stayed with him is the time singer Barbra Streisand, 79, paused their interview to fix his face.

The 52-year-old said he was so starstruck by Barbra, his top lip began to sweat during their chat.

While he tried to continue, his flustered look didn’t go unnoticed by the singer who proceeded to help him.

Richard explained: “I sat down and we had a little bit of a preamble about her album and I made it quite clear I was a fan.

“Then we started the interview, but halfway through she said, ‘Stop!’ I thought, ‘Oh goodness me, this has never happened before’.

“She then picked up a tissue, leant forward and mopped my top lip because the lights had made me break out into a bit of a sweat.”

The Good Morning Britain host said she added: “’We’ve got to take care of each other, right?’”

“I felt like I’d been anointed by Barbra,” he told OK! Magazine.

Richard also addressed the moment he interviewed Mariah Carey after co-host Ben Shephard warned him about her specific requests.

The presenter said that while she is portrayed as a diva, she was quite the opposite.

“It turned out to be great. She loves the British accent and there wasn’t even a hint of a diva about her.”

He went on to say he also enjoyed getting to know “magical” Celine Dion and Dolly Parton.

Richard began his television work on BBC as part of The Sunday Show.

In 2012, he was a contestant on Strictly Come Dancing with dance partner Erin Boag.

He joined Good Morning Britain when the show began in 2014.

Richard is a regular reporter on the breakfast programme alongside the likes of Susanna Reid, Ben, Kate Garraway, Ranvir Singh, Adil Ray and Charlotte Hawkins.

He said his friendships with his ITV co-stars “mean a great deal”.

Away from the TV, he has worked various other jobs such as a knife-thrower’s assistant and dancing at the Blackpool Tower.

Good Morning Britain airs weekdays from 6am on ITV.