As a longtime TV producer on shows like Family Guy, Vicious and Will & Grace, Gary Janetti is no stranger to a good joke or quick wit. So, when he turned his Instagram account into a meme generator, satirizing Prince George, it should come as no surprise it was a big hit on the internet — and eventually would serve as inspiration for The Prince, an animated series on HBO Max parodying the entire royal family.

“It wasn’t something I ever expected to do,” Janetti tells ET. “I kind of created the Instagram [account] in my head.”

And with each new post, he offered up wry and sometimes savage takes in the voice of the young royal — it’s a modern day Suri’s Burn Book, if you will — while garnering comments from the likes of Lisa Rinna of the Real Housewives and amassing hundreds of thousands of fans.

Over time, the Prince George that Janetti created was very Shakespearean, but in a contemporary way. “I took a kid but gave him the aspirations of King Lear, these grand things of wanting,” he says, explaining that he’s equally obsessed with the crown as he is with pop culture and in his place in the world.

So when the opportunity came to adapt the memes for the screen, Janetti started thinking bigger. “Like, how do I expand this bizarro, alternate world,” he says of the fictional characters he had already thought about while poking fun at those inside and outside of the palace.

And on the show, it’s having Prince George getting obsessed with the fact that Kelly Ripa doesn’t follow him on Instagram and watching the great lengths he goes to to befriend online. “It’s galling to this person who’s going to be the King of England and Kelly Ripa is not really aware of him,” Janetti says, explaining how “these little things become very big moments for the character.” 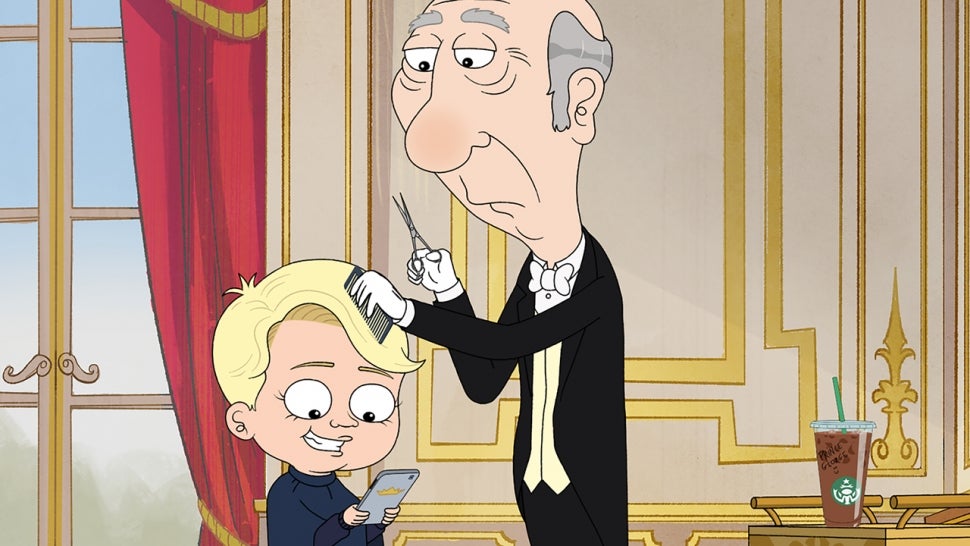 Given that each episode was roughly 12-14 minutes, he wanted to pack in as many ideas as possible, “so it would kind of click along very fast,” he says, adding that he had fun going from writing his version of Prince George to writing for 20 new personalities, each a bit more ridiculous than the last.

In the case of Princess Charlotte, who is voiced by Sophie Turner, the idea of her being a secret Russian spy was “too perfect,” Janetti says. “That’s such a bizarre, kind of other element that seemed like it would be fun to explore with that character.”

When it comes to the cast, Janetti says they’re “all wonderful and bring something really unique” to the series. And more importantly, “everybody understood the humor. That everything about the show was meant with affection and was this ridiculous and silly alternate world,” he adds.

If there was anyone on the show who had the most to worry about, it was Bloom, who is neighbors with Prince Harry. “I’m not someone who wants to poke fun at anyone normally, but this was so clever, witty and affectionately done,” the actor told The Hollywood Reporter, with Janetti going on Watch What Happens Live in August to say that the actor told Harry about the series and that “he seemed to have a good sense of humor about it.”

Largely funny, the humor can occasionally be groan-inducing, especially when it feels like the show walks right up to that line without crossing over it. When asked about whether there were discussions about how far to take jokes or when to hold back, Janetti says he “wanted the freedom to just see where it went.”

While there has been some pushback on the series by those who think The Prince goes too far with some of its jokes about the royal family, Janetti says the reaction that he’s been getting is from people who are really enjoying it. “Many people have reached out to me through Instagram,” he says, adding, “I’m sure there are people who feel the other way as well. But fortunately, I haven’t been aware of that.”

At the end of the day, when it comes to what he’s created with Instagram and now the series, “It’s a space that I’ve enjoyed being in,” Janetti says.

And given that The Prince ends with a post-credit cliffhanger — a very Dynasty moment — he’s already thinking about what happens if the series gets renewed. “I plan to pick up the show, hopefully in a season 2, in the exact second we left off,” Janetti says of the moment when George’s butler sees the missed call from his boss. While it’s too early yet, he hopes to find out if they’re officially continuing the royal satire “very soon.”

The Prince is now streaming on HBO Max.