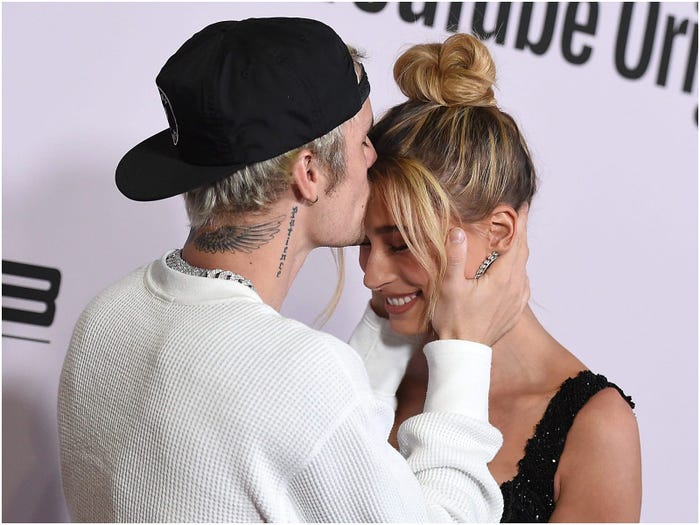 Justin Bieber is putting off fatherhood until his wife, Hailey Bieber (née Baldwin), is ready to have children.

On Tuesday's episode of "The Ellen DeGeneres Show," the musician, 26, spoke about the couple's plans to one day have kids, telling Ellen DeGeneres that he's intentionally leaving space on his back for tattoos dedicated to his future offspring.

When the host asked how many children he wants, he replied, "I'm going to have as many as Hailey is wishing to push out."

He continued, "I'd love to have myself a little tribe, but it's her body and whatever she wants to do."

The Grammy-nominated artist said that the model, 24, would like to have "at least two or three" children. And while the couple, who tied the knot at a New York City courthouse in 2018, intend to become parents in the future, Justin said his wife isn't quite ready yet.

"Hailey still has some things she wants to accomplish as a woman," he told DeGeneres, adding, "I think she just is not ready yet, and I think that's okay."

Watch the conversation below (beginning at the 4:10 mark).

Last month, Hailey publicly denied pregnancy rumors, telling her Instagram followers that Us Weekly was about to publish a story claiming that the model was expecting her first child.

"Since I know you guys were about to break your lil story @usweekly I'm not pregnant. So please stop writing false stories from your 'sources' and focus on what's important aka the election," she wrote on her Instagram story on November 6.

In her and Justin's October cover story for Vogue Italia, the model said she's in no rush to become a mother.

"The strange thing is that I've always wanted to have children early, but now that I'm married, I feel less of an urge," Hailey said. "I am an ambitious girl with many projects. It will happen, but not now."

Though Hailey is mostly known for her modeling career, she's also branched out in other directions.

She's previously worked with major beauty brands like Bareminerals and L'Oréal, and it was rumored that she was launching her own makeup line, though it hasn't been released.

Hailey also appeared in a Netflix documentary called "American Meme" (2018), which pulled back the curtain on some of the largest social media celebrities' lives.

During Justin's March visit to "The Ellen DeGeneres Show," he was applauded for his response to the host's question about how many children he and Hailey want to have.

"I think it's up to Hailey because it's her body," he said.

END_OF_DOCUMENT_TOKEN_TO_BE_REPLACED

Powerful tornado rips across Alabama leaving people trapped in their destroyed homes and cars as major winter storm hits Midwest A destructive tornado has hit Alabama, trapping people in their homes, damaging buildings and downing trees The tornado hit Fultondale shortly after midnight, and Jefferson County was placed under tornado

END_OF_DOCUMENT_TOKEN_TO_BE_REPLACED

The Daily Star’s FREE newsletter is spectacular! Sign up today for the best stories straight to your inbox Police are racing to identify 19 burned bodies found in trucks amid fears of a cartel crackdown. The bodies were discovered with gunshot wounds and are thought to have been migrants from

END_OF_DOCUMENT_TOKEN_TO_BE_REPLACED

Donald Trump ‘may engage in warfare with Iran’ warns expert Ambassador Majid Takht Ravanchi said Iran is waiting for the new US President to lift sanctions and rejoin the 2015 Joint Comprehensive Plan of Action (JCPOA), which Mr Trump pulled out of. The UN ambassador also shared there has been

END_OF_DOCUMENT_TOKEN_TO_BE_REPLACED
Recent Posts
We and our partners use cookies on this site to improve our service, perform analytics, personalize advertising, measure advertising performance, and remember website preferences.Ok