Katie Piper has undergone an emergency procedure on her oesophagus after choking on food.

The TV star revealed that she was left unable to swallow her own saliva after her oesophagus closed up on Monday night.

The 37-year-old explained that she has issues with her oesophagus due to scar tissue sustained when she swallowed some of the sulphuric acid thrown at her in a brutal attack in 2008.

Katie posted a picture of herself in a hospital gown, and wrote on Instagram: ‘SO, last night I choked on some food which led to spasms in my oesophagus, which meant it closed up, meaning I couldn’t swallow even my own saliva and ended up in A&E for an emergency procedure on my oesophagus (not the way to start a week).

‘I’ve got a long history of treatment with my oesophagus, I’ve got three strictures of tight scar tissue from what happened previously and this is something I’ve been aware of but hasn’t happened in years.

‘But, out of surgery and it went very well and I just ate ice cream which felt heavenly! Huge thank you to the NHS doctors and nurses that did she an incredible job and were so attentive 💛 now for a restful day.’

Writer Juno Dawson wrote: ‘Crikey! Get well soon love’, while AJ Pritchard’s girlfriend Abbie Quinnen wrote: ‘Sending you so much love & a very quick recovery! You are a superhero.’

In her Instagram stories post-surgery, Katie said: ‘I’ve just woken up from the procedure… I feel like a different woman. I feel so happy. Drowsy, but so happy.

‘I went into the theatre not being able to swallow even my saliva. I’ve just come out, I drank the best orange juice in the entire world. It feels so good to be able to drink liquids, oh my god. 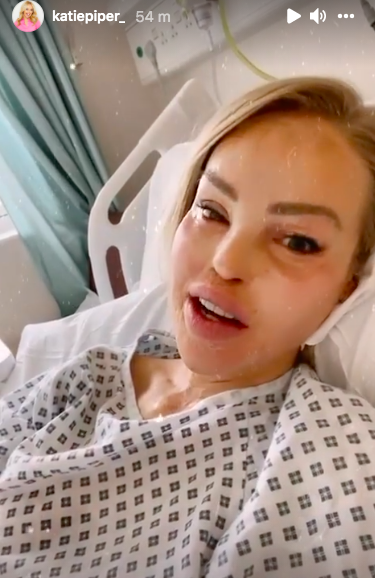 ‘The NHS are just amazing. Amazing nurses, doctors, everybody – amazing.’

Katie has undergone over 100 operations, including procedures to clear oesophagus blockages, skin grafts and eyelid surgery, to treat the injuries and scarring caused by the acid attack.

In 2008, two days after she was raped by ex-boyfriend Daniel Lynch, Katie had acid thrown in her face by Stefan Sylvestre, on the orders of Lynch.

The attack left Katie blind in her left eye and with extensive burns.

Sylvestre was released from prison last year, while Lynch remains in jail having been given two life sentences.

Katie has since gone on to become a TV presenter, activist and author, and has welcomed two daughters, Belle, seven, and Penelope, three, with husband Richard Sutton.