The ‘Tupac Back’ rapper takes to his Instagram Stories to share videos of his confrontation with the pilot, who makes the allegation only seconds after he steps on the plane.

AceShowbiz –Meek Mill has just had an unpleasant experience during his latest travel on a plane. The Philadelphia rapper has blasted a pilot for being “racist” after he and his friends were accused of smoking weed on a private jet even before they departed.

The “Amen” hitmaker claimed he just stepped on the plane when the pilot confronted them. He captured their intense argument on camera and made use of his Instagram Stories to share the clips on Friday, October 29.

In the first video, the 34-year-old star was heard telling the pilot, who stood next to him, “So you just said we were smoking on the plane. We just came on here 30 seconds ago.” The pilot said his claim wasn’t baseless, because he allegedly “smelled it.”

Meek continued to challenge the pilot, “Where were gonna smoke it when we just stepped on here 30 seconds ago?” The pilot eventually rest his case and returned to his cabin to fly the plane, but not before the “Ima Boss” spitter had some words to say to him. “You act like a real racist right now. What the f**k is wrong with you?” he shouted.

In the caption of the first video, he described what happened. “He asked was we smoking weed on his plane… We just got on 20 seconds ago … Racist p***y slowed my whole day up???” he wrote. “I need to book a plane in NYC ASAP!! His energy from when we walked up I knew he racist!” He went on claiming, “Just look what company is this jet under.”

Meek didn’t mention where he was headed to, but earlier that day he posted a Story about taking a jet to attend a party. “Lets go to the A tonight on some jets for @mrrugs Black party ….. put some bands up we out!!!!” he wrote in his previous Story. 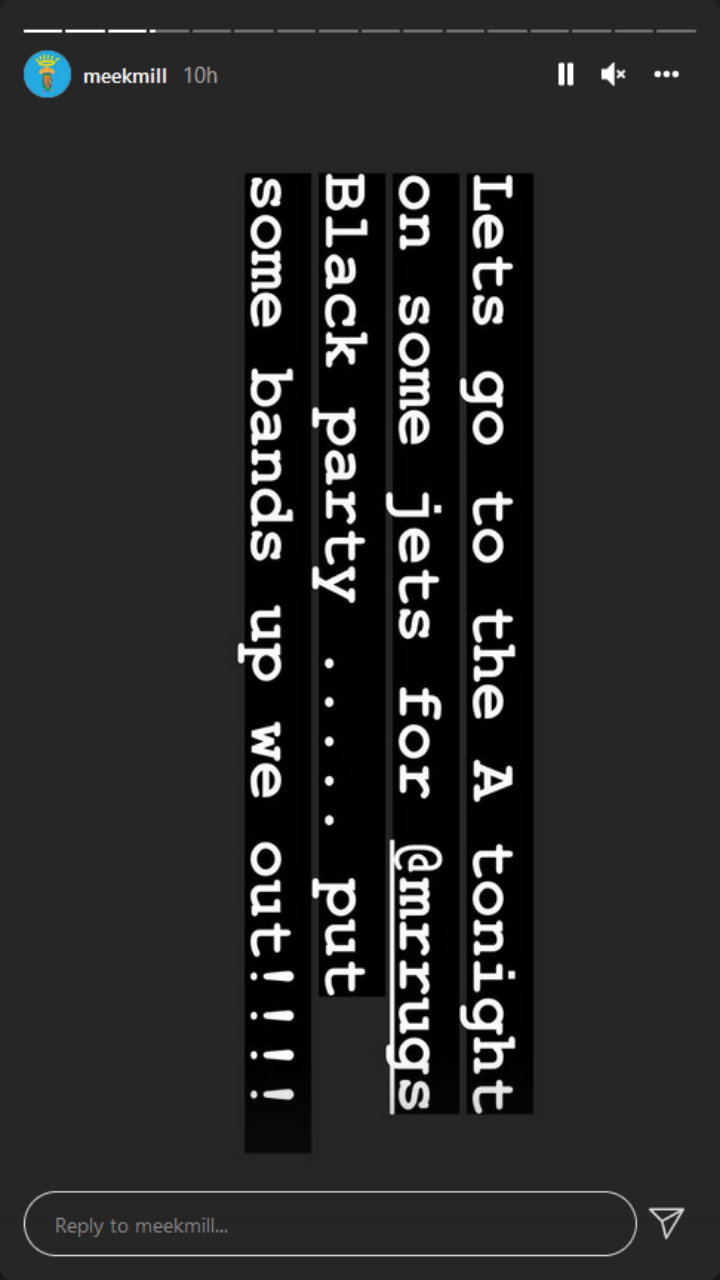 Meek Mill posted about taking a jet to attend a party.

It’s unclear though if the confrontation on the plane happened before or after he went to the party.