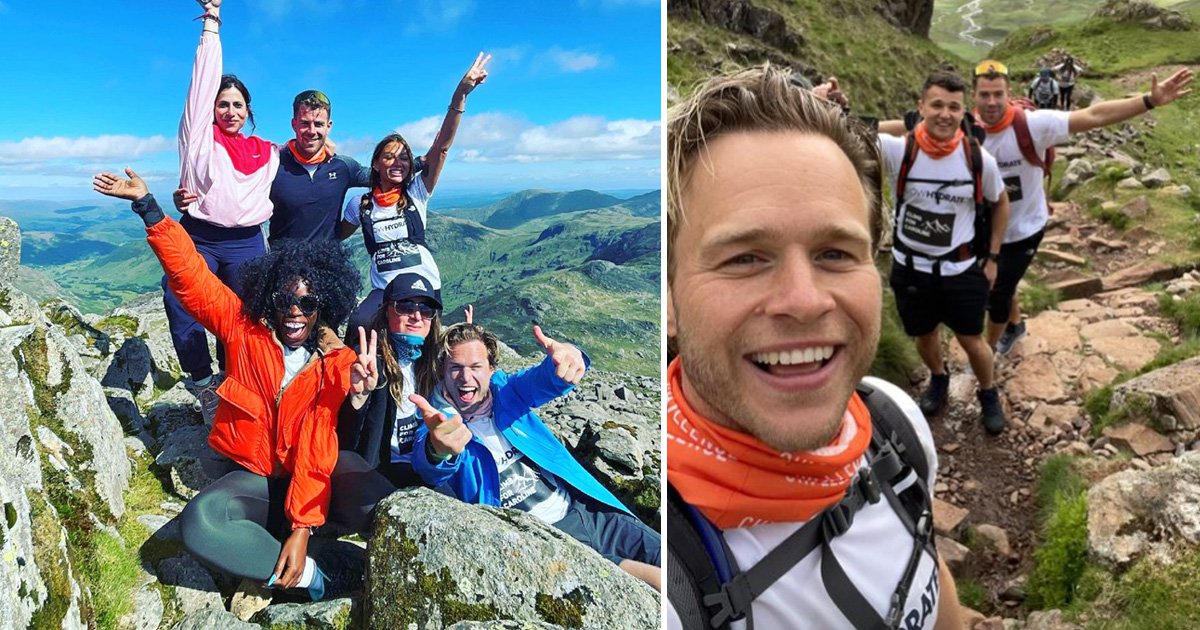 Olly Murs is halfway through his charity trek in Caroline Flack’s memory, joining several of the late presenter’s pals on the mission.

The former X Factor star is taking part in the Climb 4 Caroline trek which will see him reach 24 peaks in 24 hours, writing Caroline’s initials at the top of each one in her favourite lipstick.

Caroline died by suicide in February 2020 at the age of 40 and the trek aims to raise money towards the mental health charity Samaritans. They have since reached over £17,000 donations, which is almost 90% of their £20k target.

During day one, Olly, 37, was seen belting out a song at the top of his lungs after reaching the top of one peak, and tucking into a somewhat hearty lunch of a tuna and sweetcorn sandwich.

He was joined by Caroline’s friend and personal trainer Bradley Simmonds and her close pal and make-up artist Lou Teasdale.

After completing seven peaks in the first day, Olly wrote in an Instagram post: ‘DAY 1 completed ✅ On our Climb for Caroline! Was super tough but we smashed it together! This pic was clearly taken at the start 🤣💪🏻 for anyone who is wondering we did 7 peaks so far = Rossett Pike, Allen Grags. Ill Grag, Scafell Pike, Broad Crag, Esk Pike and Bow Fell.’

Bradley added in his own post: ‘12 hours of hiking was tough but we dug deep and had a great laugh sharing many memories of our favourite Caroline ❤️⁣ We go again tomorrow at 7am for another 12 hours ⛰⁣.’

Sharing an update on the donations raised, he added: ‘All in the loving memory of Cazza 💙⁣

‘And we’ve raised £15,000 for @samaritanscharity which is incredible so far 🙌🏼 but we can do better.. If you would like to donate to a great cause (Suicide prevention) then head to my bio and donate what you can.’

Caroline’s family have supported the trek and previously said in a statement: ‘Thank you to everyone taking part and to those at home who are supporting us. Good luck and thank you for taking the time to raise vital funds and awareness for Samaritans.’

Sarah Ball, head of fundraising at Samaritans, added: ‘We are extremely grateful to Bradley for choosing to raise vital funds for Samaritans, which will help us be there at any time of day or night to support anyone who is struggling to cope.

‘Suicide is complex and every single death by suicide is a tragedy that devastates families, friends and communities.

‘We wish Bradley and Caroline’s friends and family the best of luck on the hills with their fundraising challenge.’