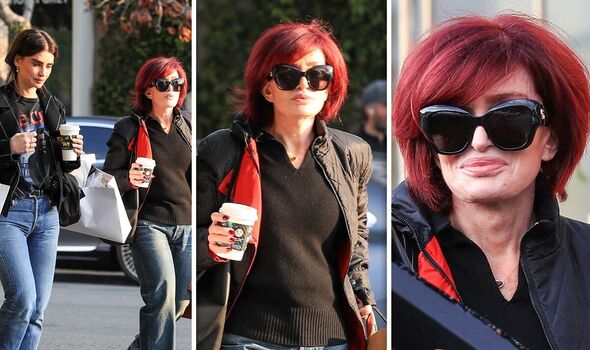 Sharon Osbourne stepped out in Los Angeles with her daughter Aimee

Sharon Osbourne looked in good spirits as she stepped out just weeks after she was hospitalised for a medical emergency.

Sharon Osbourne, 70, enjoyed a spot of shopping on Thursday with her daughter Aimee, 39.

The pair stepped out in Los Angeles wearing matching black jackets and jeans.

The outing comes just weeks after Sharon was hospitalised following a “medical emergency” as she was filming Night of Terror with her son Jack, 37.

A few days later, Sharon confirmed she had returned home and told fans she was “doing great”.

Sharon Osbourne and her daughter Aimee stepped out in Los Angeles

Sharon Osbourne and her daughter Aimee wore matching black jackets and jeans as they went shopping in Melrose Place.

Sharon Osbourne carried shopping bags and a coffee as she wandered around LA wearing dark sunglasses.

Sharon Osbourne smiled as she was pictured just weeks after her emergency hospitalisation.

Sharon Osbourne updated fans on her recovery after she was rushed to hospital after an incident while filming Night of Terror with her son Jack.

Sharon’s husband Ozzy Osbourne as faced his own health battle

Ozzy Osbourne went public with his declining health in 2020 and revealed he had been diagnosed with Parkinson’s disease.

Sharon and Ozzy Osbourne with their daughter Kelly

Sharon, Ozzy and Kelly pictured in May 2021 filming an episode of Celebrity Watch Party.

Sharon and Ozzy Osbourne have been married for 40 years