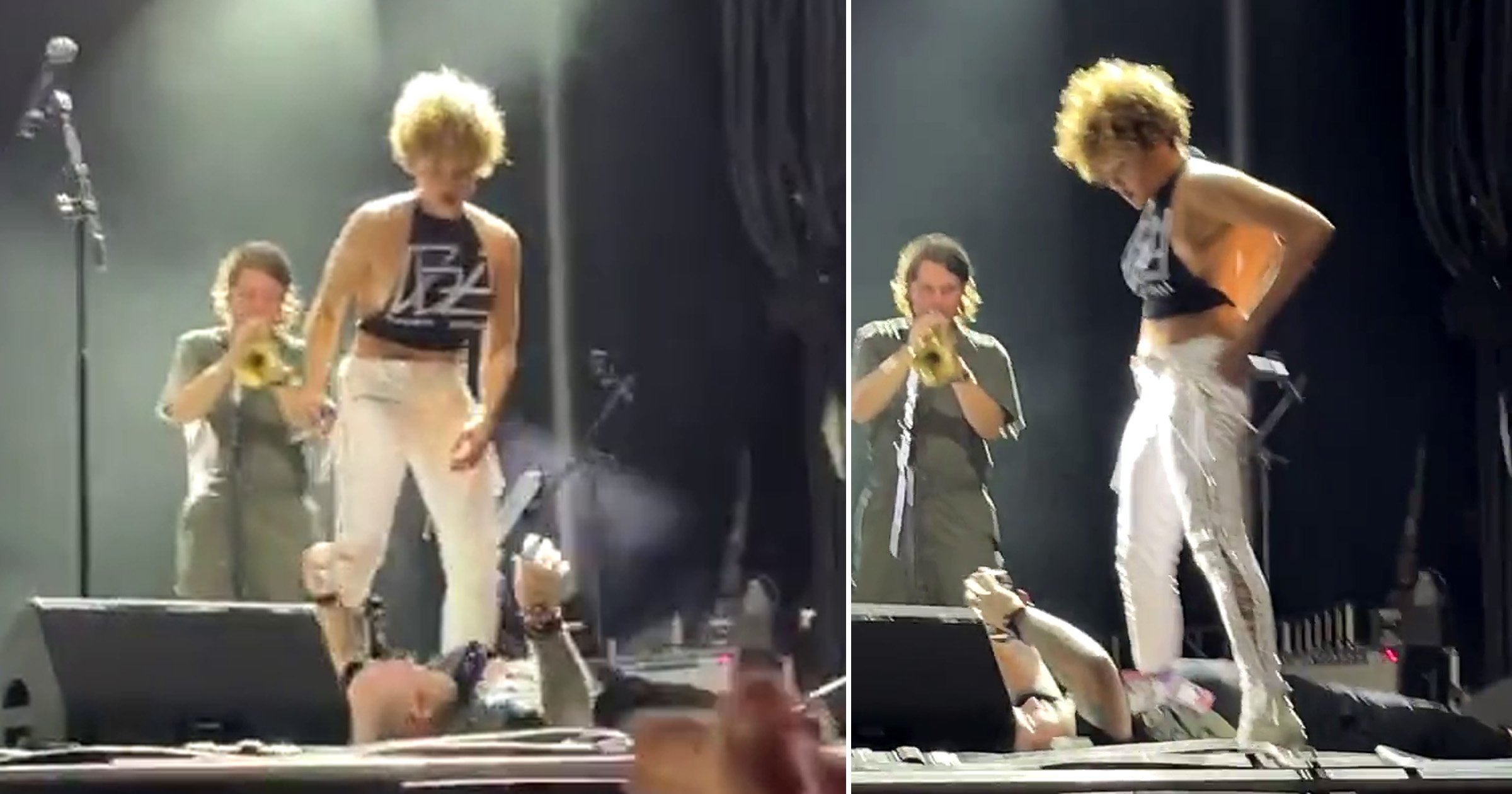 Brass Against singer Sophia Urista has addressed the shocking moment she urinated on a fan’s face during a recent concert.

The group – who is known for playing metal covers of bands including Smashing Pumpkins and System Of A Down – were on stage performing Rage Against The Machine’s banger Wake Up to a packed crowd, when singer Urista told fans she needed to pee.

After inviting a punter on stage, Urista was then seen pulling down her trousers and squatting over the man, who was lying on the stage.

The onstage moment captured at Welcome to Rockville festival in Daytona divided the internet, with some calling it ‘rock and roll’ and others sharing their disgust.

Amid the intense criticism, though, in a statement on social media the band insisted their lead singer got ‘carried away’ and said it wouldn’t happen again.

Now breaking her silence amid the criticism, Urista shared her own statement online, apologising and conceding she ‘pushed’ it too far.

She wrote: ‘I want to speak to my performance at Rockville metal festival in Daytona.

Urista continued: ‘I love my family, the band, and the fans more than anything and I know that some were hurt or offended by what I did. I apologize to them and want them to know that I didn’t mean to hurt them. [sic]’

Her post concluded: ‘I am not a shock artist. I always want to put the music first. I’m grateful for all of your continued love and support.’

According to reports, Urista was earlier heard saying during the gig: ‘Get my man with the can on his head ready, ’cause we’re going to bring him onstage and I’ma p*** in this motherf***er’s mouth.’

She reportedly added: ‘I gotta pee. And I can’t make it to the bathroom. So we might as well make a show out of it.’

In videos uploaded to social media, as Urista urinated on the concert-goer’s face, the band played on like normal while people in the crowd voiced their shock at what they were witnessing, with one person heard saying ‘oh my god’ as others cheered.

Afterwards, the singer pulled up her trousers and told the man to get off the stage before she was seen laying a towel down over the area.

In response to the moment, a statement to the band’s Twitter on Saturday read: ‘Sophia got carried away. That’s not something the rest of us expected, and it’s not something you’ll see again at our shows.

‘Thanks for bringing it last night, Daytona.’

Still, many social media users asked whether the man involved had willingly been urinated on as the band replied to concerned and curious punters.

One social media user wrote: ‘Things that could have happened other than peeing/assaulting someone:

‘2. Pull a Fergie [in response to Black Eyed Peas frontwoman Fergie revealing she once wet herself on stage]

To this, the band replied: ‘We hear the suggestions and won’t be doing that again, but no assault occurred there.’

After another asked whether the band considered the mess left for cleaning staff, they wrote: ‘Sophia actually cleaned it up herself after the set. Lysol and paper towels.’

In response to people asking whether the concert-goer knew what was going to happen, the band insisted: ‘Yes. Several comments made about peeing prior to it actually happening. Invited to stage.’