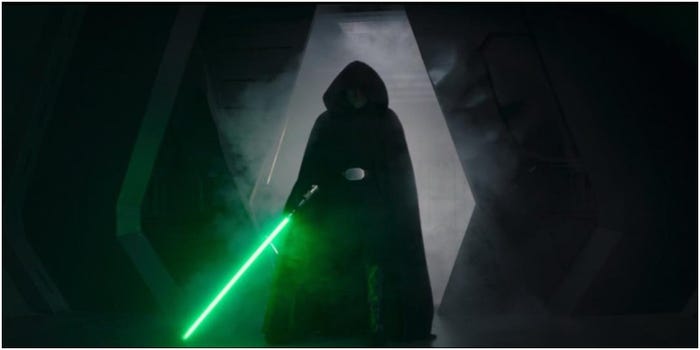 "Star Wars" fans are comparing a mind-blowing scene from the season finale of "The Mandalorian" to one of the most epic moments of "Rogue One."

Be warned, there are spoilers below after "The Mandalorian" finale that left fans in delight, shock, and, for some, tears.

At the end of the finale, Mando, Grogu, and company are holed up in the bridge of Moff Gideon's starship with Gideon imprisoned, although a platoon of dark troopers are about to burst through the blast doors.

Just as they are, however, a single X-wing lands in the ship's hanger bay and a hooded passenger gets out and begins fighting his way through the dark troopers and to the bridge.

The mysterious passenger is revealed to be none other than Luke Skywalker himself, and at one point he enters a dark corridor shrouded in fog and ignites his lightsaber before battling his way through a horde of enemies.

This is exactly what Darth Vader did during the climax of "Rogue One" as he attempts to retrieve the Death Star plans from the rebels.

It's safe to say, fans are absolutely loving the mirrored scenes between the two Skywalkers, father and son.

One fan wrote that "it is unwise to face a Skywalker in a hallway."

Another said that "the parallels in this episode are amazing."

And a third fan thinks that "Star Wars" hallway scenes are "always a treat," with Luke's epic hallway battle not just Vader's, but Maul's too. The "Maulway" scene came in the finale of the final "The Clone Wars" series.

Meanwhile, other fans were just ecstatic to see the return of original trilogy hero Mark Hamill as Luke Skywalker.

Another fan was overwhelmed after the episode, and felt the emotion radiating from Luke, Grogu, and Mando: "Such a rollercoaster of emotions in this episode, I'm so sad and happy and excited, I can't even explain how much I love this show and how excited I am for Season 3."

In short, fans are grateful for such an incredible end to a wonderful series, with one writing: "Luke Skywalker and Grogu. Some of the best 'Star Wars' content ever. Thank you Favreau and Filoni."

END_OF_DOCUMENT_TOKEN_TO_BE_REPLACED

END_OF_DOCUMENT_TOKEN_TO_BE_REPLACED
Recent Posts
We and our partners use cookies on this site to improve our service, perform analytics, personalize advertising, measure advertising performance, and remember website preferences.Ok