Strictly Come Dancing judge CRAIG REVEL HORWOOD reveals why he fell in love with Dan Walker, how he coped with Covid isolation and his preparations for Panto season

At home on the sofa, in isolation after testing positive for Covid, Strictly judge Craig Revel Horwood had what can only be described as an epiphany about one of this year’s more controversial celebrity contestants.

‘I rather fell in love with Dan, and I didn’t expect to,’ he recalls.

‘Looking at his dancing, I had no clue why people were voting for him before. But suddenly I thought, ‘Oh, I see why – he’s really sweet.’ I learned a lot about why people vote for who they do.’

Dan, of course, is Dan Walker, the BBC breakfast show host turned Strictly contestant, whose gangly and wooden performances have earned him a place in the bottom three of the leaderboard for three consecutive weeks but who has, to date, miraculously escaped the dance-off.

Craig’s conversion is particularly surprising given Dan was on the receiving end of some particularly harsh adjudication from the notoriously exacting judge.

It was Craig, after all, who awarded Dan and his professional partner Nadiya Bychkova’s recent American Smooth a paltry four in contrast to the enthusiastic eights from his fellow judges – and one nine (from Anton du Beke.)

Last week, Craig – the only judge to have been in every show since Strictly started in May 2004 – was forced to miss filming for the first time in 17 years after testing positive for Covid.

It meant no scoring paddle for him: instead, he had to watch the Strictly contestants dance on television like the rest of us, an experience he describes as both surreal and illuminating.

‘On one level it was a bit of an out of body experience,’ he says. ‘But it was enlightening. Becoming a punter meant I saw the show for the first time through the eyes of the audience and gained an entirely different appreciation for it.

‘I saw stuff I never normally get to see – all the special effects but also the contestant videos and stories beforehand. I felt completely emotionally involved.’

For all he enjoyed this new perspective, 56-year-old Craig is champing at the bit to get back to the judge’s hotseat on Saturday after emerging from isolation on Wednesday.

‘Missing the show was quite alarming for me because I never miss work,’ he says of his enforced stint at home near Rutland Water which he shares with horticulturalist fiancé Jonathan Myring.

Resolutely double-jabbed – ‘why people are up in arms about it I have no idea’ he says of the vaccine refuseniks – Craig says he’s enormously grateful for what he sees as the protective bubble the vaccine has given to him and others. 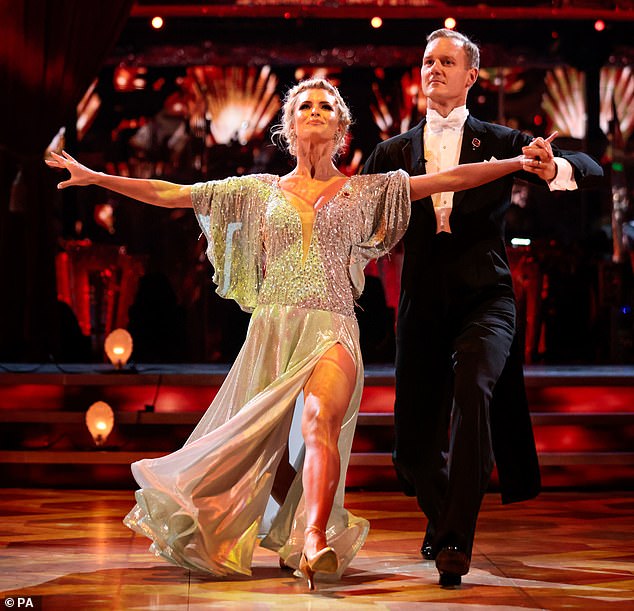 ‘A lot of my friends got Covid last year before the vaccination programme and one ended up almost hospitalised,’ he says.

‘He was the same age as me, and that’s scary, but now because of the vaccine and boosters, people are a lot more protected. I didn’t get it badly – I felt like I just had a small cold – and I think that proves that the vaccine is working. I could have been really ill.’

Craig tested positive for Covid the day before he was booked to have his booster jab nearly two weeks ago. He had recorded the November 13 episode of Strictly the previous evening but awoke having lost his sense of smell and taste.

‘I did a lateral flow which was positive, then I did the PCR test and that came back positive, so then obviously I had to isolate for 10 days,’ he says.

Marooned at home, he confides that instead of climbing the walls with boredom he used the enforced time off to paint them.

‘I literally was painting the walls,’ he laughs.

‘I got five coats of fabulous paint on my cupboards, too. I took all the drawers off. I changed all the knobs. And my food was delivered to my bedroom door by my lovely, Jonathan – thank goodness he was here to look after me.’

One reason he’s nesting is that he has a new home: earlier this year Craig relocated to Rutland Water from his previous home in Hampshire to be close to his fiancé’s family and seems to have fallen in love with his new home county.

‘I love it, it’s absolutely stunning,’ he says. He and Jonathan – who proposed on a holiday in Tanzania shortly before the first national lockdown last year – are planning to get married locally, although plans to wed next year have been put back until August 2023. 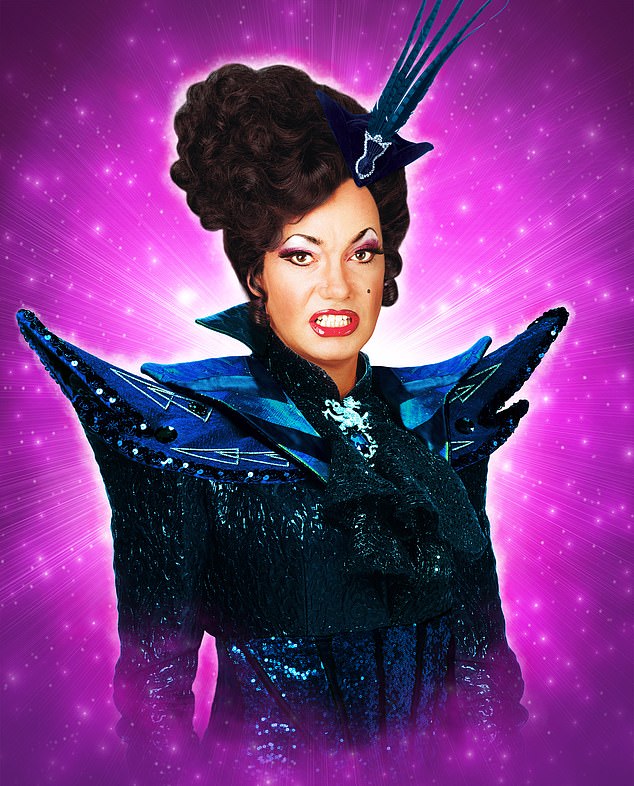 Craig’s comments are surprising as Dan was given harsh adjudication from the judge, who is due to start rehearsing for his part as the wicked stepmother in a new production of Cinderella

‘We can’t get a marquee until then,’ laughs Craig. ‘It’s so hard because everyone has postponed their weddings so it’s impossible to get things. We decided to allow ourselves some time.’

Craig is particularly thrilled by the warm reception given by Strictly viewers to John and Johannes, the show’s first male dancing duo who are both gay, following on from last year’s ground-breaking female pairing of boxer Nicola Adams with professional dancer Katya Jones.

‘I was trying to get this to happen for five years,’ he says of the introduction of same sex partnerships.

‘People were in high dudgeon at the idea of two men dancing together but my view was if you don’t like the idea darling, then switch off. So good on them for being brave and putting it out there.’

He calls it another ‘small step’ on the road to acceptance of people’s sexuality. ‘You can’t choose who you are or what you are,’ he says.

‘I think it’s awful that there was that judgment in society, but thought processes are changing and helping make us a more all-encompassing community. This is another small step in that direction, which is great.’

He also thinks John and Johannes stand a very good chance of making it to the final, along with the ‘extraordinary’ EastEnders actress Rose Ayling-Ellis, the show’s first deaf contestant, and AJ Odudu, whose dancing Craig also loves. ‘I think those three are real standouts’ he says.

He’s itching to get back to his judge’s chair tonight. ‘I cannot wait,’ he says. ‘I’m a real stickler for the show must go on.’

Show or indeed shows, for on Monday Craig is also due to start rehearsing for his part as the wicked stepmother at the Southampton Mayflower Theatre’s production of Cinderella, which also features former Strictly contestant and now good friend Debbie McGee as fairy godmother.

With an epic set and special effects – not to mention Craig’s ‘enormous’ camp-as-Christmas costumes – it promises to be a lavish, fun-filled affair.

‘There’s lots of innuendo, and lots of Strictly nonsense,’ he says. ‘I love playing the evil character, it’s great fun.’ 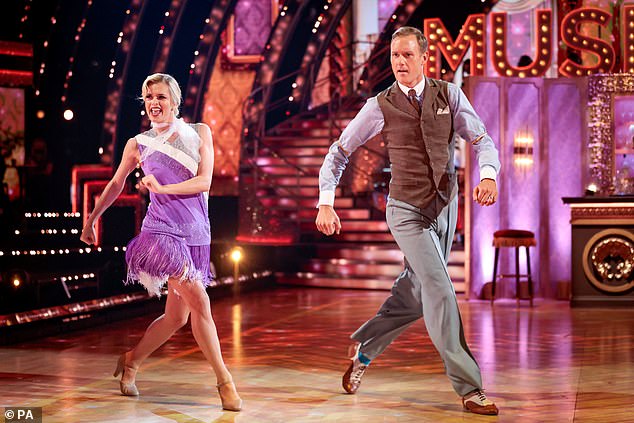 Not just that though: the Australian-born Craig started his performing career in live theatre and is passionate about spreading the magic of a shared experience with an audience in real time.

He has been dismayed by the devastation Covid has wreaked on the arts and is fervently hoping that – aided by a bumper panto season – theatre is on the road to recovery.

‘The last couple of years have been horrendous for the arts,’ he says. ‘Amazing venues have stood empty, creativity has been stunted, and whole swathes of people were put out of business.

‘It’s not just the actors who’ve been affected, but backstage and front of house staff right through to the cleaners and the people who run the coffee shop next door.’

It’s one reason he’s thrilled by the unfolding panto season, traditionally one of the biggest income spinners for theatres, and one which helps keep them running during more fallow periods.

‘It’s so important we encourage people to go and see these shows,’ he says. ‘Things are opening up thank goodness – it’s just wonderful now that entertainment is coming back for people because two years is such a long time.’

He has a special affection for panto, viewing it as a kind of ‘gateway drug’ for live theatre.

‘It gets children off their iPads and their gaming devices and gets them reacting to live productions – and hopefully that sets them up to become theatre goers for the rest of their lives which is so important,’ he says.

‘It’s something that the whole family can go to, and adults get as much pleasure out of it as children because they often work on two levels with the innuendo. And people love the fact that you get sing-a-longs, and the kids can shout and scream.’

Last year was a case of so near yet so far: Craig was all set to take the stage as the nasty Sheriff of Nottingham in a production of Robin Hood in Woking, only to find it all over before it even began: the socially distanced production was thwarted by Covid restrictions on its opening night. 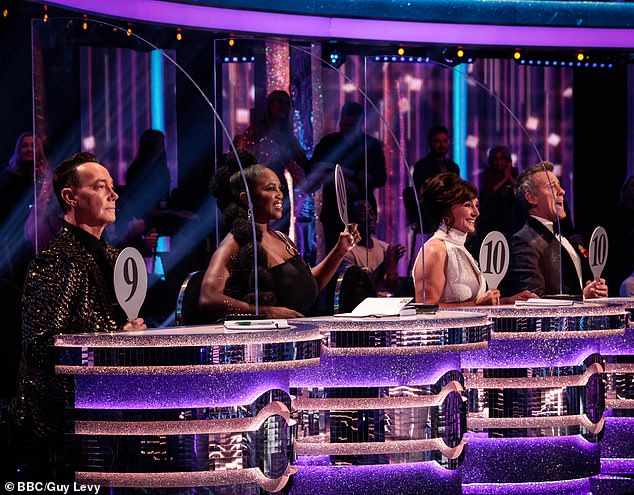 Last week, Craig (pictured with Motsi Mabuse, Shirley Ballas and Anton Du Beke) was forced to miss filming for the first time in 17 years after testing positive for Covid

‘Woking went into tier three on the opening night, so we performed it with just four front of house staff and then we all went home,’ he says. ‘It was quite bizarre.’

Everyone involved in Cinderella is praying that the same thing won’t happen this time. While Strictly, has had more than its fair share of Covid dramas it has managed to work around them, something trickier in a panto environment particularly if one of the leads is struck down.

‘We’ve got to get through this,’ he says. ‘I think everyone will eventually be touched by Covid in one way – there’s not many people I know who haven’t had it yet.

‘I think everyone will eventually get it in one way, shape or form and hopefully we’ll build up a natural immunity. In the meantime, we’ve got to just get out there and deal with it the best we can.’

Ever the pro, he’s hoping that fortune smiles on his Cinderella, and on the last few weeks of Strictly.

Will his sofa epiphany mean he is a little kinder to the contestants? Sadly, for Dan Walker, it seems not.

‘I’m there to do a job darling,’ he says. ‘Nothing that has happened will mask my judgement about what I see on the dance floor.’

* Craig Revel Horwood is starring in Cinderella at the Mayflower Theatre in Southampton from 10 Dec – 2 Jan 2022. To book tickets visit, www.mayflower.org.uk