Home » Celebrities » Tallulah Willis, 27, Rocks Pink Bikini On The Beach One Month After Getting Engaged

Tallulah Willis, 27, Rocks Pink Bikini On The Beach One Month After Getting Engaged

The bride-to-be looked stunning in a pink bikini, as she lounged on the beach alongside her fiance, Dillon Buss.

Tallulah Willis, 27, and her film director beau, Dillon Buss, spent the weekend enjoying the warm weather at the beach with friends. The young designer shares a fun-filled weekend with her Instagram followers when she uploaded a picture of herself rocking a bright pink bikini, and she looks fantastic. The youngest daughter of actors Demi Moore, 58, and Bruce Willis, 66, simply captioned the picture, “Basking in her glow,” in which she’s seen posing with model Clara Berry’s dog.

This new pic comes a few weeks after Tallulah disclosed her battle with body dysmorphic disorder, and revealed in a candid upload to Instagram that she had resented looking more like her dad Bruce instead of her mom Demi. “I punished myself for not looking like my mom [Demi Moore] after being told I was [my dad, Bruce Willis‘] twin since birth,” Tallulah wrote. “I resented the resemblance as I believed wholly my “masculine” face was the sole reason for my unlovability –  FALSE! I was/am inherently valuable and worthy at any life stage, at any size, with any hairdo! (As are you).”

Along with this candid confession and sharing images of herself from over the years, Tallulah also wrote a message about the triggers one may encounter on social media, and offered up advice to anyone in the same situation. “Breaks from social media,” she said, “I scroll 9GAG to disassociate instead. Memes are there to help!” 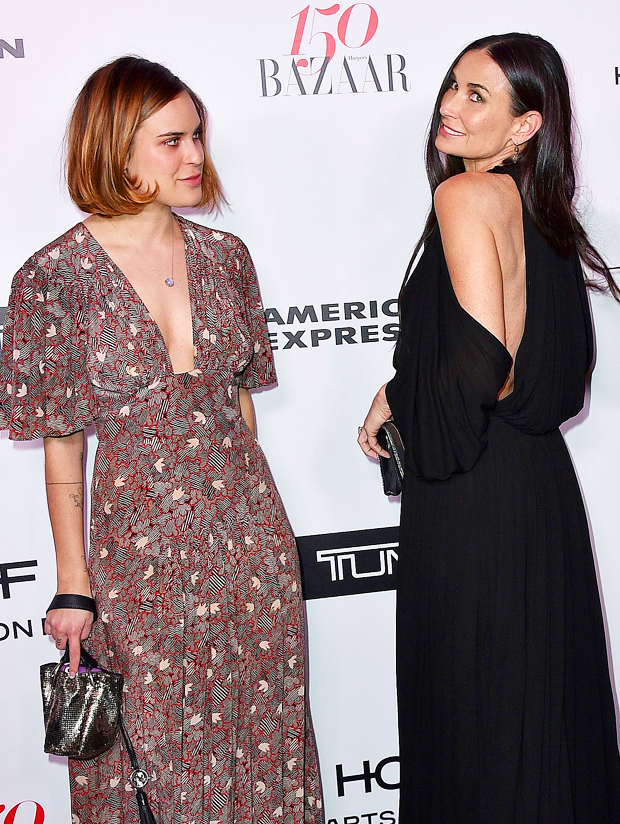 On May 4, Tallulah announced on Instagram that she was engaged to Dillon after a year of dating. She posted a picture of the moment Dillion got down on one knee to propose, as well as close up images of the engagement ring; an emerald-cut diamond, set on with four prongs and a gold band, designed by Brooklyn based jeweler Karina Noel. Her mother Demi described the evening as a “happy day” for their entire family, sharing a photo of the three of them and captioning it, “Congrats to my baby girl and her adorable beloved on their engagement! Happy Day for the whole family,” along with a ring and red heart emoji.