The Strange Event Donald Trump Is Hosting On 9/11

Normally the anniversary of September 11th is a time of reflection for the country. Each year, Americans take the time to look back on the day that changed the country, and the world, forever. Former president Donald Trump, a lifelong New Yorker, has always made it no secret that the Big Apple is a place that will always remain close to his heart. When Texas senator Ted Cruz seemingly attacked what he called “New York values” during a Republican debate in 2016, the Queens-born businessman shot back with, “New York is a great place, it’s got great people, it’s got loving people, wonderful people. When the World Trade Center came down, I saw something that no place on Earth could have handled more beautifully, more humanely than New York.”

Seeing how Trump is quick to defend the city that helped make him into the person he is today, a lot of people are surprised over his plans for the 20th anniversary of 9/11. While some politicians both present and past might be mourning at Ground Zero, it looks like Trump’s got other plans. Keep reading below to find out what he’ll be doing. 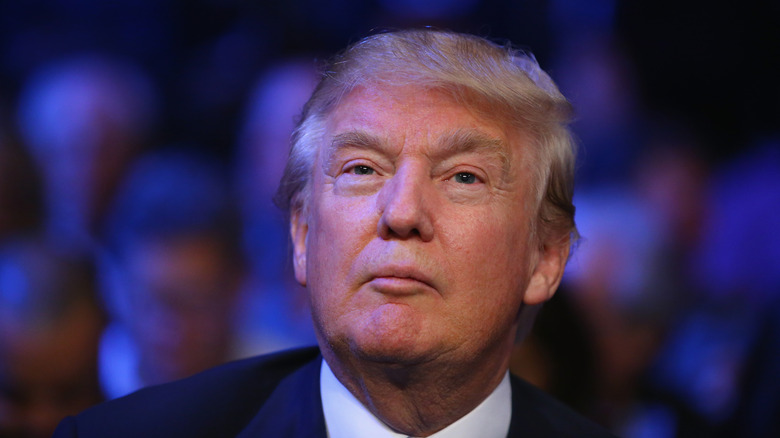 According to reports, Donald Trump will be hosting a boxing match on Miami on the 20th anniversary of September 11th. Not only that, but the former president will be also providing commentary on the much-anticipated Evander Holyfield and Victor Belfort match, which will take place at the Hard Rock Hotel in Miami, according to the Daily Mail. He will be joined by his son, Donald Trump Jr. “I love great fighters and great fights,” the former commander-in-chief said, per ESPN. “I look forward to seeing both this Saturday night and sharing my thoughts ringside. You won’t want to miss this special event.”

But then again, this shouldn’t come as a surprise to his critics and detractors, who for years have even questioned whether or not Trump was even at Ground Zero following the attacks. Even though Trump insists that he went there with “men who worked for me to try to help in any little way that we could … We were not alone. So many others were scattered around trying to do the same” (per USA Today), others are questioning his recollection of what had actually happened, as detailed in NPR. Richard Alles, who was the battalion chief of the New York Fire Department and was at Ground Zero for “several months,” told PolitiFact that he has “no knowledge of [Trump] being down there,” and had his workers been there, there would have been a record. While Alles doesn’t deny that it’s possible Trump was there, he claims to know no one who ever saw Trump at Ground Zero in the wake of the attacks.