Home » A Curated Ear or Two

A Curated Ear or Two

A designer of fine jewelry, Ms. Tash has been creating earrings for pierced ears since 1993, when she opened a studio in the East Village in New York. And in recent years, as she has added shops worldwide, she has devised adornments for lots of other pierced body parts.

“What is surprising to me,” she wrote in an email, “is the pent-up demand we saw during the pandemic, while our stores globally were closed” and the brand was holding virtual styling sessions online.

“We found that people needed the creative outlet and shared their dreams and plans for future piercings,” Ms. Tash said. “I was concerned mask wearing and the elastic loops around the ear cartilage could discourage curations, but thankfully that was not the case.” And now that the stores have reopened, she added, some appointments are booked months in advance.

It seems lots of women — and some men — are craving ornamentation, especially multiple piercings in the curves and whorls of the ear, creating personal constellations of twinkling studs.

Ms. Tash was a pioneer of the curated ear, using the appendage as a blank canvas for an aesthetic arrangement of jewelry that becomes a kind of self-expression. Since half of the face often may be hidden by a mask, it seems the ears have taken a turn in the spotlight. 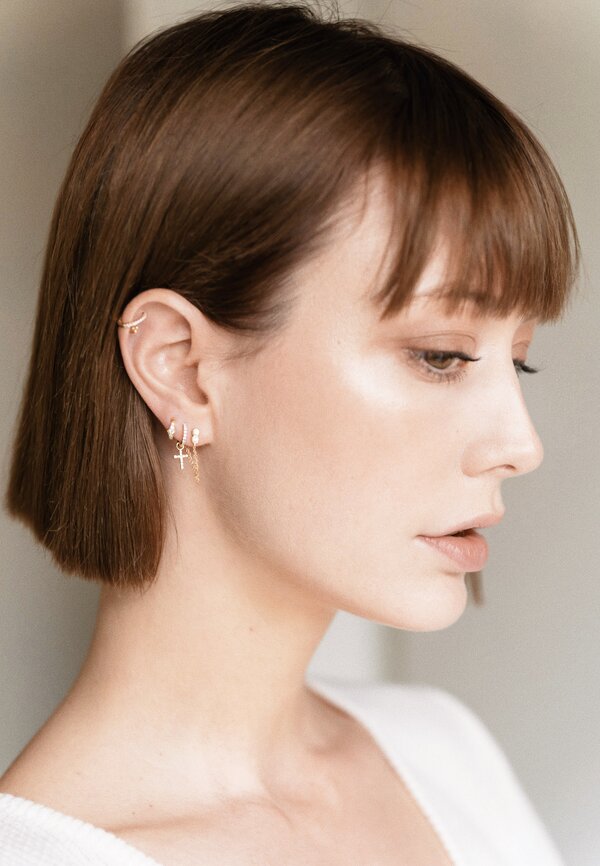 The trend has been part of society’s refocus on personal space, like the rush to change interior décor, said Frédéric Godart, a sociologist and associate professor at Insead business school in France.

After all, he said, the public no longer thinks of piercing — or tattoos — as limited to gangsters or sailors.

“There has been a process of legitimation,” Mr. Godart said. “And when that happens, the practice spreads across social classes, which leads to an availability of superior services, with higher hygienic standards. If there is demand from the upper classes, a niche is created.”

Like Ms. Tash, Nawal Laoui, founder and owner of Persée, a jewelry brand based in Paris, was ready to fill that niche. “We wanted to renew the image of the piercing, to dust it off and make it more elegant, precious and contemporary,” she said.

In October, between national lockdowns in Paris, Persée opened its “bar à piercing” in the Galeries Lafayette department store on the Champs-Élysées. But what was intended to be a pop-up offering became so popular that it has become a fixture — at least for now. (The brand also offered an in-home service during the city’s lockdowns.)

Using the “ear map” displayed for reference, customers “become the creator of their ear, with this personalization aspect to choose, down to the millimeter, where they want to pierce,” Ms. Laoui said.

The classic — three holes on the lobe — is still the most popular choice, she said. “And after that, little by little people go up the ear. When they are reassured, they will make a fourth hole in the cartilage, for example.”

At Galeries Lafayette, the service is limited to the ears, but Ms. Laoui said more and more navel and nose piercings had been requested.

Ms. Laoui introduced Persée in late 2017, the result of her desire to create jewelry that could be worn every day. “Skin jewelry so light we forget we’re wearing it, but that has a certain singularity,” she said. “And the idea of the piercing came to me.”

Her earrings start at 160 euros (about $195) for a single 18-karat gold hoop, with prices rising to more than €1,000 for styles adorned with diamonds. The piercing fee is included in the earring purchase. “It’s an opportunity that creates another opportunity,” Ms. Laoui said. “Women see a piece they love, a piercer is on-site, and sometimes they decide to get not two, but three holes.”

Camélia Jordana, 28, a French actress and singer, has had lobe piercings since she was little, but since she discovered the Persée piercing bar, she now has four in each ear. “Those jewelry pieces are now an integral part of my everyday look,” she wrote in an email. “They are very elegant and quite sensual. They fit both a casual day look and a more sophisticated night outfit.”

She said she never takes the earrings out — and likes that she can sleep with them without damaging her ears, the way earrings with clip backs or the standard butterfly-shaped fasteners would do. Persée studs have a screw-like flat closure, while the hoops have a hinge that closes.

Ms. Jordana’s favorite Persée piece is the gold hoop with a delicate chain embellished with diamonds, which she said is both dreamy and versatile. For a more noticeable look, she adds a statement piece like the Orbite, a double hoop with a dangling diamond, which she said she considers a timeless design.

Persée introduced the piercing service in Qatar in February 2020, before international borders began to close. “It was a challenge because women are veiled in the Middle East and I was wondering if they would want to have their ears pierced,” Ms. Laoui said. “But it ended up being a big hit in Qatar; women would sometimes get eight piercings on one ear.”

In addition to the salons in Qatar and Paris, she plans to open others this year, at the Dubai Mall and Al Hazm mall in Doha, the capital of Qatar.

Such chic piercing salons have been popping up in New York, London and other cities, but the type of piercing does reflect the cultures. Regular earlobe piercings are commonplace in Tokyo, for example, but piercings in other ear areas still tend to be associated with subcultures. The look seems increasingly present in Seoul, South Korea, however, thanks to K-pop celebrities.

Marie Gilliot, 35, a fashion blogger based in Paris, got a piercing in her right ear’s helix — the outer rim — at Maria Tash in 2008, when she was working in New York as a model. Since then, most of her other piercings have been done at the Parisian jewelry concept store Mad Lords, and she now has a total of eight. (She said she would stop there as eight is her lucky number.)

She said she likes the edgy look: “I think it suits me; it breaks the good-girl image that I tend to give off.”