BGT 2019: Amanda Holden and Alesha Dixon opt for SAME style trend – where to buy the look

Amanda Holden has been keeping her fans in the know this week, by posting style insights on Instagram. Sharing snaps of herself with her 1.1 million Instagram followers, she’s been telling fans exactly where to buy the look. Today was no different, with Amanda taking to social media to sharing a behind-the-scenes capture. The 48-year-old could be seen wearing a sparkling minidress.

The glitzy garment had statement padded shoulders, and a tassle which draped downwards at her waist.

She paired it with a Lucy Choi London high heels, and Stephen Webster Jewellery.

Amanda’s black and silver outfit is by the designer Julien Macdonald.

But, it was the design of the bottom of the dress which was of particular interest.

It had a diagonal cut bottom, meaning the right side was significantly shorter than the left. 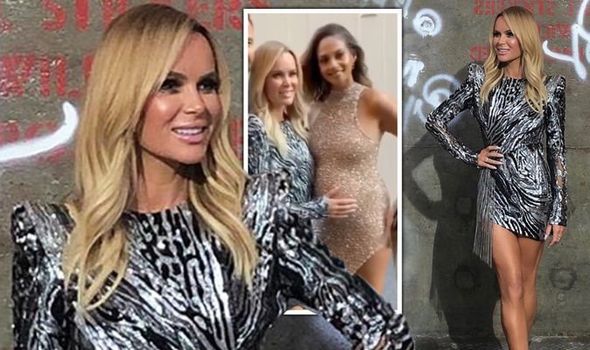 While the pair both wore outfits with the diagonal aspect, the looks were very different.

Also opting for a glittery choice, Alesha’s dress was a beige tone, and had a bodycon fit.

In one capture shared on Instagram, the singer’s colleague and friend Amanda could be seen placing a hand on her growing baby bump.

Amanda also posted a photograph of herself on Instagram.

“It’s the last night of the #BGT Semi-Finals,” she wrote. “Another night another dress.”

“You’re the gift that keeps on giving,” swooned another admirer.

The TV presenter has worn a number of stunning designs this week.

The dress had off-the-shoulder sleeves, and a huge billowing skirt.

It had been adorned with white floral detailing.

A day earlier, Amanda opted for a look by Nicolas Jebran.