Home » Fashion » Everyone Has a Theory About Shopping Carts

Everyone Has a Theory About Shopping Carts

The next time you go to the grocery store, consider the ordinary shopping cart as something more than a rattling basket blocking your parking space.

In the 1930s, an American grocer named Sylvan Goldman invented the precursor to the modern day shopping cart, using a folding frame that was fixed on a set of wheels. He hoped that people would buy more groceries if they did not have to carry heavy baskets as they browsed.

But over the decades, the shopping cart has evolved from its mundane existence as the centerpiece of every grocery store run.

Like the Campbell’s Soup can, it has become an unlikely icon in a subculture that celebrates the common object.

Shopping carts have been the focus of books and films, and their use examined in magazine columns and classrooms as tools to explain how humans behave in public. They have found a dubious niche on the internet as the stars of a YouTube show, followed by half a million people. They have even inspired musicians: The steady clacking of a cart rolling down a street was the inspiration for both the sound and the words in Neil Young’s 1994 song “Safeway Cart.”

They are also a nuisance. Legislators and store owners across the United States have struggled with how to prevent the carts from being stolen, left in handicapped parking spots, discarded on sidewalks, abandoned at bus stops or tipped into creeks. 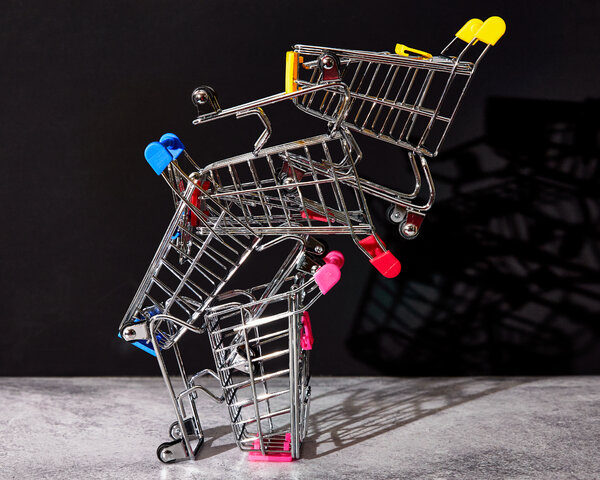 In 2005, a cart infiltrated the British Museum, when the artist Banksy paired one with a cave man on a piece of fake prehistoric rock art — and then secretly installed the rock in a gallery, unnoticed for days.

Another Banksy creation, the painting “Show Me the Monet,” incorporated discarded carts in nature. It sold at auction for about $10 million in December.

John H. Lienhard, a history of technology professor at the University of Houston, described shopping carts as a “flash of genius” that altered American life during an episode of his public radio show, “The Engines of Our Ingenuity.”

Decades after that 1995 broadcast, Dr. Lienhard is still trying to explain how the utilitarian origins of shopping carts broadened into cultural appeal.

“That means the technology of the commonplace is terribly important,” he said. 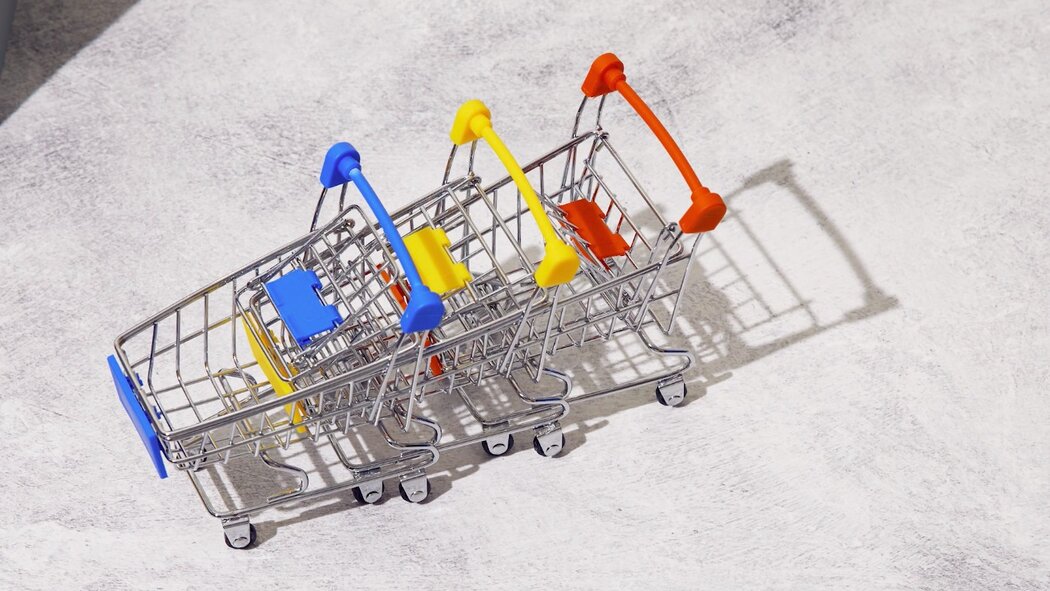 Far From the Supermarket

The 2009 film “Cart” illustrates what Dr. Lienhard called the “symbiotic relationship” of humans and shopping carts.

In the film, a shopping cart is given a mind of its own, navigating the perils of city streets as it searches for a boy who has left his jacket in the basket. The cart then saves the boy’s life by blocking an oncoming car.

Jesse Rosten, the director, said the idea arose when he and a friend spotted an overturned cart in a parking lot. A sad song was on the radio as they drove past it, adding to the potential for cinematic melancholy.

“We laughed the whole way home, imagining back stories for this down-and-out cart who was struggling against the world,” he said. “We’ve all seen abandoned shopping carts out in the world, and the film is one take on how carts end up where they do.”

Portraits of carts in the wild are also captured in the 2006 book “The Stray Shopping Carts of Eastern North America: A Guide to Field Identification.”

The Buffalo artist behind the book, Julian Montague, spent seven years photographing carts in dumpsters, in alleys, on lawns, wherever they turned up. “It is a weird object,” he said.

“Somebody can take it someplace and chop the wheels off, or take laundry to the basement,” he said. “Unlike a plastic bag, it has multiple lives.”

Carts as a Test of Character

Some people steal them. Others leave them wherever they like.

Private companies have gotten creative. In California, stray carts are reported on hotlines to companies that specialize in repatriating them to their store lots.

At the supermarket chain ALDI, shoppers unlock carts with a quarter, which is returned when the carts are. Some customers leave the quarter in the cart for the next person to use.

“We’re always amazed at the ‘pay-it-forward’ spirit that happens in our parking lots,” said Kate Kirkpatrick, communications director at ALDI. “As a result, we rarely run into issues with carts not being returned.”

On many days, Seth Sanders, 20, a clerk at Safeway in Bellingham, Wash., can be found dodging cars as he rounds up carts that people have left in parking spaces or shoved aside in the massive lot.

About a quarter of customers do not bother to return their carts, he estimated, which means he spends a lot of time doing it for them, in between bagging groceries, cleaning and finding items for customers.

Mr. Sanders has wrangled carts in the cold, in the rain, and in the smoke from wildfires. One customer, in a hurry, shoved a cart in his direction with such force that it hurt his leg.

“I want to say it is almost kind of selfish,” he said. “It is kind of a test of character. It is our job to pick up after people, but if it is the smallest thing you can do to help out, I feel like it is not a lot to help out a little bit.”

Of course, shopping cart slackers have their reasons.

In a 2017 column in Scientific American, the anthropologist Krystal D’Costa explored why people failed to return carts. It “hit a nerve,” she wrote in a follow-up.

In more than 2,000 comments on the magazine’s Facebook page, some said they were afraid to leave children unattended, or struggled with a disability, or feared making someone’s job obsolete. Within the past year, the so-called Shopping Cart Theory has become an article of faith on Reddit and other social media sites. The theory posits that the decision to return a cart is the ultimate test of moral character and a person’s capacity to be self-governing.

It is a theory fully embraced by the video vigilantes known as The Cart Narcs, self-appointed enforcers who confront shoppers trying to leave without returning their carts. The series has about 500,000 followers on Facebook and YouTube.

The Shopping Cart Theory has even reached academia — if middle school counts as academia. Students at the Lausanne Collegiate School in Tennessee were recently asked by Greg Graber, the school’s director of social and emotional learning, to analyze it in a class on critical thinking.

One student said anyone who noticed a wayward cart should just return it. Another warned against rushing to judgment. Mr. Graber agreed.

“It seems to be a popular belief now that people who leave their shopping carts in places are lacking in values and morals,” he said. But that belief “does not allow for growth or grace.” 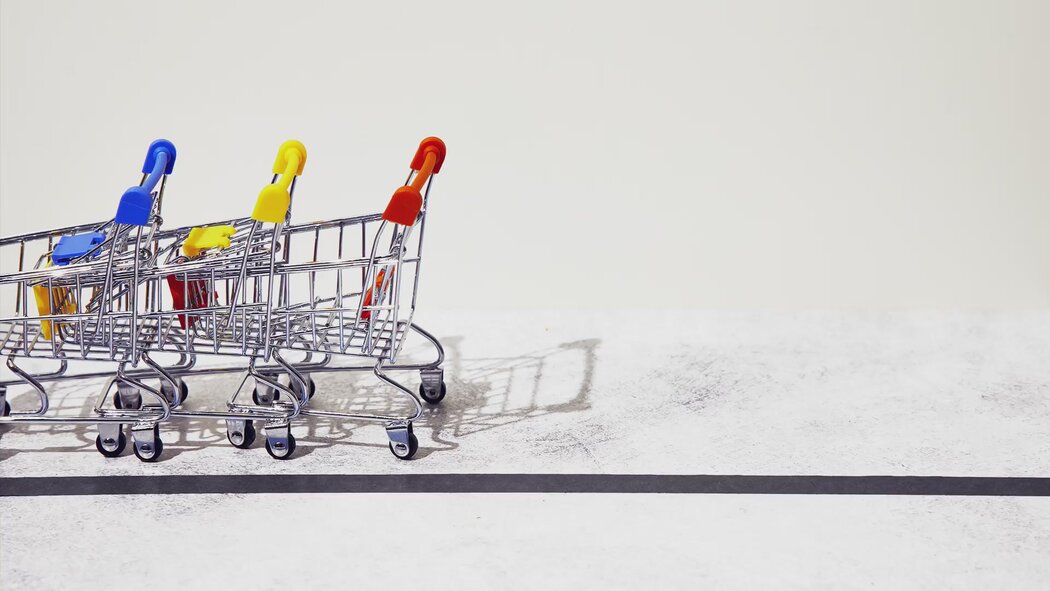 … and Here Come the Legislators

In April, the Shopping Cart Theory was cited in coverage of a proposed state law that would fine shoppers who did not return their carts.

Paul Aronsohn, a disability ombudsman for New Jersey, had approached State Senator Kristin Corrado with the idea. He said the state needed to deter shoppers who abandon carts in the wide spaces designated for people with disabilities.

Senator Corrado introduced Senate Bill No. 3705, which would impose a fine of $250 for doing so.

“Apparently it is a pet peeve to a lot of people,” she said.

One person who would benefit is Kelly Boyd, 41, of Hamilton Township, N.J., who has used a wheelchair since she was 9. When she drives her van to the store and lowers a ramp to disembark in her motorized chair, she often finds a cart blocking her way.

So Ms. Boyd said she has to nudge it out of the way with her van, or drive to a remote part of the lot where she can use two spaces to get out. That has led to angry notes left on her car and confrontations with other drivers.

“Everything I do as a person with a disability takes longer and then to have to deal with that is more frustrating,” Ms. Boyd said. “It is surprising how some people do not care.”

This is not the only state legislation tackling shopping cart nuisances. Some places, like Los Angeles and Clark County, Nev., require wheels that lock when a cart is taken far from a store. Some cities in Washington impose fines on stores for wayward carts, and other cities are taking note.

Last year the board of supervisors in Fairfax County, Va., met to address “the visual clutter” of stray carts with a proposal to impose $500 fines on people who wheel them off store property.

“It is a real problem,” Jeffrey C. McKay told his fellow supervisors during the session. But others on the board argued that it would penalize people who are struggling economically and use the carts to get food home or carry their belongings.

One of the supervisors, Dalia A. Palchik, said that had been her childhood experience.

As immigrants from Argentina in 1989, Ms. Palchik said, she and her three siblings often accompanied their mother to the store and then pushed the cart to their rental house on the edge of Fairfax City. They had no car available.

The memory came flooding back during the discussion. “It was one of those things I was ashamed of as a kid,” she said in an interview. “Why are we criminalizing people trying to get to the grocery store?”

The ordinance is still under consideration.