Home » Fashion » Getting Married Where It All Began

Getting Married Where It All Began

On the first day of his first college class, Brandon Hsuan-Yuan Shih was nervously awaiting his turn to speak. He was in a freshman seminar at Princeton, and the students were asked to share something about themselves as an icebreaker. Mr. Shih had an answer prepared about how he loved music and playing tennis, until the woman sitting right next to him said the exact same thing.

“It was a very awkward situation for me,” said Mr. Shih, 27, with a laugh. “I didn’t want to just look like that guy who was just trying to copy the pretty girl’s answer.”

The woman sitting next to him was Wenyi Gu, who goes by Wendy, and despite Mr. Shih’s initial worries, they quickly hit it off. After class they learned that they lived in the same dorm, two floors from each other.

“We just got really close,” said Ms. Gu, 28. “I feel like we had an instant connection and chemistry.”

They had a few friends in common, but mostly found themselves hanging out together, confiding in each other as they navigated their first year of college.

“It was a very deep friendship,” Mr. Shih said. “It was not superficial at all.”

The people around them took notice, and when they both arrived back on campus for their sophomore year, one of Ms. Gu’s friends suggested that she and Mr. Shih’s relationship might be more than just a friendship.

“She mentioned that to me, and it kind of clicked in my head,” Ms. Gu said.

About a year and a half after they first met, they decided to go on their first date, and made reservations for lunch at an upscale restaurant. They were both nervous, but being overworked college students, they were also exhausted — they both overslept, and ended up missing the reservation altogether. 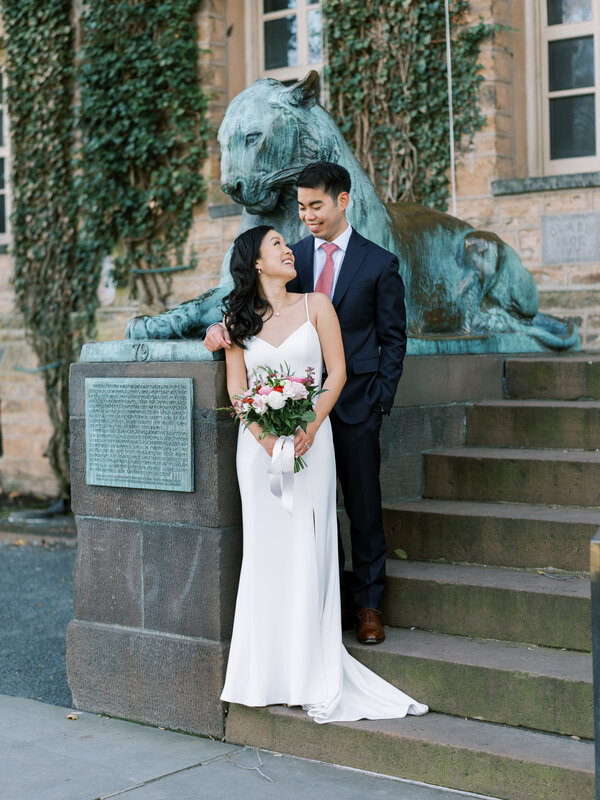 Instead, they went to a Panera Bread later that afternoon, where Ms. Gu tried to gracefully eat an enormous panini. She eventually asked Mr. Shih to look away, because she was so embarrassed by how messy it was.

“It’s always funny to us how self-conscious she was on that first date,” Mr. Shih said.

They dated for the rest of college, including eight months of long distance when Ms. Gu was studying abroad. After they graduated, they both moved to New York.

“I feel like a lot of our relationship has just been something we can’t really explain,” Ms. Gu said. “Everything has just been flowing so naturally.”

In August 2018, Ms. Gu moved to Washington, where she is currently a third-year law student at Georgetown. Mr. Shih, who is a fixed-income trader at Citadel in Greenwich, Conn., stayed in New York, and the couple began a long-distance relationship again.

“I think going through that long-distance experience in undergrad,” Ms. Gu said, “just gave me confidence that we could also do it after undergrad.”

In June 2018, Mr. Shih and Ms. Gu went for a walk in Central Park. Mr. Shih had been acting nervous all day, and right as they were leaving the park, he was hit with pigeon droppings.

“In retrospect, a sign of good luck,” Ms. Gu said.

That night they went out to for dinner, and when they got back to Mr. Shih’s building, he led Ms. Gu to the rooftop, where their friends were waiting with champagne. Mr. Shih turned to Ms. Gu, and asked her to marry him.

“The idea of making it official and being able to call Brandon my husband just makes me giddy and happy inside,” Ms. Gu said.

At the beginning of the pandemic, Ms. Gu’s law school classes went remote, and she moved in with Mr. Shih in New York, where she plans to join the law firm Latham & Watkins, in their New York office, in the fall. They were originally set to be married Sept. 27, but rescheduled because of the coronavirus pandemic. Instead, they were married Dec. 6, their anniversary as boyfriend and girlfriend, under the Blair Arch on the Princeton campus. Vivian Qin, a Universal Life minister and a friend of the couple since their college days, officiated.

END_OF_DOCUMENT_TOKEN_TO_BE_REPLACED

END_OF_DOCUMENT_TOKEN_TO_BE_REPLACED
Recent Posts
We and our partners use cookies on this site to improve our service, perform analytics, personalize advertising, measure advertising performance, and remember website preferences.Ok