Home » Fashion » Growing Together, While Apart

Growing Together, While Apart

Rosanna Fugate described her improbable relationship with Jackie Chang as a “learning journey.”

“Let’s start with the fact that to my knowledge, when we met, Jackie was 100 percent straight,” said Ms. Fugate, 34, the chief operating officer at Thistle and Spire, an online lingerie brand based in New York.

“Despite the increasing frequency of our hanging out,” Ms. Fugate said, “I considered our relationship to be purely platonic.”

Ms. Chang, 35, a senior director in New York at NBCUniversal, met Ms. Fugate in September 2015, when both were in their second year of an M.B.A. program at Harvard.

They enjoyed each other’s company, but the odds of a budding romance seemed longer than the restless nights that haunted Ms. Chang, who tossed and turned while thinking of ways to get back into Ms. Fugate’s orbit.

“Talking with Rosanna came so naturally to me, she was a breath of fresh air,” said Ms. Chang, who graduated from the United States Military Academy at West Point before serving seven years in the Army, having achieved the rank of captain. (She was last stationed at Fort Campbell, Ky.)

Needing an excuse to share her feelings with Ms. Fugate, Ms. Chang asked her for an opinion on a journal entry assignment for a leadership development class in which they were both enrolled.

“It’s hard to verbalize, but when you feel it, you just know it,” Ms. Chang said. “Every time I spoke with her, I knew it over and over again.”

In her journal entry, Ms. Chang confessed that she had feelings for someone but wasn’t sure if she should share those feelings.

“Jackie confided in me,” Ms. Fugate said. “I challenged her by asking what would she have to lose by sharing her feelings and pointing out that this was clearly on her mind for a reason, I even offered to role-play with her what that conversation would look like.”

A week later, Ms. Chang visited Ms. Fugate’s apartment and asked if she could read her next journal entry to Ms. Fugate. 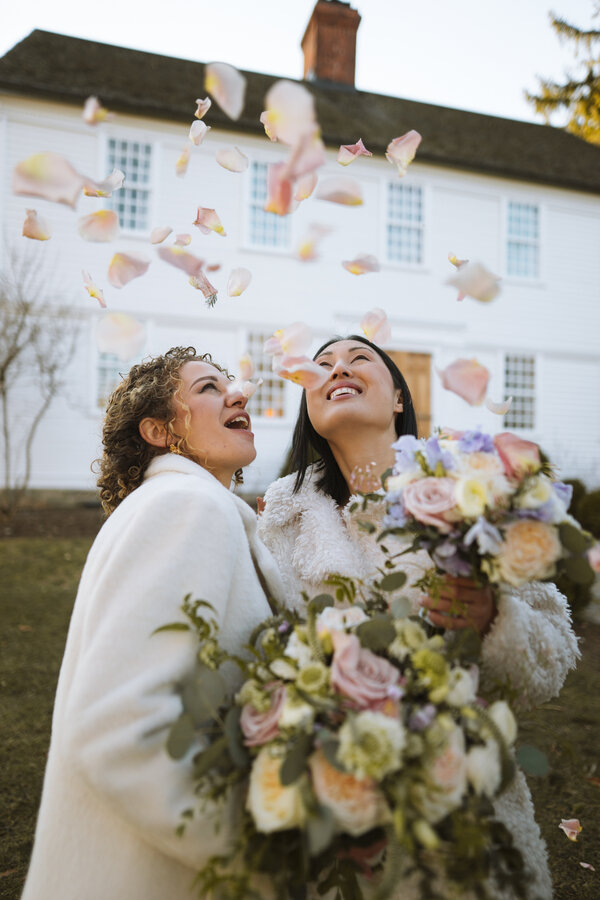 Ms. Fugate listened closely and soon realized that she was the person for whom Ms. Chang had those feelings.

“I quickly dismissed her as a confused girl with unintentional and misplaced feelings,” Ms. Fugate said. “She immediately reassured me that despite never having dated a woman before, her feelings were very intentional.”

After mulling it over, Ms. Fugate decided to give Ms. Chang a chance.

“Jackie was very genuine, what you see is what you get with her, and she was someone who I could trust,” Ms. Fugate said. “Most importantly, I could envision a future with her, so I decided to take the leap, and we have been together ever since.”

Shortly after both received an M.B.A., Ms. Fugate landed a job with Samsung in Seoul, while Ms. Chang took a job in Philadelphia with Comcast NBCUniversal based on the East Coast. In 2018, their long-distance relationship was brightened on two fronts. Ms. Fugate took another job, this one with Tesla in Fremont, Calif., and Ms. Chang came out to her mother.

“Jackie’s mother was very supportive and soon accepted me as Jackie’s girlfriend,” Ms. Fugate said, who lost her job in August 2020 and moved back to Stamford, Conn., where she has since been living with Ms. Chang.

The couple were married March 13 at Winvian Farm, a resort in Morris, Conn. The Rev. Daniel Rodriguez Schlorff, a Baptist minister, officiated and was the only other person present.

“It’s been quite a journey,” Ms. Fugate said. “We had to manage self-identity as well as the long distances between us for four years.

“All the while,” she added, “We needed to make sure that we were growing together, and not apart.”