Jennifer Lopez, 51, closed out 2020 with one last incredible performance — and several outfits — for her headlining set on Dick Clark’s New Year’s Rockin’ Eve with Ryan Seacrest 2021 on Dec. 31, which aired on ABC. She gave audiences a thrill with the broadcast debut of her new single “In The Morning.” JLo was standing on a twenty foot tall column with a white coat covered in six large white feathered layers that cascaded all the way to the ground. JLo donned a glittery rhinestone head mask before taking it off, tossing off the massive coat, and showing off a glittering tight pants and a blazer with dramatic shoulders.

Jennifer transitioned into a slow version of “Waiting for Tonight,” then stripped off her blazer to reveal a plunging sleeveless bodysuit as she broke into a cover of Aerosmith‘s “Dream On.” Jennifer then picked up the energy with her hit “Dance Again,” while doing just that with killer moves to close out her set. Fiance Alex Rodriguez, 45, could be seen among the few people allowed in the “audience,” taking video of his talented lady onstage.

Unfortunately, not many people got to witness J.Lo’s moves and sexy gown in person (except for hosts Ryan Seacrest, Billy Porter and Lucy Hale, of course). Due to the pandemic, the New Year’s Eve ball celebration in Times Square went virtual for the first time in its 114-year history, meaning that fans had to stream J.Lo’s performance from their television or phone screens.

J.Lo wasn’t the only celebrity who had the honor of being invited to Times Square amid this special year. Jimmie Allen was another artist on the performer lineup for the Dick Clark’s New Year’s Rockin’ Eve 2021 broadcast, while Cyndi Lauper and Billy (who’s co-hosted the telecast, and starred on Broadway with Cyndi) also joined this list as duet partners. Machine Gun Kelly also took the stage! 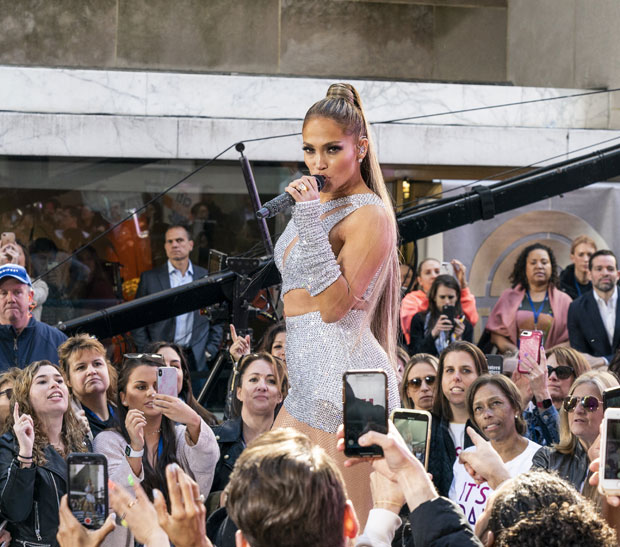 There were other performances, too, outside of the Dick Clark’s New Year’s Rockin’ Eve broadcast. Legendary singer Andra Day was a headliner at the ball drop celebration, and other artists like Gloria Gaynor, Anitta and Pitbull also performed.

Even amidst a pandemic, J.Lo has managed to have an incredible year. She started it off with her iconic Super Bowl LIV halftime show performance in February, so it’s a full circle moment to see J.Lo close out the year at another concert that’s broadcasting around the world. Sadly, J.Lo was supposed to tie the knot with Alex in 2020 as well, a ceremony that has been postponed multiple times. But, as you can see, J.Lo’s not letting a sudden change of plans affect what she does best: put on a good show.

END_OF_DOCUMENT_TOKEN_TO_BE_REPLACED

END_OF_DOCUMENT_TOKEN_TO_BE_REPLACED
Recent Posts
We and our partners use cookies on this site to improve our service, perform analytics, personalize advertising, measure advertising performance, and remember website preferences.Ok