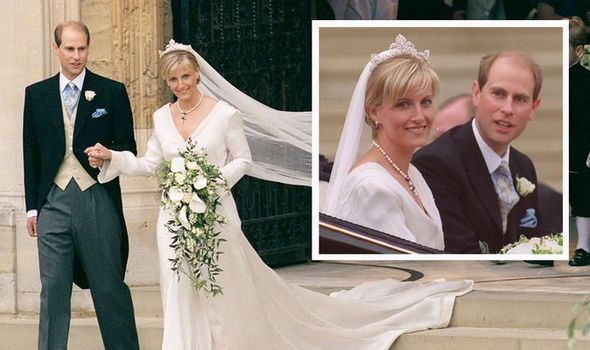 Sophie Wessex joined the Royal Family when she married Prince Edward at Windsor Castle in 1999. The couple had an informal, family ceremony for St. George’s Chapel and that reportedly meant following a more casual dress code than usual. However, there were a few royals who decided against Sophie’s choice.

While Prince Charles’ wedding to Princess Diana was considered a state occasion as he is the heir to the throne, Prince Edward and Sophie didn’t want any ceremonial state or military involvement.

Instead they opted for a more relaxed wedding.

As a result, Sophie is said to have requested the guests wear evening gowns and smart attire.

No hats or headpieces – which are normally customary – were required.

However, there were a couple of Royal Family members who chose to stick to tradition.

Princess Anne opted for a mint green satin dress and a matching short jacket for the occasion.

Towards the back of her updo was a bright green feather accessory.

The Queen, on the other hand, wore a lilac dress which was embellished with a lace overcoat and a matching lilac shawl around her shoulders.

As for her head piece, she chose a large matching feather fascinator.

The Queen Mother went one step further than her daughter and granddaughter.

Images from the day showed her in a pale blue dress with a bold purple hat with feathered detailing on her head.

It is thought the Queen Mother chose a hat because it was a staple items of clothing she was rarely seen without.

Everyone else, however, was hatless for the occasion.

In terms of what Sophie wore, she had chosen a beautiful silk organza dress made by Samantha Shaw.

It had long sleeves and a V-neck which had cut-glass and pearl beads sewn onto.

It was corseted at the waist and was full in length.

She paired it with a full-length veil made of sulk tulle and crystals which was held in place by a diamond tiara originally from the Queen’s private collection.

To complete the outfit, the Countess of Wessex added a black j and white pearl necklace, and matching drop earrings which were a wedding gift from Prince Edward.

As for shoes, Sophie opted for a three-inch heel court shoe made of silk crepe by Gina.