The Psychic Said She’d Never Get Married. (They Eloped.)

Jen Glantz, the founder of Bridesmaids for Hire, a company that farms out freelancers to complete bridal tasks that may or may not include zipping into a taffeta dress, had planned two weddings for herself in 2020.

The first event, to mark the fourth anniversary of the day she met her fiancé, Adam Kossoff, was supposed to be a March 19 elopement in Los Angeles. The second was a celebration for 170 on Oct. 17 in Boca Raton, Fla. Because of the coronavirus, one was changed, the other postponed. This was much to the disappointment of the couple and possibly the 100,000 online collaborators she recruited to help her plan the weddings through the website Finally the Bride, which she started in October 2019.

Ms. Glantz and Mr. Kossoff, both 32, had met in 2016 on the dating app Hinge a few weeks after a psychic at a Valentine’s Day singles mixer in Manhattan predicted her romantic life was doomed. “She said, ‘I’m reading your cards — you’re never going to find love,’” Ms. Glantz said.

For a while, the prediction had her worried. After Valentine’s Day, she hit the gas on her dating apps. “I went on 14 dates in one month and didn’t meet anyone I ever wanted to see again,” she said. “Then I saw one last message that was like, ‘Hey, you haven’t been responsive, I’d love to meet you if you’re interested.’”

When Mr. Kossoff, the vice president of marketing at Ghost Lifestyle, a sports nutrition company, walked into Irving Farm, the coffee shop near her Murray Hill apartment he had chosen for the date, she was captivated. 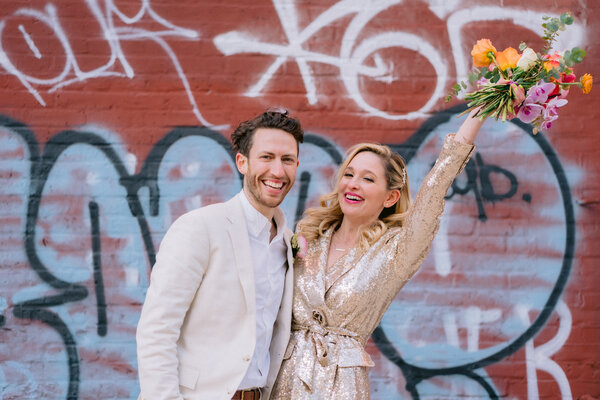 “It felt like a movie scene, where everyone was blurred out except this one person,” she said. Conversation over a flat white and a chai latte reinforced an attraction for both. “I can be surface-y when I first meet someone, but it was really easy for me to open up with Jen,” Mr. Kossoff said.

A month into dating, before they made their relationship official, Mr. Kossoff told Ms. Glantz he loved her. She was taken aback.

He didn’t. By the spring of 2016 they were an exclusive couple. In 2017, they sold most of their belongings and started living in Airbnb rentals throughout the country, in cities including Chicago and Los Angeles, for 30-day bursts.

“We wanted to have an adventure, and an adventure in getting to know each other in a different capacity constantly,” she said. The adventure, during which both worked remotely, lasted two years.

When they returned to New York in April 2019 and found a new apartment in Williamsburg, Brooklyn, Mr. Kossoff was ready to propose, and fairly certain that Ms. Glantz was ready to accept. But he had doubts. “For a while I was worried she might never want to get married,” he said.

Mr. Kossoff thought she might relish the trope about always being the bridesmaid, never the bride. On July 19, 2019, he set those suspicions aside. During a beach walk on a trip to visit her family in Boca Raton, he got on one knee and proposed. “I was so shocked and overwhelmed,” she said. She was also happy to say yes.

On March 19, Ms. Glantz and Mr. Kossoff eloped outside Irving Farm, the site of their first date. Mr. Kossoff’s brother Eric, a Universal Life minister, was the officiant; two friends attended as witnesses. Instead of leaving the suggestions of the Finally the Bride contributors to molder, she revived some for the ceremony.

Despite her openness to wedding suggestions, there are some ideas she has no problem dismissing. They include the one the psychic made about her never finding love. She’s glad she took the prediction seriously at the time, though.

“She lit a fire under me,” Ms. Glantz said. “And I’m the type of person who loves to prove people wrong.”