Home » Fashion » What Would Texas Be Without Buc-ee’s?

What Would Texas Be Without Buc-ee’s?

A convenience store chain is the through-line of America’s second-most sprawling state. 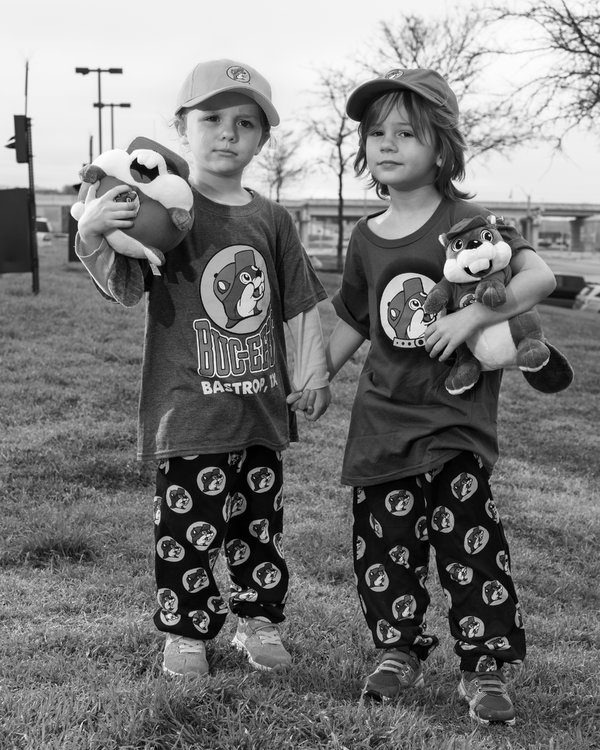 AUSTIN, Tex. — Ask any Texan and they’ll tell you: Buc-ee’s is no ordinary convenience store. Sure, it sells the usual gas, gum and candy. But most of its goods can’t be found in your average side-of-the-highway shop.

Beyond the foodstuffs, you can find camo-print neck pillows, sleeping bags, throw blankets, dove-hunting stools and aprons emblazoned with the mantra “Hunting is life.” There are accessories that show allegiance to the state’s college athletic teams, Texan home goods (cowhide rugs) and a hot-pink flask that says “Don’t mess with Texas women.”

Texans, or those just passing through, can commemorate Davy Crockett with a faux-coonskin cap, as well as mugs, shot glasses, flasks and playing cards emblazoned with his famous provocation: “You may all go to hell, and I will go to Texas.”

And, of course, there’s merch.

You can buy Buc-ee — a bucktoothed beaver in a red baseball hat — printed on a tent, an eraser set, a toothbrush and three styles of bikinis. There are Buc-ee soccer balls, softballs, Frisbees and footballs. And then there’s the plush, grinning Buc-ee, which comes in sizes small enough for a key ring and big enough to stand eye level with a toddler.

“Today, I just came in here for my grandson,” said Dan Bradshaw of Houston on a recent Saturday, wearing a green T-shirt that reads, “GRANDPA. THE MAN. THE MYTH. THE LEGEND.” His grandson Austin, 2, threw a foam Buc-ee’s football into the air nearby. “Other convenience stores just have small stuff. You go in there and you leave,” Mr. Bradshaw added. “Here, especially with grandkids, they have such a ball. You could spend an hour here. It goes by quick.”

When Arch “Beaver” Aplin opened the first Buc-ee’s convenience store, in Lake Jackson, Tex., in 1982, he did so with the hope that it would someday become a chain. By the time the store’s second location opened three years later, Mr. Aplin had partnered with Don Wasek. Together they expanded the chain gradually, opening 13 stores in its first 20 years, largely across the Gulf Coast.

Mr. Aplin had been frustrated by the quality of roadside restrooms when traveling with his young daughters. So, in 2003, the company opened the first Buc-ee’s travel center, a larger version of their convenience stores, where they offered barbecue, beaver-printed apparel and a commitment to clean toilets. (The bathrooms remain a point of pride: A team of custodians cleans the facilities around the clock at each location; billboards, visible from the highway, have read, “TOP TWO REASONS TO STOP AT BUC-EE’S: #1 AND #2,” “YOUR THRONE AWAITS,” and “ONLY 262 MILES TO BUC-EE’S. YOU CAN HOLD IT.”)

“It’s almost a sin to drive past Buc-ee’s on the highway,” said Shayla Garner of The Woodlands, Tex., who planned her route home specifically so she could restock her favorite snack: Buc-ee’s butter toffee peanuts. Balancing five bags of nuts, a brisket sandwich and a mini apple pie on one arm, Ms. Garner pulled her phone out of her purse. “I texted my sister, ‘hey, I’m stopping at Buc-ee’s, give me your list,’” she said, then grabbed two more bags of the sweetened nuts.

“Anytime anybody in our family drives this way, we have to stop,” said Ms. Garner, who regularly gives Buc-ee’s T-shirts and platters as gifts. “You go out with more than what you intended, but you’re never dissatisfied at Buc-ee’s,” she said.

They say everything’s bigger in Texas. Beyond the state’s cowboy hats and pickup trucks, the adage also applies to the Texan’s outsize conviction that this state is unequivocally superior. There’s an abundance of pride here in the state’s brief history as a nation, its superior way of life and, yes, its gas stations. Sure, there are other beloved regional convenience stores — some shoppers in the mid-Atlantic region swear fealty to Wawa, and ABC Stores has a strong fan base in Hawaii. Some franchise roadside refuel stations (Dunkin’ Donuts, Sheetz) or supermarkets (Wegmans, Piggly Wiggly) capitalize on a shared geographic identity. But there’s something different about Buc-ee’s.

“I thought it was like a super Wawa, but this is the size of about 22 Wawas,” said Jack Willard of Voorhees, N.J., during his first Buc-ee’s encounter, while visiting friends in Houston with his wife. “It’s not a convenience store at all — it’s like a department store, almost.”

The success of Buc-ee’s is built on two distinctly Texan features: its unmistakable character and its reliance on highways. In such a big state, the competing visions of what it means to be a Texan are separated by hundreds of miles. Yet all Texans identify with the open road. There’s the lived polyphony of Houston, a city known for its diversity and its sprawl, defined by the loop of Interstate 610. There’s the stark drama of Big Bend National Park, which contains an entire mountain range, a four-hour drive from the nearest commercial airport. There’s the quiet immensity of the state’s border with Mexico, which stretches for 1,254 miles along small-town roads from El Paso to South Padre Island. While their visions of the state differ, Texans see it from the same vantage point: through a car windshield.

This year, for the first time, Buc-ee’s hopes to expand its fandom to customers outside its home state. In January, the first store outside of Texas opened in Robertsdale, Ala.; the company plans to start building three stores in Florida this year. Early signs are promising. At the opening in Robertsdale, traffic backed up as lines of eager customers — from Alabama, from Louisiana, even some from Texas — waited to try the heralded Beaver Nuggets and sparkling restrooms. Buc-ee’s hopes to be the go-to stop not only for those driving across Texas, but across the Southeast — and beyond.

“Our owners have made it clear that as long as they’re still having fun building new stores, they’ll continue doing it,” said Jeff Nadalo, the general counsel for Buc-ee’s.

And they shouldn’t have trouble filling those stores with employees. Buc-ee's workers are guaranteed a $13-an-hour starting wage, and a benefit package that includes three weeks of paid vacation and 401(k) matching. But many join the staff for the love of the brand. Delia Gaona Villarreal, who chops brisket at the Temple, Tex., location, became a Buc-ee’s regular in high school, when she’d pick up an Icee on her way home from soccer tournaments. Cristina West, who primarily works at the fudge counter in the same shop, was first “blown away” by the convenience store when she visited it on her honeymoon.

“It’s a very warm feeling when you come in here — everybody greets you, and they’re sincere about it,” said Ms. West as she handed out samples of Beaver Buddies animal crackers. “It’s just your typical Texas thing. We love our state, we love our home and we want everybody to feel welcome here.”