Home » Lifestyle » Albanese given a glimpse of what he’s up against, now the fight is on

Albanese given a glimpse of what he’s up against, now the fight is on

Anthony Albanese lives for, in his words, fighting Tories. And now he’s about to embark on the biggest fight he’s taken on in his 25-year career.

In the past 48 hours Scott Morrison has shown his hand and revealed the ground on which he plans to fight Labor at the upcoming election as he seeks a fourth-term for the Coalition government. 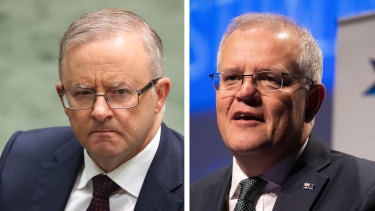 Anthony Albanese will have to counter scare campaigns if he is to beat Scott Morrison. Credit:Alex Ellinghausen/Paul Jeffers

The Prime Minister wants to frame his opposite number as a man who wants to tell you what to do. As someone who doesn’t trust Australians to do the right thing and wants to either bribe them or impose decisions on them.

As one Labor MP put it: They want to be party of hope against us, the party of nope.

It is of course a massive exaggeration to say Labor wants to force you to buy an electric car. Its policy at the last election was simply an aspirational target of 50 per cent new car sales by 2030. And even that policy is being reviewed. Truth is on current projections Australia will hit at least 30 per cent by then, and it’s quite possible that’s a conservative estimation.

But scare campaigns take hold if there is a sliver of truth or indeed an already underlying perception. And scare campaigns are what Albanese will need to counter if he is going to beat Morrison, who has proven to be a ruthless, cynical and disciplined campaigner. And he is again the underdog in this fight, trailing for months in published opinion polls.

Albanese’s response to Morrison’s claims that he wants to deny Australians a choice? “Nonsense”.

“There have never been mandates. There has never been any attempt by any government to take away a choice that private individuals would make,” he told reporters on Wednesday.

“There are two things you can do about the future. You can either shape it in the interest of people, or you can sit back and pretend it’s not happening and allow the future to shape you.”

Labor thinks it’s on to a winner with its efforts to tell voters Morrison cannot be trusted – either on his policies or his dealings with colleagues and foreign counterparts. They also want people to think he cannot be relied on when it matters.

Albanese has long been a darling of the membership, with a public profile of a larrikin who plays his politics hard but loves a craft beer and a laugh. His appeal in the marginal seats throughout the outer suburbs of Melbourne and Sydney is yet to be tested but Labor insiders are certain it is there.

If pushed they will tell you their chances of winning government are 50-50. But they are growing more confident by the day.

Morrison’s message is that after almost two years of a pandemic, Australians no longer want to be told what to do. There is little doubt it will resonate. This is just not a swipe about Labor’s past policies – real or made up – it’s a not-so-subtle nod to overbearing state premiers.

It is also a message to his own voters not to depart him for Clive Palmer’s party, which is again set to have a major influence on the next poll.

Albanese has been given an early glimpse at what he’s up against. He now just has to prove he’s up for the fight.