Ancient wisdom of the elders to help shape Victoria’s treaty

The ancient voices of Aboriginal elders, long swept aside by the turmoil that came with colonisation, are about to be restored to prominence in Victoria.

As the state moves towards establishing Australia’s first treaty with First Nations people, the most respected members of Indigenous communities from across Victoria are to be asked to advise on what should be included within such an agreement. 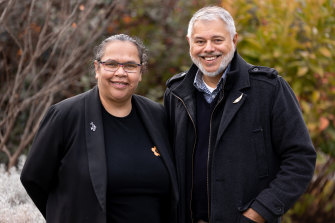 “We want the wisdom of the elders to help guide us,” says Charmaine Clarke, a Gunditjmara woman of south-west Victoria who, because she holds the status of an elder herself, is entitled to be called “aunty”.

“This is a listening exercise,” says Wurundjeri/Woi Wurrung elder Andrew Gardiner, of Dandenong, whose people grant him the title “uncle”.

“What the people from Mildura will want will be different to those from Mallacoota. There are so many differences right across the state.”

Aunty Charmaine and Uncle Andrew are the co-chairs of an interim Elders’ Voice to be announced on Wednesday.

Their job over the next three months is to consult elders across the state to establish a permanent Voice, and to ensure it reflects the wishes and the priorities of all Aboriginal elders across Victoria.

The permanent Voice will provide cultural and ethical advice, traditional wisdom, and oversight to the First Peoples’ Assembly of Victoria on its work negotiating a treaty framework with the state government.

“Our people do not live so long and there are not very substantial numbers of elders in Victoria, but this process will be open to all those who want to step forward,” said Aunty Charmaine, who has advised both state and federal agencies and Aboriginal communities in cultural resource management and in protecting ancient Aboriginal sites.

“They hold the wisdom and the experience. Our communities stand on their shoulders.

“I was speaking to an elder only a few days ago and he asked a very important question. ‘Is this treaty for the government, or is it for our own people?’

“The process looks bureaucratic because it is. We have to build a broad framework incorporating legal policy and political processes and all the rest.

“But the Elders’ Voice will remind us about the core values we are striving to place within the treaty, about reinstating our sovereignty and our connection to country. It will remind us of our cultural responsibilities.”

The whole undertaking would be underpinned by four cultural pillars – respect for such things as cultural authority; connectedness of communities, clans and future generations; a knowledge base, or wisdom; and lore of the land, or upholding cultural protocols.

“Our slogan is ‘when elders speak, we listen’,” Uncle Andrew said.

“This is a chance for Aboriginal people to talk, among other things, about taking advantage of local natural resources to create a sustainable economic future.

“We have an opportunity here to make our future better in many ways, through economic independence to improving educational and employment opportunities, through to the constant requirements of health, children, family services and so on.”

Within this, the Voice would represent the restoration of a cultural process that had survived for thousands of years.

Elders would be invited to gatherings across Victoria over three months, beginning in August, to discuss establishing a permanent Voice.

Aunty Charmaine said arrangements would be made for carers to accompany elders, if required, and members of the interim Voice would visit homes and hold discussions over kitchen tables if some elders could not travel. “We need all the voices,” she said.