Surprise! Jay Z and Beyonce attended the 2021 Grammys after earlier stating they wouldn’t be at the show. Queen Bey picked up some major awards while she was there!

Was that… Beyonce?? As H.E.R. got up to accept her award for Song of the Year at the 2021 Grammy Awards, the camera panned to the cheering audience celebrating her win. A couple sitting on the sidelines in sunglasses and black protective face masks caught everyone’s eye. Yes, that was Beyonce and Jay Z! 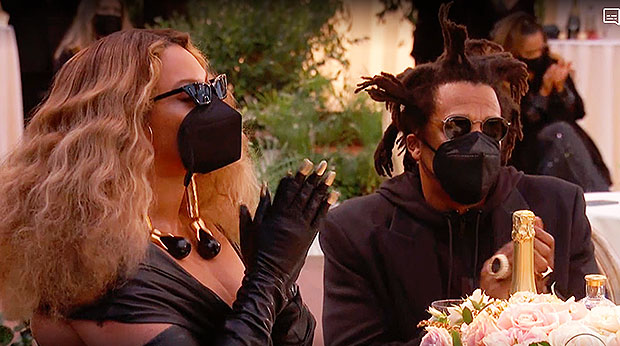 It was a shock to see Beyonce at the March 14 awards show because she had previously declined to perform during the event. Shortly after Beyonce was spotted clapping for H.E.R., her “Savage Remix” collaborator, Megan Thee Stallion, performed their song onstage — and crushed it. Later, Beyonce finally joined her onstage when they collected the Grammy for Best Rap Song!

Megan had slipped back into her amazing orange Dolce and Gabbana gown and cried as she stood side-by-side with Queen Bey. She thanked her profusely and told the audience that, when she was a kid, she vowed to become “the rap Beyonce.” After seeing Destiny’s Child in concert, Megan’s late mother always asked her, “What would Beyonce do?”

The love was mutual; Beyonce thanked Megan for letting her be part of her incredible song. She looked absolutely fabulous while she was at it, rocking a sleek pair of black pantyhose underneath a 1980’s style black mini dress. She kept her hair in bouncy curls and accessorized with drop earrings. She had a lot to celebrate at the 2021 show. Host Trevor Noah announced that she had tied for the most Grammy wins ever by a female artist (with Alison Krauss), and of any singer, male or female! Yes, Bey is the proud owner of 27 Grammys!

Another amazing achievement? Bey and Jay’s nine-year-old daughter, Blue Ivy Carter, won a Grammy for “Brown Skin Girl” in the Best Music Video category. Blue recorded vocals for the track off her mother’s The Lion King: The Gift album. Beyonce was nominated for a whopping seven more awards on Grammys night.