Call for disaster payments for workers hit by lockdown

Workers forced to stand down during pandemic lockdowns would receive a $3000 disaster recovery payment under a proposal from a key social services group to end a political impasse over federal help for those in need during restrictions in Victoria or other states.

The Australian Council of Social Service (ACOSS) wants eligibility for the federal payment to be expanded beyond victims of events such as fires and floods to include thousands of workers who lose paid work hours during shutdowns but do not qualify for unemployment benefits. 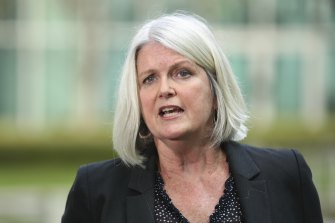 Its push to put the disaster recovery payment on the agenda at Friday’s national cabinet meeting comes as Treasurer Josh Frydenberg rebukes the Victorian government for asking the Commonwealth to match $250 million in state support for businesses affected by the latest lockdown.

Mr Frydenberg told the Coalition party room on Tuesday the Victorian government had engaged in a “desperate smear” against the federal government after its funding request was denied.

Business groups are also calling for a compromise to end the conflict between state and federal governments by giving workers some form of income support amid signs Victoria’s seven-day lockdown will be extended.

ACOSS wants its proposal debated at this week’s national cabinet meeting so Prime Minister Scott Morrison can strike a deal with state and territory leaders on how to deal with lockdowns.

Its chief executive, Cassandra Goldie, said the plan would ensure payments were fast-tracked to people who needed them.

“There’s no question that lockdowns, while necessary to protect health, have been disasters for people who’ve lost employment or paid work hours,” Dr Goldie said.

Victorian acting Premier James Merlino on Sunday described the Morrison government as “disgraceful” for deciding against providing additional financial support when it was responsible for programs such as wage subsidies.

Mr Frydenberg told a private meeting of Coalition MPs Victorians had received $45 billion in federal assistance during the pandemic so far compared to $13 billion from their state government.

“Victoria came to us and asked for assistance. Because it was a short lockdown it was at a scale that could be managed at a local level,” Mr Frydenberg told the meeting, according to a Coalition spokesman. “They ran a pretty desperate attempt to smear us when in reality the numbers tell a very different story. Victoria’s received more on a per capita basis than any other state.”

Labor treasury spokesman Jim Chalmers challenged the government in question time to deliver more help to Victorians, saying the state would not be locked down if it was not for the Morrison government’s failures on vaccines and quarantine.

“Why has this Treasurer refused to provide any additional support? What kind of Victorian abandons Victorians in their hour of need.”

Mr Frydenberg, the most senior Victorian in federal cabinet, responded that the government had provided more support to Victoria than any previous government.

Nick Munro, chief investment officer of Munro Partners, a Melbourne-based investment fund with $5 billion in assets under management, said the JobKeeper wage subsidy scheme had worked well and should be reinstated for hospitality companies and small businesses with casual employees.

“If you don’t support the hospitality businesses through lockdown they will go under in a matter of weeks not months. These are small businesses that are the lifeblood of the economy,” he said.

“Secondly, once they go under it takes years to turn them back on again not months … creating a longer-term economic malaise.

“Thirdly, staff who are not supported will leave the state first chance they get which creates bigger problems down the track.”

“Arguing between the federal and state governments is not in anyone’s interest and if this outbreak goes on for another week or two, the cracks are going to appear,” he said.

“This is not a handout, it is in everyone’s interest to get these guys to the other side of the bridge we used to talk about, but for some reason we have forgotten about them this time.”