Home » Lifestyle » Can you refuse to go back to work if your office doesn’t follow Covid-secure rules?

Can you refuse to go back to work if your office doesn’t follow Covid-secure rules?

WORKERS are being urged to get back to offices – but employers have to make sure it's safe for them to return first.

There are a number of rules employers must follow first, but what are your rights if you don't think they're being followed? 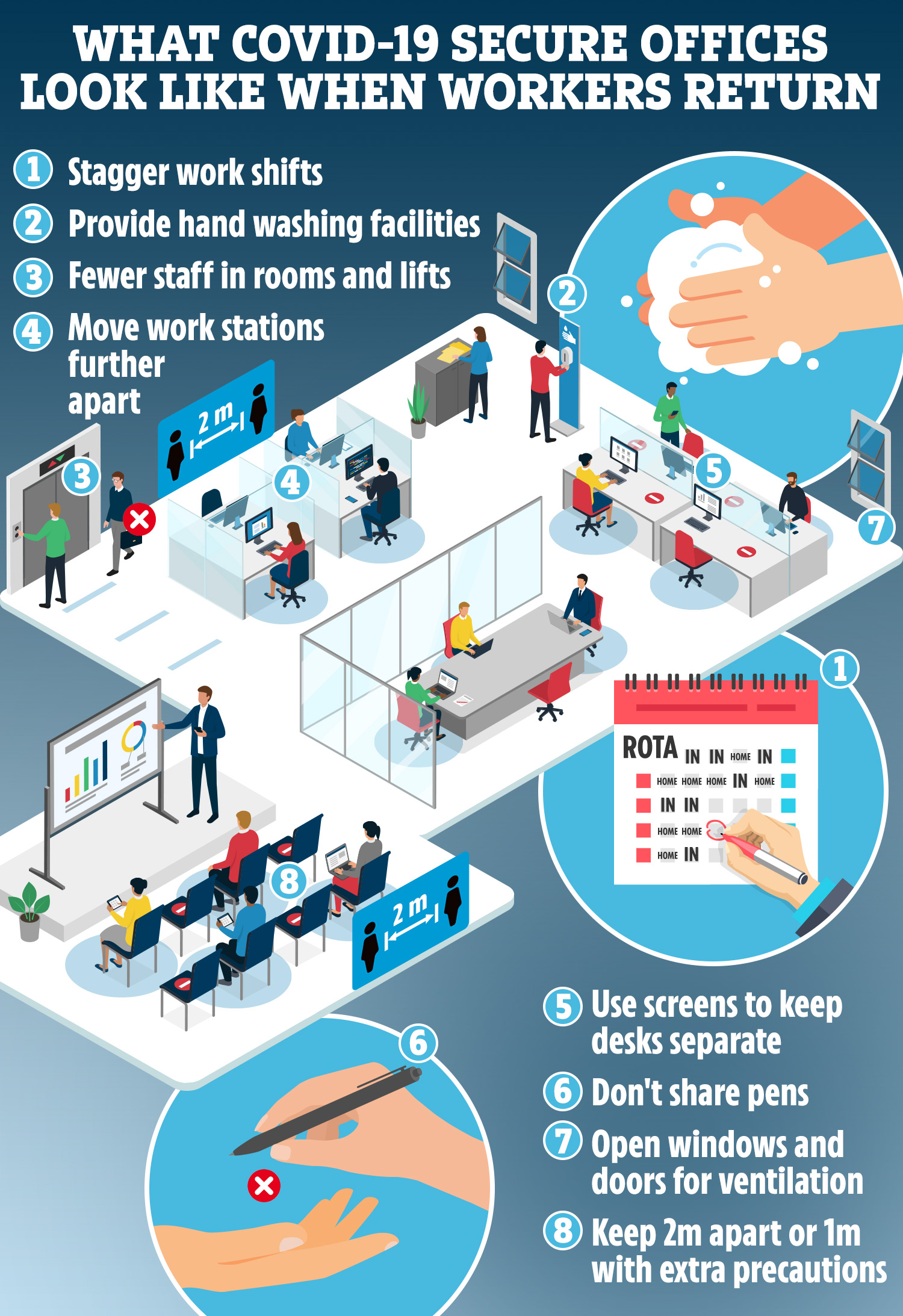 The government ditched the work from home slogan on August 1 but many employees are still working from home.

As children return to school next week, Boris Johnson is warning parents should do the same and get back to normality or risk losing their jobs.

The PM worries that empty offices will slow the country's progress and leave employees more vulnerable to being let go.

Whitehall bosses fear that millions of people staying at home will turning cities and town centres into ghost towns, and putting more jobs at cafes and bars at risk.

Today, Transport Secretary Grant Shapps insisted that it's safe for people to get back to their desks.

What rules do offices have to follow to make them safe?

In a reassuring move for employers, businesses are still required by law to ensure workers aren't being put at risk in unsafe environments.

Before opening again, offices have to undertake a health and safety risk assessment to make sure they're Covid secure.

Here are some of the rules employers have to follow to keep staff safe when they're at work:

1. Stagger working shifts to have fewer people in the office

While the government has said it's safe to use public transport, employers are being urged to consider staggering workers' shift patterns to avoid rush hour.

This will also help reduce the number of people in the office at the same time and reduce the risk of exposing workers to the virus.

The nation is being encouraged to pay particular attention to personal hygiene, as regular hand washing with anti-viral soaps has been proven to slow the spread of Covid-19.

Employers must make this possible, particularly for when staff enter and leave the building, such as putting hand sanitiser stations near the entry and exit points.

Can my boss sack me if I don’t got back to work?

IF you refuse to go back into work and you don’t have reasonable grounds for doing so, your employer can sack you.

But if you've worked for your employer for two years or more you may, however, have grounds to take your company to an employment tribunal if you think you've been unfairly dismissed.

Equally, if you think you've been dismissed because of discriminatory reasons, such as your age, race, gender or because of a disability, then you may have grounds for a discrimination claim.

It is automatically unfair to be dismissed because you took action about a health and safety issue.

It's worth pointing out that being dismissed is different to being made redundant. You can be sacked or made redundant even while on furlough.

See Citizens Advice or speak to your trade union representative for more information.

3. Fewer staff in the same room and lifts

Bosses shouldn't ask for meetings where a large number of workers are required to be in the same room for a period of time.

Offices should also take measures to make sure that workers aren't all cramming into the confined spaces of a lift to get to their desk.

Employers will need to make sure staff are able to social distance while carrying out their jobs, or one metre if extra precautions are being taken.

Work stations should be kept at least two metres apart to reduce the risk of spreading any illnesses.

Social distancing measures can be reduced to one metre apart if two metres isn't possible, as long as extra precautions are being carried out.

For example, perspex screens may be put up between desks or workstations could be positioned so employees are sat back to back.

Employers should provide workers' with their own equipment so they don't have to share with colleagues, including pens.

If you work somewhere that hot desks, your employer should make sure staff have access to all of the necessary products needed to clean down the computer between uses.

Offices should increase the ventilation in the building, such as by increasing the fan speed.

Windows and doors should be kept open where possible and ceiling and desk fans should also be used to improve the air circulation.

Can you refuse to go in if your work doesn't follow the rules?

Employers have the right to tell you where they'd like you to work, according to Citizens Advice, so you will need to return to the office if you're asked to.

If you don't think that your work place is following the guidelines, you should speak to your employer first.

You can discuss the measures you think the office should be taking to protect the workforce and consider how your boss can implement them.

Employees have the right not to be sacked for raising concerns about a health and safety issue, and can take it to a tribunal for unfair dismissal.

But your employer doesn't have to pay you if you refuse to work because of safety concerns as it is considered to be an unauthorised absence, according businesses specialists Nelsons Law.

Ultimately, the best thing to do is to be open and try and work something out with your employer.

What if I'm shielding or have childcare issues?

Shielding workers have been told that it's safe to return to the office since the start of August, if they can't do their job from home.

Citizens Advice says that if you were on the list and have been able to do all of your job from home, your employer shouldn't force you back into the office.

If you're in an area where there's a local lockdown, you may be asked to shield again.

The push to get back to the office comes as schools open again from next week, relieving childcare pressures on parents.

Parents are also now able to get 30 hours of free childcare and tax-free childcare until October even if their income has dropped.

If you are still struggling with childcare you should talk to your employer to try and come up with a solution that suits both of you, such as changing your work hours.

Alternatively, you could ask to take unpaid parental leave until you have sorted out childcare.

Here, we explain ways to cut the cost of childcare – from discounts to community nurseries.

END_OF_DOCUMENT_TOKEN_TO_BE_REPLACED

END_OF_DOCUMENT_TOKEN_TO_BE_REPLACED
Recent Posts
We and our partners use cookies on this site to improve our service, perform analytics, personalize advertising, measure advertising performance, and remember website preferences.Ok