Rishi Sunak’s rapid rise to become the first British Asian Prime Minister is a reminder that ours is one of the most open and inclusive societies on Earth.

Under Conservative governments, we have been led by the first three female prime ministers. They have appointed the first non-white chancellors, and foreign and home secretaries, along with many other senior posts.

This model of diversity should be a source of pride for Conservatives, of course, but also for black and Asian communities — and, indeed, the whole country.

Not for the Labour Party, though, where the politics of envy still reign supreme — as this week’s attacks on the new Prime Minister, sneeringly labelled ‘Rishi Rich’, demonstrate only too vividly. In this case, the envy is rendered even more toxic by blatant racism. 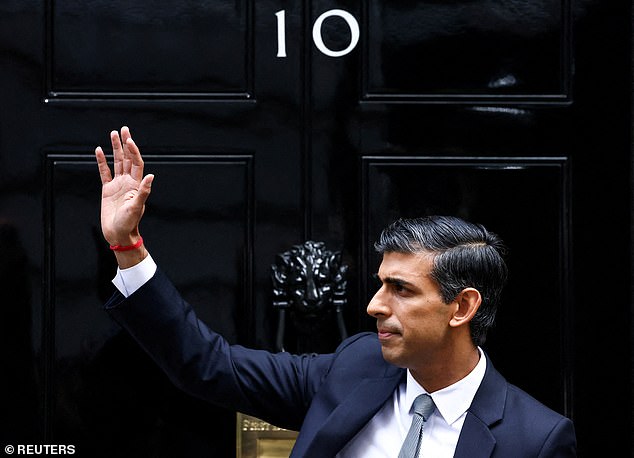 The Left misses no opportunity to encourage racial divisions. No sooner had Mr Sunak been elected than Nadia Whittome, the Labour MP for Nottingham East, tweeted: ‘Rishi Sunak as Prime Minister isn’t a win for Asian representation.’

As a ‘multi-millionaire’, he was written off by Miss Whittome before he had even set foot in No 10. ‘Black, white or Asian: if you work for a living, he is not on your side.’

Just think about that for a moment. According to Miss Whittome, just because Mr Sunak happens to have been highly successful in business before entering politics, his incredible achievement in becoming the first British Asian to hold his great office does not count.

No matter that Rishi’s success owes everything to hard graft and aspiration — Nadia Whittome clearly considers those admirable qualities a sin.

As the Mail reported yesterday, Rishi’s family hardly comes from a privileged background: his grandmother grew up in a remote hut in Tanzania.

But so determined to better her opportunities was she, that she sold her wedding jewellery to fund a one-way air ticket to Britain to find work. Within a year she had earned enough to bring the rest of her family over, including Rishi’s mother, Usha.

Usha worked hard at school and studied pharmacy at Aston University, where she met Rishi’s father, Yashvir, who had come to Britain from Kenya and was studying medicine. 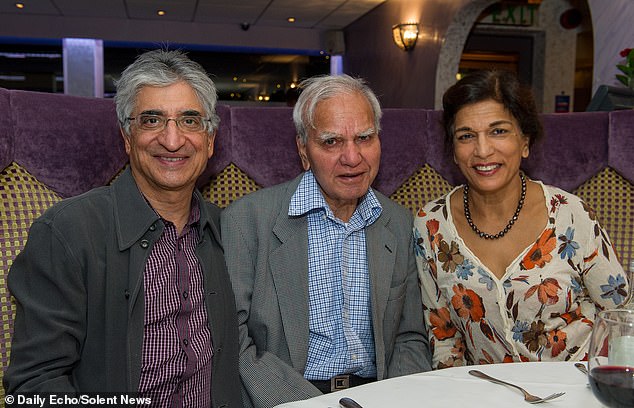 Rishi’s mother Usha (right) worked hard at school and studied pharmacy at Aston University, where she met his father, Yashvir (left), who had come to Britain from Kenya and was studying medicine

The story of the Sunaks is a classic one of hard-working, middle-class immigrants: they moved to Southampton, where Yashvir was a GP, while Usha ran a pharmacy.

They scrimped and saved to put Rishi through Winchester College, where fees are now £43,000 a year. He was mortified that he failed to get a scholarship, which would have meant reduced fees.

The point is that, just like countless parents, they made huge sacrifices for their son. He later said he didn’t realise how much of a struggle it was for them: ‘Everything was about providing this great education for their kids.’

He credits them with imbuing in him a ferocious work ethic that led to Oxford and then Stanford University in California, where he studied for an MBA and met his wife Akshata Murty, the daughter of an Indian billionaire — who also, incidentally, started with nothing.

Surely Rishi Sunak’s education and career path is a model to be admired, rather than sneered at. From university, he went on to join the investment bank Goldman Sachs. And, yes, began to make a lot of money in his own right.

In the eyes of Miss Whittome and others on the Left, that is to be held against him.

But why on Earth should it be denigrated? What point exactly, are these critics on the Left trying to make? Are they saying that hard work and aspiration of the kind so impressively displayed by the Sunaks is a terrible idea?

Whatever the case, to imply that there is no room at the top for those who start at the bottom is a peculiarly vile prejudice.

And since so many on the Left hold this position, it begs another important question. How would Sir Keir Starmer’s Labour regard the kind of success epitomised by the Sunaks should he end up in No 10? 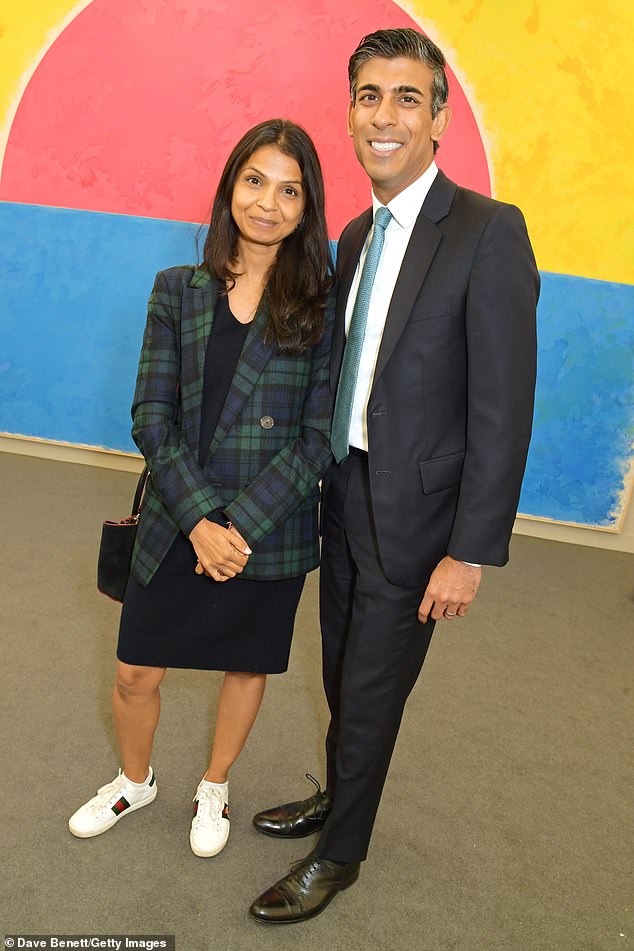 He credits his parents with imbuing in him a ferocious work ethic that led to Oxford and then Stanford University in California, where he studied for an MBA and met his wife Akshata Murty (pictured), the daughter of an Indian billionaire — who also, incidentally, started with nothing.

Would they begin to undermine the strivers? There is the great danger that the unsavoury politics of envy so readily on show this week could seep into government policy.

Nadia Whittome is not the only Labour MP, after all, to demonstrate her prejudice against aspirational people from ethnic minorities. Just a few weeks ago, Rupa Huq, then Labour MP for Ealing, said that the then Chancellor, Kwasi Kwarteng, was only ‘superficially . . . a black man’.

‘If you hear [Mr Kwarteng] on the Today Programme,’ Miss Huq told an audience at the Labour Party conference, ‘you wouldn’t know he is black.’

For these shockingly racist remarks, Rupa Huq was suspended from the Parliamentary Labour Party by Starmer — and rightly so. She has since apologised.

With typical generosity, Mr Kwarteng — who has Ghanaian heritage and, like Mr Sunak, has been both academically and commercially successful — chose to dismiss this scurrilous attack.

Yet such attitudes are all too common in the Labour Party and elsewhere on Left, where middle-class aspiration is the unforgivable sin — a sin horribly compounded, it seems, if your origins are in an ethnic minority and you happen to be a Conservative.

One of the brightest rising stars on the centre Right is Kemi Badenoch, the International Trade Secretary. Her story, like Rishi Sunak’s, is an inspiring one.

Born in Britain, Kemi spent her childhood in Nigeria, where she silenced boys who made disparaging comments about girls by citing the example of Margaret Thatcher. 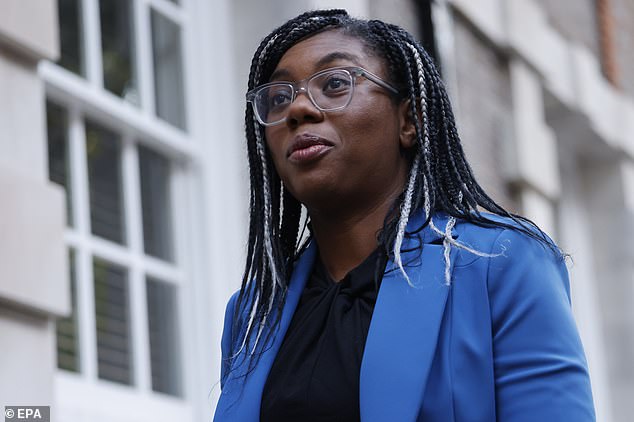 One of the brightest rising stars on the centre Right is Kemi Badenoch (pictured). Her story, like Rishi Sunak’s, is an inspiring one.

Aged 16, she came here to live with relatives. She paid her own way through school and college, learning to be self-sufficient and to earn a living.

She joined the Conservatives aged 25, entered Parliament as MP for Saffron Walden — and has been repeatedly denounced ever since because she has consistently refused to adhere to the Left’s doctrine about race and aspiration.

‘They profess to be pro-women and pro-ethnic minorities, but if you don’t sign up to their cause, they’ll hate you even more than they do privileged white males,’ she said.

As a minister, Mrs Badenoch fiercely defended a government-commissioned report on racial disparities by Dr Tony Sewell that concluded that Britain’s multiracial society was, in fact, a model to the world.

For questioning Left-wing assumptions about ‘institutional racism’, Dr Sewell found himself subjected to a torrent of abuse.

The Labour MP Clive Lewis tweeted a picture of the Ku Klux Klan, while Dr Sewell’s academic credentials were questioned by Professor Priyamvada Gopal of Cambridge University. Having been corrected over them, she replied: ‘Even Dr Goebbels [the Nazi propaganda minister] had a research PhD.’

These attacks on Rishi Sunak are part of the same ugly history that, over the years, has seen countless public figures denounced and derided in the most despicable manner.

Who could forget the disgraceful reaction of the Left to the death in 2013 of Margaret Thatcher, one of the greatest prime ministers in our history?

On social media the Judy Garland song ‘Ding Dong! The Witch Is Dead’ went viral. Dave Hopper, general secretary of the Durham Miners’ Association, declared: ‘It’s a great day . . . she did more damage to us than Hitler did.’

The one consolation in this ugly story is that the negative personal campaign against Britain’s first Asian Prime Minister will almost certainly backfire. For voters will once again be reminded that Labour really is the ‘nasty party’.