DFAT warns ambassador after police report a failure to self-isolate

A diplomat returning from overseas breached Australia's mandatory requirement to self-isolate, prompting a senior government official to warn the "relevant ambassador" of the "seriousness" of the matter.

The Australian Federal Police advised the Department of Foreign Affairs and Trade that the diplomat had not abided by the 14-day self isolation requirements on March 18. 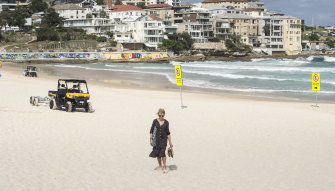 Bondi Beach has been empty since the beach was closed because of crowds violating rules to stay apart. Credit:Steven Siewert

DFAT's head of protocol Kate Logan raised the matter immediately with the country's ambassador in Australia.

"I have spoken to the relevant ambassador and underlined the seriousness with which the Australian government and community regard this matter, " Ms Logan wrote. "I have asked the ambassador to keep me informed of the action being taken to ensure there is no repeat of the breach."

The diplomat's name has not been made public, nor has the country he represents.

On Thursday night, NSW Police said officers had issued the first infringements for violations of the Public Health Act. A 65-year-old woman from the Lake Macquarie area, who returned from Bali on March 25, who allegedly failed to follow orders to quarantine for 14 days was fined $1000. Police allege she breached quarantine twice.

The Minister for Police and Emergency Services, David Elliott, said on Thursday night that the rules could not be clearer and they apply to everyone.

“No one is above the law. If you decide to ignore a direction, you will be caught, and you may very well find yourself slapped with a hefty fine,” the minister said.

Ms Logan wrote that she knew the "overwhelming majority" of diplomats and consular staff were following the government's advice closely and responsibly.

Get our Coronavirus Update newsletter for the day’s crucial developments at a glance, the numbers you need to know and what our readers are saying. Sign up to The Sydney Morning Herald’s newsletter here and The Age’s here.

The letter was also circulated to international organisations, whose employees in Australia may also hold some immunity from prosecution.

A spokesperson for the department confirmed on Thursday that the Australian government had informed diplomatic missions of the need to follow Australian laws and requirements to contain the spread of COVID-19, including the mandatory 14-day self-isolation for those arriving from overseas.

Not all diplomatic staff receive immunity from offences under Australian laws. Senior staff, like ambassadors, may receive greater immunity from prosecution than more junior staff.

DFAT did not respond to questions about whether any other breaches had occurred by diplomats or their families.

END_OF_DOCUMENT_TOKEN_TO_BE_REPLACED

END_OF_DOCUMENT_TOKEN_TO_BE_REPLACED
Recent Posts
We and our partners use cookies on this site to improve our service, perform analytics, personalize advertising, measure advertising performance, and remember website preferences.Ok