DOMINO'S is launching its first ever vegan pizza range in the UK – and it includes several old favourites. 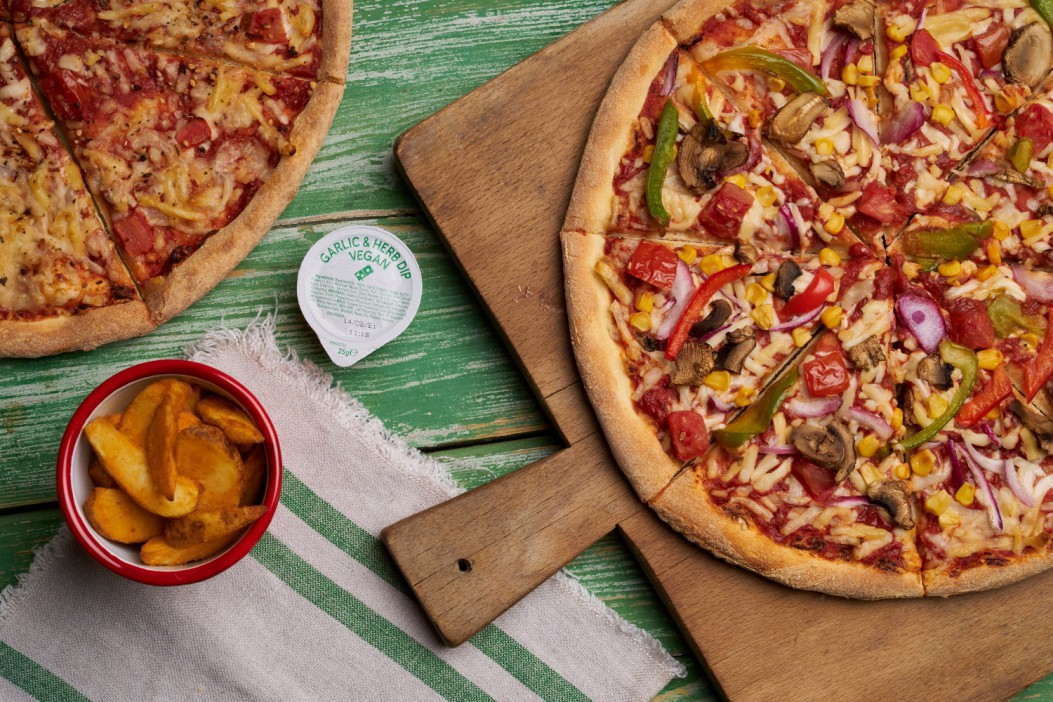 But now the pizza delivery chain is rolling out the vegan options to all 1,200 of its branches across the UK from today.

The two options are Vegan Margherita and Vegan Vegi Supreme – and the vegetarian versions will still be available too for those who don't eat meat but who do consumer dairy products.

The Vegan Margherita is made using vine-ripened tomato sauce, Domino’s own vegan cheese alternative and is topped with diced tomatoes and herbs.

The vegan cheese has been made with coconut milk, to give it a creamy and cheese-like consistency, while dried yeast brings the cheesy flavour.

But Domino's has told The Sun the vegan pizza base is different and contains no milk.

For dip fans, vegans can also now get their own version of the classic garlic and herb sauce.

The normal garlic and herb dip contains both egg and milk products, which means it is unsuitable for vegans.

But Domino's says a new version, without those ingredients, has been added to the menu.

The new garlic and herb dip contains ingredients, such as pea protein, to give it a similar flavour and consistency but to make it vegan.

Its barbecue and Frank's Red Hot sauces are already vegan.

The pizzas only come in an 11.5 inch (medium) size, which is eight slices, and prices for the Vegan Margherita start from £13.99, while the Vegan Vegi Supreme starts from £16.99 as they are different regionally.

Each pizza is the same price as its veggie equivalent in a medium size.

The vegan dip costs 49p and one pot serves two people, meaning that it is 116 calories per serving.

The non-vegan garlic and herb dip also costs 49p and has 169 calories per serving.

Melanie Howe, a spokeswoman at Domino’s, said: “Domino's may not be the first, but following fantastic feedback from our recent trial, we're confident our [pizza] tastes the best.

"Our pizza chefs have been tucked away in test kitchens perfecting the recipe to ensure our vegan friendly range recreates the unique magic of Domino's famous original dough.

"Of course, nothing says Domino’s like our Garlic and Herb dip, so we're proud to have perfected a worthy equivalent of the legendary pot so our vegan fans can also dunk or drizzle to their hearts’ content."

If you want to order your pizza, you need to visit Domino's website and put in your postcode to find your nearest branch.

Pizza Express has revealed it is closing 73 restaurants, which means 1,100 jobs are at risk.

Several pizza chains are also continuing to run a discount this month after the chancellor's Eat Out to Help Out scheme ended on August 31.

Dominos was also previously giving pizza fans £30 worth of Domino’s for £15 under its own version of the scheme.

END_OF_DOCUMENT_TOKEN_TO_BE_REPLACED

END_OF_DOCUMENT_TOKEN_TO_BE_REPLACED
Recent Posts
We and our partners use cookies on this site to improve our service, perform analytics, personalize advertising, measure advertising performance, and remember website preferences.Ok