Home » Lifestyle » ‘Every hand will be needed at the wheel’: John Anderson in bid to return to Parliament

‘Every hand will be needed at the wheel’: John Anderson in bid to return to Parliament

Former deputy prime minister John Anderson will be the only remaining member of John Howard’s ministry in Federal Parliament should he realise his ambition of returning to politics as a senator.

Mr Anderson, 64, announced on Monday he would seek The Nationals’ preselection for a NSW Senate spot at the next election, but said he had no ambition to return to the leadership or even the ministry. 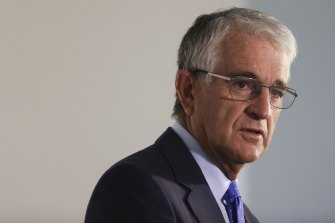 Former deputy prime minister John Anderson has made clear for months he is worried Australia’s future is on the lineCredit:Alex Ellinghausen

Instead, he said, he wanted to offer from the backbench his accumulated life experiences, his long period in politics, and the knowledge gained from speaking to scores of what he calls “world’s great thinkers” – mostly conservatives – on his recent podcast and video series, “Conversations with John Anderson”.

He has made clear for months he is worried Australia’s future is on the line. He sees it as burdened with a mountain of debt – inter-generational theft, he has called it – and poisoned by “identity politics”.

“This is not something I’ve undertaken lightly,” he said. “I am less than sanguine about Australia’s future.

“I believe every hand will be needed at the wheel as we confront this period of super-charged state-ism and big spending with no clear plan about how we are going to pay for it.”

However, Mr Anderson’s bid to return to Parliament after retiring in late 2007 has inspired muted criticism from some MPs within his party who believe younger aspirants – or a woman – should be given the chance ahead of a man who has already had his turn at politics.

Mr Anderson responded that his long experience as an MP, a minister, leader of The Nationals and deputy prime minister to Mr Howard from 1999 to 2005 meant he could serve the party and those aspiring to politics as “an encourager and mentor”.

The current leader of the Nationals, Michael McCormack, made clear he welcomed Mr Anderson’s bid for the Senate.

“Whilst pre-selection matters are rightly a matter for grassroots members of The National Party to determine, I am buoyed by John Anderson’s announcement that he will seek nomination for the NSW Senate ticket,” Mr McCormack said.

“This is not something I’ve undertaken lightly. I am less than sanguine about Australia’s future.”

“Attracting the calibre of a candidate such as John Anderson demonstrates why, in our 101st year, The Nationals continue to be the party for regional, rural and remote Australians.

“John Anderson was one of our nation’s finest deputy prime ministers and his continued confidence in the ability of The Nationals to deliver for our regional communities is a vote of confidence in our party’s future.”

Former Nationals leader Barnaby Joyce, who himself has been agitating for a change of direction, placing Mr McCormack’s position under strain, said Mr Anderson was obviously a strong candidate who had given years of service to the party.

The only member of Mr Howard’s various ministries remaining in Parliament is backbencher Kevin Andrews, who has lost preselection for his Victorian seat of Menzies and will retire at the next election.