Home » Fears for school students left to their own devices

Fears for school students left to their own devices

Four in five schoolchildren own at least one digital device – some from as young as four years old – and almost a third are allowed to take them to bed every night.

Parents say they find their children’s digital habits harder to govern once they own a device, and two-thirds of those studied said that trying to negotiate this usage led to conflict, the study by the Gonski Institute for Education at the University of NSW found. 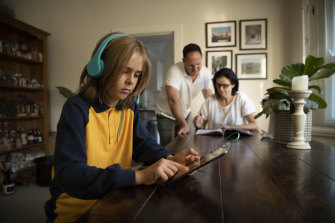 Dean and Kylie Banks have adopted a rigid approach allowing their son Archie, 9, half an hour of screen time a day.Credit:Wolter Peeters

“The other finding that was really surprising to us is the very high rate of parents who admit that they are distracted themselves [at 90 per cent],” said Professor Pasi Sahlberg, the institute’s deputy director and the report’s co-author.

“It raises a question about how distracted parents, and teachers, can see or help these kids as they should be helped. When we are considering things to do to help our children grow up healthier and happier and safe, we are all in this together.”

The Gonski Institute has joined a three-part international study, Growing Up Digital, initiated by the Harvard Medical School. For the second phase, on which the report released on Tuesday is based, it canvassed the views of 2500 Australian parents and grandparents.

The next phase will examine views of the children, aged 5 to 17. Professor Sahlberg hopes the project will provide baseline data against which future surveys can be compared, to map changes in attitudes towards technology.

Professor Sahlberg said the first two phases of the study showed parents and teachers were equally worried that children were “negatively distracted” by digital technologies. Parents mostly gave screens to children for entertainment rather than educational purposes.

The report also found students from lower socioeconomic backgrounds were more likely to take their phones to bed, and less likely to have effective parental role modelling.

“Without being alarmist, we cannot sit back and be content to watch an entire generation of young people be put at risk by unregulated access to digital tools that they don’t know how to manage,” the report said.

However, Jocelyn Brewer, a psychologist who specialises in helping teens navigate the digital world, said the study’s sample size was small and not representative of the population.

“We can survey everyone every year, but we don’t have a plan for how we use this information to come up with the solutions that parents need,” she said. “More statistics that freak you into doing nothing isn’t very helpful.”

Ms Brewer said surveys could not address the wider context of the issue. For example, the rise in devices coincides with social changes such as more families living in apartments and the pressure for employees to be ‘always on’.

Nor could surveys address the nuances, such as exactly what children were doing with their devices at bedtime, and at what age; some might be chatting on social media, but others might be listening to audiobooks or using sleep apps.

“It’s not a surprise parents find it hard to control devices because they have never had to consider what that looks like,” she said. “Digital parenting requires you to be a neuroscientist, a psychologist, IT helpdesk, classification board reviewer and disciplinarian.

Kylie and Dean Banks have found a strict approach to screen time works best for their 9-year-old son Archie. He’s allowed to watch TV or use an iPad half an hour a day while dinner is being made, and they create a roster of what he can watch; Mondays might be Netflix, and Tuesday iPad games.

“We definitely try and regulate it because we’ve found with Archie he can easily become addicted to it,” Mrs Banks said. “Technology is like cocaine for kids. Our experience is if it’s unmanaged then they’re like an addict looking for their next hit.

“The key we’ve found is holding to those boundaries.“