Home » Lifestyle » From the Archives, 1963: A Concert Hall for Melbourne’s Arts Centre

From the Archives, 1963: A Concert Hall for Melbourne’s Arts Centre 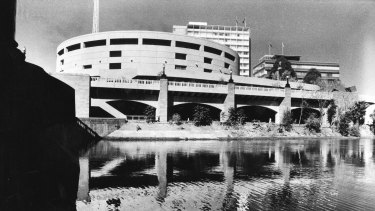 A SYMPHONY HALL to seat 2500 people may be included in Victoria’s new Cultural Centre.

The centre’s architect, Mr. Roy Grounds, said yesterday that the hall would cost at least £1,250,000 and be in addition to the three theatres already announced.

The A.B.C. and the Victorian Symphony Orchestra were most anxious to have the hall, which was outside the allotted task of the building committee. Mr. Grounds said he could not disclose the exact location of the hall, but it would be in the spire area.

The hall would not make an additional “knob or bulge” on the centre.

It is believed the hall will be built underground as will the other theatres. 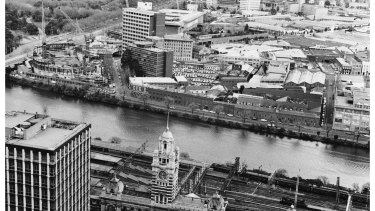 Aerial view of the Southbank and the Concert Hall under construction, 1979.Credit:The Age Archives

The other theatres will include a general auditorium with accommodation for 1000 people for lectures, entertainment, Art Gallery Society activities and chamber music; an experimental theatre for 400 people, and a theatre for 1200 people.

Mr. Rogers said finance for necessary foundation work to allow for the symphony hall had been approved by the State Government.

Deadline Next Year for Hall Decision

A final decision on proposals for a concert hall at the Cultural Centre would have to be made by the end of next year, the chief executive officer of the building committee (Mr. V. D. Rogers) said yesterday.

Work on the centre was proceeding according to schedule and so far had been kept within budget estimates.

This section of four floors plus a basement which would be occupied by a car park accommodating 1100 cars should be completed by the end of 1966 and ready for the public by mid-1967.

The remainder of the centre, including the spire, meeting rooms, and the stage tower, the theatres, and an art school to take 80 graduate students should be completed by 1970 at an additional cost of £2,250,000.

Mr. Rogers said the committee had not yet received authority, nor had finance been approved, to complete the art school and the north end (spire and theatres) but it had been informed that continuity of construction would be maintained.

An additional £420,000 was required to complete the car park, which would probably be leased.

Mr. Rogers said the committee hoped to have an underpass from Alexandra Avenue under St. Kilda Road to the main foyer and car park. This was included in the Metropolitan Board’s planning.

The committee had listed 40 items throughout the Cultural Centre which could be endowed by members of the public. Donations were still coming in and the committee hoped these would continue.

Mr. Rogers said the committee had received more than 150 suggestions for a name for the project.

“The committee feels it should not be named after one man,” he added. “I feel Cultural Centre will probably stick.”

The director of the Art Gallery (Mr. Eric Westbrook) said every child in the State would be reached through the extra facilities provided by the new centre.