Home » Lifestyle » From the Archives, 1982: Inside Humphrey B. Bear

From the Archives, 1982: Inside Humphrey B. Bear

Inside Humphrey B. Bear

ADULTS intent on clinging to childhood heroes, be they Britain’s Winnie the Pooh and Christopher Robin, America’s Mickey Mouse or Australia’s own Snugglepot and friend, must realise that a new idol has entered the toddlers’ pantheon. 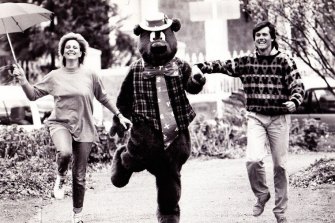 Humphrey B. Bear is watched by more than one million little Australians each week, and in the interests of explaining the phenomenon, we felt it about time parents knew what sort of man, or men, stumble around inside Humphrey. The explanation is difficult, as some adults are convinced that Humphrey is indeed Humphrey.

Neil Smith, the executive producer of children’s programmes at NWS-9 in Adelaide refused us permission to speak to the inner Humphrey because of the need to preserve, ‘the reality of Humphrey”. The television station produces ‘Here’s Humphrey’ and occasionally we have spied the bear prancing around the continent at shopping centres and church fêtes. But, Rob Carless, the coordinator of Humphrey Bear Enterprises, is loath to admit that Humphrey clones exist. “There is only one Humphrey,” he says. “And he is a very busy bear, what with having to appear all over the country.”

Humphrey is a fairly profitable bear, making his money through network deals and sales to country television stations and licensing deals negotiated by keepers at HBE. Humphrey charges $370 for a 30-minute spot at neighbourhood shopping centres, and Humphrey products include T-shirts, sweets, biscuits, adventure playground equipment and a range of dolls costing up to $120.

Graeme Dowd and Peter Faux, freelance dancers and choreographers, play inside Humphrey. Bear skins in Melbourne, and both are dedicated to their job. “Humphrey is very important to a lot of children,” Mr Faux says. . He shows toddlers how to do exercises, obey parents and eat their vegetables.

Humphrey is not exactly a hyperactive bear, limiting his repertoire to rubbing his tummy and shaking his head. According to the insiders, a great deal of skill is required to operate the large awkward costume. “I can see through the mouth,” Mr Dowd tells us. “But, of course, I have to keep it closed, otherwise the kids can see in.”

The men inside say that in a decade of performing, the audiences have changed over the years. “Children used to get all excited at just seeing Humphrey, but now he’s expected to do triple flips and balancing acts,” Mr Dowd says. “Everything has to be bigger, better and brighter.”

Mr Faux favours rural children, saying that they have more imagination because they watch less television. “When you take a show to the country, you don’t have to give it that razzmatazz presentation that you do in the city. They travel hundreds of miles to see Humphrey and say `please’ and `thank you’. City kids just say `gimme’.”

Humphrey does have his problems. The men inside can re-member the frightful moment when Humphrey’s braces broke and his trousers were in danger of falling off during a performance and then there was the accident in Ararat when the bear fell off the back of a truck.

There are other times. Doctors told the performers of a boy dying of leukaemia in Warrnambool who hung on for days waiting for Humphrey’s visit. He died the day after seeing the bear and was buried with his Humphrey doll.