The State Government last night refused to meet the ransom demands of a group claiming to have stolen the National Gallery of Victoria’s most valuable painting, a $A1.6 million Picasso. 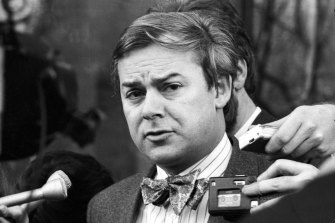 The theft of ‘Weeping Woman’ was discovered yesterday. A group calling itself the Australian Cultural Terrorists claimed responsibility for the theft, and said in a ransom note that the painting would be destroyed if the group’s demands were not met in seven days.

Police and gallery officials were uncertain last night whether the painting had left the gallery and said a thorough search of the building would be completed this morning.

The thieves, who left their typewritten calling card on the gallery space once occupied by the painting, have demanded that the Minister for the Arts, Mr Mathews, increase arts funding by 10 per cent in real terms over three years and establish a $25,000 annual art prize called the Picasso Ransom. 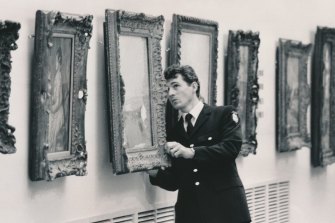 Constable Steve Wilson, one of 25 policemen who searched the National Gallery of Victoria for the missing Picasso.Credit:Bruce Postle

Mr Mathews’ response last night was: “Budgeting by blackmail is just not on.” A reward had not been considered, he said.

“The people who were responsible for this outrage were obviously very familiar with the internal procedures of the gallery and were able to pass off what they had done in circumstances that minimised the chances of detection,” he said.

The gallery’s director, Mr Patrick McCaughey, said he did not believe gallery security was lax in any way.

He was unaware of the theft until late yesterday morning. He said the theft had been discovered during a routine check.

However, when contacted by ‘The Age’ at 11.30 yesterday morning, his office staff said they did not know about the theft and Mr McCaughey had said he was treating it as a hoax until early afternoon.

The 55-centimetre by 46-centimetre painting was removed from its space in the second-floor European Gallery by a special security screwdriver not readily available in hardware shops and which Mr McCaughey said only a skilled person could use. The painting had been removed from its frame, which later was found “nearby” in the gallery.

Mr Mathews said an attendant supervising the area where the painting had been hung had been interviewed and clearly recollected it being in place when the gallery closed on Saturday afternoon.

Police confirmed last night that a gallery staff member noticed the painting was missing some time on Sunday but had not been suspicious because he saw a location card.

An immediate security review has been ordered by Mr Mathews, who said that it was “mind-boggling” that such a valuable work could be stolen, apparently so easily.

Mr Mathews said he did not know whether attendants would have been told the painting was to be removed for cleaning or restoration. That was something which would be investigated as part of the security review he had ordered.

At a 4.30 pm news conference outside the gallery — the media were not allowed inside — Mr McCaughey said he was “horrified and stunned” by the theft.

A related painting by Picasso was offered for sale for $6 million in New York this year.

It is believed the ‘Weeping Woman’, painted in 1937, was not insured, although Mr McCaughey would not confirm or deny this.

“I would say the demands which are being made are out of all proportion to the value and importance of this particular painting,” Mr McCaughey said. “If the picture is damaged or ruined in any way, then this gallery will never be able to afford another Picasso painting.”

Mr Mathews said he was appalled that one of the finest and most valuable paintings in the gallery could be stolen “with the justification offered that the theft is in the interests of art”.

“I can’t believe that anyone who genuinely has at heart the interests of art or art lovers could have perpetrated an action of this sort.”

Interpol and police in other states had been alerted about the theft. He believed the painting could not be sold “because they don’t make Picassos any more”.

Mr Mathews said he hoped those who stole the painting would not damage or destroy it.