Hairdresser who thought weightloss was stress discovers it's cancer

A hairdresser who thought her weight loss and period troubles was stress was devastated to discover it was in fact a rare ovarian cancer.

Sarah Burns, from Knutsford, was diagnosed with Mucinous Ovarian Cancer (MOC) in August 2020 aged just 25, after she began experiencing symptoms in December 2019.

Sarah told how she started bleeding between her periods while her cycle also became shorter and she began to lose weight, all of which she put down to stress.

However, she trusted her gut which was ‘telling her to go to the doctors’.

‘The doctor ran a full set of bloods and arranged an ultrasound ‘just in case its cancer”,’ she told CheshireLive. 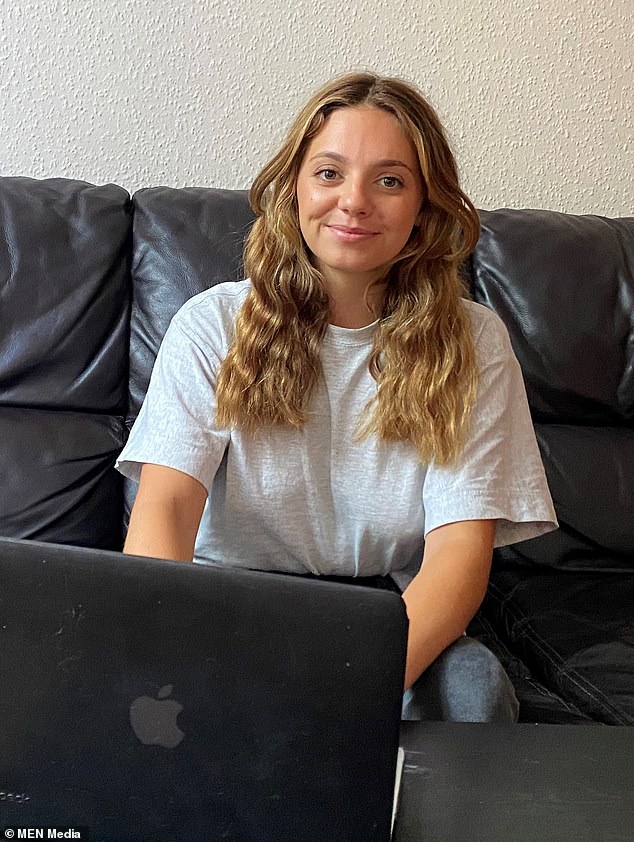 Sarah Burns, from Knutsford, was diagnosed with Mucinous Ovarian Cancer (MOC) in August 2020 aged just 25, after she began experiencing symptoms in December 2019

‘To be honest I didn’t think that was even a remote possibility; I was young, fit and ate well.

‘Now, months after my diagnosis I will be eternally grateful to that particular doctor for her swift action as I know for many women that is normally not the case leading to a late diagnosis.’

Sarah, a stylist with Terence Paul Hairdressing in Knutsford, endured more than a year of tests, treatment and surgery including an ultrasound which found a 10cm mass on her left ovary.

She also began to experience bloating, tiredness and needing to go to the toilet more urgently.

Following her diagnosis Sarah required further surgery to remove her left ovary and fallopian tube to ensure the disease had not spread outside the pelvis. 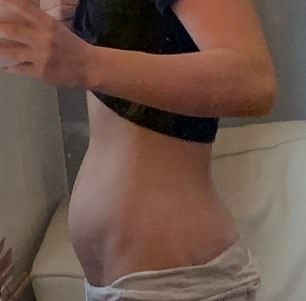 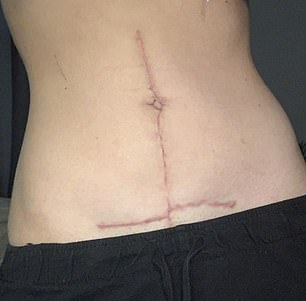 While Sarah was undergoing tests, she began to experience bloating (left), tiredness and needing to go to the toilet more urgently. Pictured right after surgery 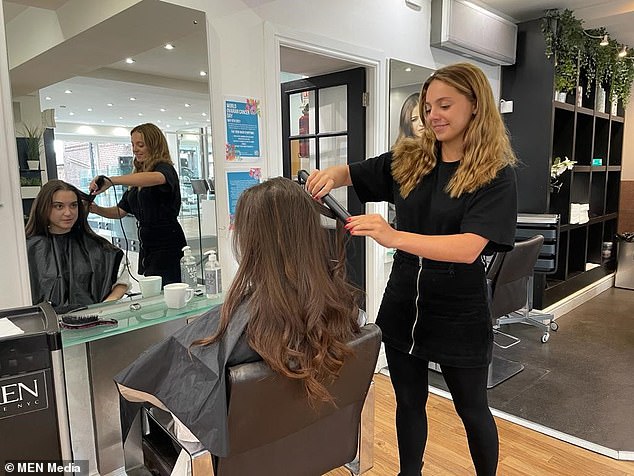 Sarah was forced to take almost a year off work and was delighted to have returned, and thanked her employers and colleagues for the ‘fantastic support’ she had received

After going through extensive treatment Sarah is now one year clear of the cancer, however she lives in fear of it returning.

The hairdresser has also undergone two rounds of IVF to save her eggs and has, for now, opted against chemotherapy, as that would end her hopes of having children naturally. She also claimed it does not work as well for her particular type of cancer.

Sarah was forced to take almost a year off work and was delighted to have returned, and thanked her employers and colleagues for the ‘fantastic support’ she had received.

Due to MOC’s rarity, it’s estimated there are only around 200 diagnoses a year in the UK and there is no active research or clinical trials. That’s something Sarah is determined to change. 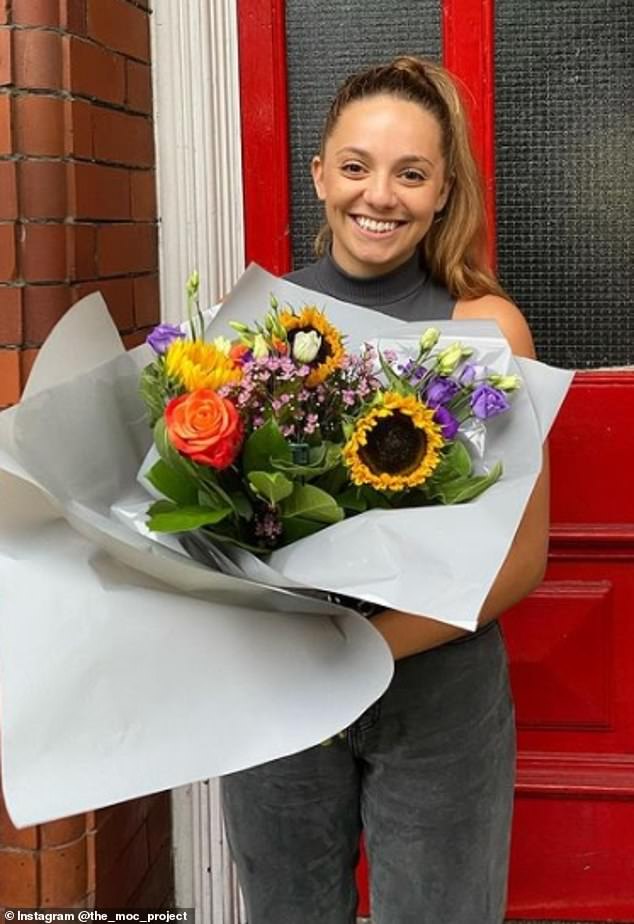 Sarah launched The MOC Project, an initiative dedicated to raising awareness and funds for the UK’s first research into the cancer

The hairdresser has launched her own fundraising campaign for urgently needed research into the disease in a bid to help other women like her.

Sarah launched The MOC Project, an initiative dedicated to raising awareness and funds for the UK’s first research into the cancer.

She said her goal is to get the scientific community interested in researching the cancer and raise the necessary funds to get work underway.

Ovarian cancer is a cancer of the ovaries, which are part of the female reproductive system that contain their eggs. There are two ovaries and both are attached to the womb. Cancer on the ovaries can spread to the nearby bowel and bladder.

It is the eighth most common cancer among women, and is most common in women who have had the menopause but it can affect women of any age.

About 66 per cent of ovarian cancer cases are diagnosed in the more advanced stages of the disease.

At the time of diagnosis, 60 per cent of ovarian cancers will have already spread to other parts of the body, bringing the five-year survival rate down to 30 per cent from 90 per cent in the earliest stage.

It’s diagnosed so late because its location in the pelvis means the symptoms can be vague and difficult to recognise, particularly early on.

They’re often the same as symptoms of less serious conditions, such as irritable bowel syndrome (IBS) or pre-menstrual syndrome (PMS).

The most common symptoms of ovarian cancer are:

See your GP if:

You have other symptoms of ovarian cancer that won’t go away – especially if you’re over 50 or have a family history of ovarian or breast cancer, as you may be at a higher risk.

‘I started the MOC project to make a change and to start raising funds that I hope will be used to help fund the first research project in the UK for this cancer type,’ she wrote on Facebook.

‘The MOC Project also aims to increase awareness of ovarian cancer and shows my personal journey of life after an OC diagnosis.

‘It’s bad enough getting cancer but wishing you had another cancer is even worse.’

Sarah added: ‘I am extremely passionate about this and refuse to wait around to see if my cancer returns and I get the same grim prognosis five years down the line.

‘I am determined to make the change for women like me. Ovarian cancer does not discriminate and can affect women of all ages.’

There is currently no screening test for ovarian cancer, and it is often misdiagnosed resulting in only 15 per cent of patients being diagnosed at Stage 1 when it is most treatable.

Sarah added: ‘It is so important to advocate for your own health. This is me taking control of my situation and doing something about it, sometimes it’s hard, but I will not let it win.’

She has already raised £7,500, despite the pandemic forcing the cancellation of a sponsored London-Paris bike ride, and has a special ticketed event later this month where she aims to double that amount.

She said: ‘I hope that ovarian cancer will follow in the footsteps of breast cancer and receive much-needed funding to start saving women’s lives.

‘I am hoping we can gain momentum with the campaign so that a UK gynaecological charity will support the grant as there is a massive inequality in ovarian cancer funding and it seems as if MOC has just been forgotten about.

‘I hope someone will come along and be interested in researching treatment options because they are very limited at present.’

Since telling her story on social media and launching the fundraising, Sarah has been contacted by other sufferers in the UK and from across the world and she hopes the project can be a source of support for women in a similar position.

She also urged all women to seek early medical advice if they suspected something was not right.