Whenever Boris Johnson ventures on to the hustle and bustle of a factory floor, a peculiar metamorphosis occurs.

Whatever it is, almost immediately the weight of the Westminster bubble and all its navel-gazing self regard appear to melt from his shoulders.

It’s like watching a recently hooked trout being plopped back into the river, water once again pumping through its oxygen-starved gills.

Yesterday, the Prime Minister travelled to the UK Battery Industrialisation Centre in Coventry to make a speech on his levelling-up agenda. 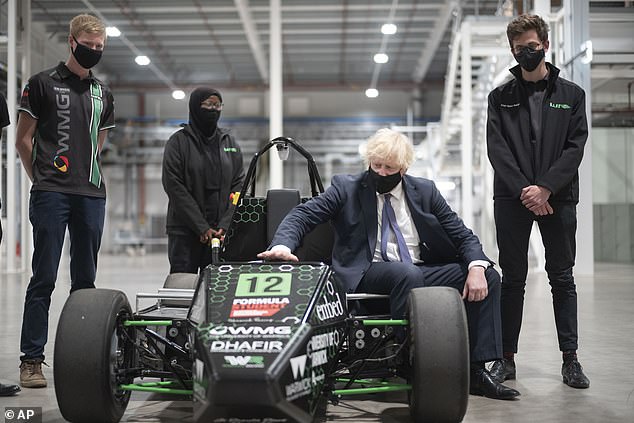 While the PM spoke at the UK Battery Industrialisation Centre in Coventry, he looked reborn from the moment he arrived

He looked reborn from the moment he arrived and very different from the haggard figure who had appeared at Wednesday’s PMQs.

For the first time in weeks, the old whizz-bang energy had returned. He jabbed his fingers, he issued daft slogans in energetic, Bren gun spurts. We even had the odd smile.

The only thing lacking any oomph was his complexion. A dab of the powder puff wouldn’t have gone amiss.

Boris’s central gripe was that we were London-centric. For too many people in Britain, ‘geography turns out to be destiny’.

It was ludicrous that someone from Glasgow could spend ten years less on the planet than someone living in Hampshire.

‘Talent and flair’ were evenly spread in the UK. Opportunity was not.

The PM recalled years ago as a journalist visiting East Germany, with its useless two-stroke engine cars and fake coffee.

Now look at the place. It was thriving. Ze Germans had levelled up. We had not.

(At this point, I found myself distracted by visions of Boris flailing around east of the wall among the snipers and bootleggers. D’you reckon his office had a sweepstake as to whether he’d return?)

Soon, we were on another whistle-stop tour of Boris-land, that mythical country ten years from now, where people whizz about in electric helicopters and robotic dogs yap in the street.

He wanted more bike lanes, more football pitches, less chewing gum on the streets. We’ve heard all this castles in the air stuff before, of course.

It’s been the theme of every big speech he’s done since becoming leader.

But voters love having a picture painted for them. And Boris does it jolly well.

How was he going to achieve all this, I hear you ask. Oh, come now! One cannot expect such vulgarities as detail in a Boris Johnson speech. 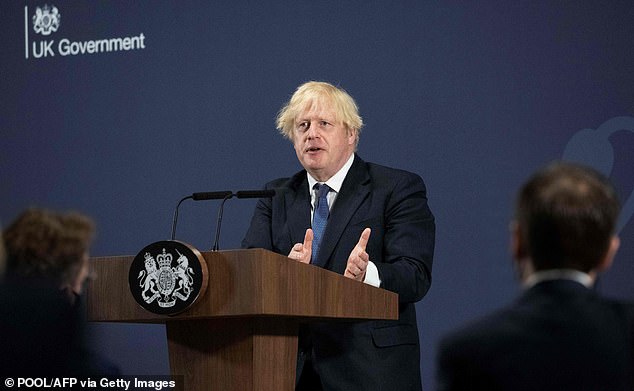 For the first time in weeks, the old whizz-bang energy had returned. He jabbed his fingers, he issued daft slogans in energetic, Bren gun spurts. We even had the odd smile

After all, did the powder-wigged Viennese flock to the Opera House to hear Mozart play Chopsticks?

This was a speech designed to quell fears that his obsession with ‘Red Wall’ votes would not come at the expense of the more traditional, affluent Tory seats.

The PM insisted this was not about ‘decapitating the tall poppies’. He would not make poor areas richer by making rich areas poorer.

But Boris may find he needs to toss southern MPs a bigger bone than this. After the recent Chesham and Amersham shocker, they’re pretty jumpy in the Shires.

His final offering (‘the yeast that lifts the whole mattress of dough’; ‘the ketchup of catch-up’) was a proposal for county mayors. (Are more politicians really the answer? Discuss.)

A quick-fire round of questions followed. An émissaire from Sky News badgered him not once but twice about footballers ‘taking the knee’. Groan.

What’s happened to Sky News by the way? Such a watchable channel not long ago. Now whenever I switch on, it’s running self-flagellating culture war stuff.

The most revealing moment came when the PM told a journalist from the BBC he wasn’t keen on Leon Restaurants co-founder Henry Dimbleby’s proposals for a ‘snack tax’ on sugary and salty food.

Although he admitted he hadn’t properly read Dimbleby’s report (does he ever read a report?), he didn’t like the sound of increasing taxes on ‘hard-working people’ – i.e. the poor.

If anyone at this point was in the vicinity of the Treasury and heard a sharp, banshee-like wail echoing down Whitehall, fret not.

That was just Rishi Sunak squealing as another much-needed revenue source went spiralling down the plughole.