Hey Hey It’s 50 Years was sweetly nostalgic, but more than a little uncomfortable

Nostalgia is a boom industry for television, though mining it can sometimes deliver uneven returns. As with all memory lane prime-time specials, Hey Hey It’s 50 Years leans deeply into nostalgia and poses what is perhaps an unanswerable question: can you really go back in time, even just for a couple of hours?

Like watching 8 mm or VHS family movies, there is something gently uncomfortable about a lot of what you see. It’s like watching mum and dad in paisley frocks and polyester safari suits sporting ’70s hair, giant sunglasses and platform shoes.

The Seven special on Sunday night attracted 1.8 million viewers nationally and 1.22 million in the capital cities, claiming number one spot in its timeslot. It’s a barrel of laughs but as the clock ticks it also starts to get a little off-putting, like a mirror in a carnival sideshow that slightly warps your memories. Whether it works perhaps lies in the depth of the difference between your memories and the distorted reflection you’re watching. 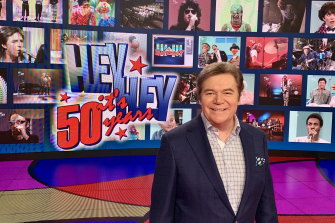 Hey Hey It’s Saturday was an institution on Australian television, running for 28 years on the Nine Network between 1971 and 1999. It was hosted by Daryl Somers and Ossie Ostrich, a puppet operated by Ernie Carroll, with running audio commentary from John Blackman. And it was co-hosted, at various times, by Jacki MacDonald, Denise Drysdale, Jo Beth Taylor and Livinia Nixon.

If you didn’t grow up with it, it’s hard to explain, except to say that it could lurch from in-studio performances from bands such as KISS, to vaudeville dance and comedy routines by Melbourne husband-and-wife Maurie Fields and Val Jellay. Sometimes in the same segment. It often made no sense, but in those days that didn’t really matter.

It is perhaps peculiarly Australian that a Saturday morning kids show that rebooted into a prime-time light entertainment format could command two hours of prime-time network television in 2021. Let’s be candid: in the US, NBC isn’t doing the same thing with The Banana Splits. 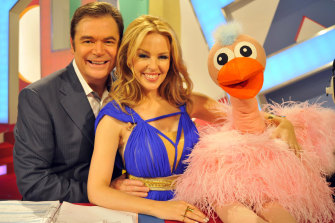 But perhaps it is no more of a miracle than the show itself becoming a cultural institution off the back of a jumbled assortment of stunts, sketches, amateur performances, life-sized talking plush toys and other random props.

Hey Hey It’s 50 Years gets off to a clunky start with a few bad scripted jokes and an unexpectedly flat clip package. With due credit to producer Jim McKay, who commissioned and named the show in 1971 and Somers mentor Ernie Carroll (also known as Oswald Q. Ostrich), the history lesson then got properly started.

In purely nostalgic terms, it’s fun. Footage of Jane Kennedy dressed as Demis Roussos performing on the earlier morning iteration of Hey Hey is worth the price of admission alone. (She came first and won a Mark Hunter album.)

It is also where other artists got their break: Kennedy’s now-husband Rob Sitch is seen, performing a now-iconic Thunderbirds skit with Nick Bufalo and John Harrison, along with singer Vanessa Amorosi and apparently ageless comedian Dave Hughes.

There is even a clip of Cate Blanchett on the show’s amateur talent segment Red Faces, though to suggest this was the launchpad for her career might stretch things a step too far.

The legacy of Hey Hey speaks to the relationship growing kids have with their television sets. It might sound quaint to social engineers, but much in the same way a generation of kids were bound to the ABC’s Metal Mickey/Monkey/Battle of the Planets/The Goodies/Doctor Who late afternoon/early evening programming block, another generation was bound tightly to the evolution of Hey Hey.

In cultural terms, there are problems with some of the show’s historical content. The show’s now-infamous “blackface” sketch passed without fuss when it first aired but turned into a controversy when the group was asked back to perform on a reunion special. That does not rate a mention here, but no doubt taints the memory of the show for some.

Ironically, it is the Red Faces segment that also bestows the special with some of its best flashbacks: a brilliantly funny team of would-be bobsledders using chairs for props, a tiny child violinist named Little William and a pair of human crash-test dummies re-creating crashes in slow-motion.

The rest is a panoply of people including singer Kylie Minogue, journalist Helen Wellington, US singer Suzi Quatro and singer/dancer Rhonda Burchmore, though a flashback to Hey Hey It’s Greased Lightning, featuring Somers and Burchmore as high-school sweethearts Danny Zuko and Sandy Olsson, pushes many things, not least of which is good taste and common sense.

Listening to the observations and recollections of people like Daryl Braithwaite, Frank Woodley, Jacki MacDonald and Jane Kennedy is sweetly nostalgic. And watching professional wrestlers demolish the set, even if pre-planned, makes great TV. But there are also uneven moments. Reducing co-host JoBeth Taylor to a short congratulatory video, for example, seems off.

There is one properly stunning highlight: Tom Jones singing My Yiddishe Momme with John Farhnam. Off the back of those few minutes alone, you might forgive almost anything.