Victoria’s major hospitals failed to meet their key targets for patients requiring urgent care as the system came under sustained pressure over the past financial year, with hundreds of people forced to languish in the emergency department for more than 24 hours.

The healthcare system’s struggles have been laid out in detail in the hospitals’ 2021-22 annual reports, which were tabled in the Victorian parliament last week. 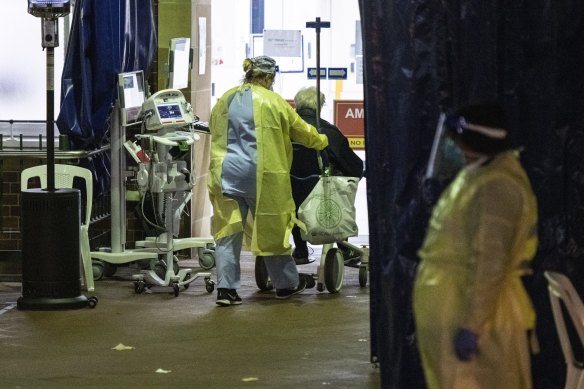 The Western, Northern, Alfred, Austin and Bendigo hospitals all missed their targets to transfer ambulance patients within 40 minutes, attend to emergency patients within the clinically recommended time frame, and move patients on from the emergency department within four hours.

Of those five hospitals, Western Health fared the worst: 65 patients at its Footscray campus were forced to stay in emergency departments for more than 24 hours, while 366 patients at the Sunshine facility languished there, according to the annual report.

The target for state hospitals is to have no patient stay in the emergency department for more than 24 hours. Northern Health and Alfred Health met those targets, but at the Austin, there were 20 people in emergency for longer than 24 hours and four people at Bendigo Health.

Dr Belinda Hibble, the Victorian chair of the Australasian College of Emergency Medicine, said the pandemic had exacerbated the pressure Victorian hospitals were already under.

“The pandemic just tipped everything over the cliff,” Hibble said. “You can see from the data there is tremendous pressure being placed on emergency departments across the system. We can’t see the average increased stay in ED, we can only see patients who stayed for more than four hours or 24 hours. What about patients who remained for 12 or 23 hours?”

Hibble said the college’s data, based on 2020-21 figures, showed it took most patients who were admitted to emergency departments 13 hours to leave hospital, and that this figure had been steadily increasing for the past five years.

She called on governments to urgently tackle the root cause of overcrowding, which includes a shortage of hospital beds to transfer people to.

The bed shortages have worsened by the resumption of elective surgery that had been delayed by the pandemic, and high numbers of patients who were ready to be discharged from hospital but for whom no beds were available in rehabilitation or aged care facilities.

“We do know that over the past five years, the number of available beds decreased by about 6 per cent,” Hibble said.

She urged the state government to increase the capacity of staffed inpatient beds, invest in more acute medical and surgical units, and staff hospitals to better reflect the 24/7 nature of acute care.

A Victorian government spokesman said hospitals across the world were balancing record demands with significant numbers of staff off sick with COVID-19, rising case numbers in the community and children having had less exposure to “childhood illnesses”.

“We are also seeing an increase in ED presentations of people with deteriorating conditions who could have avoided a trip to the hospital if they had seen their GP earlier, which is why there is no more urgent priority for National Cabinet than reforming the primary care system,” the spokesman said.

Roderick McRae, the Victorian president of the Australian Medical Association, said while the data was between six and 18 months old, the problem in Victorian hospitals had only worsened since the end of the past financial year.

He said staff were leaving in droves and Australians had become sanguine about the impact of COVID-19 on vulnerable people and the hospital system.

“Jesus was born in a stable because the hospitals were full,” McRae said. “This is exactly what we’re seeing now in the public hospital system. Hospitals are full, they’re stressed, and nobody wants to know about the number of people in hospital because of COVID anymore.”

The 2021-22 reports show while the Western, Northern, Austin, Alfred and Bendigo hospitals admitted all patients requiring Category 1 elective surgeries, such as a breast lump removal and neonatal surgeries, within 30 days, they missed their targets on Category 2 and 3 surgeries.

At Western Health, 75 per cent of all elective surgeries – including Category 1 – were admitted within the clinically recommended time frame. At the Northern, this figure was 72 per cent; at the Alfred it was 73 per cent; at Austin it was 75 per cent; and at Bendigo Health it was 78 per cent. 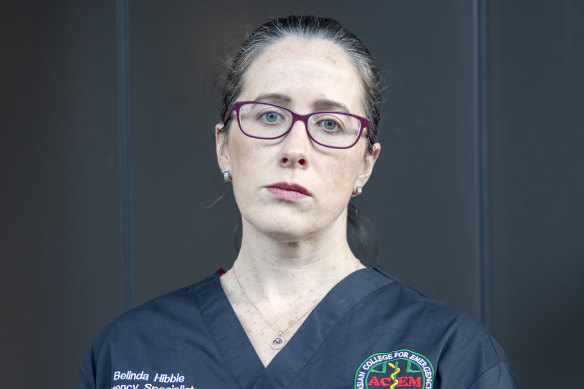 Dr Belinda Hibble is concerned not enough is being done to address the cause of hospital overcrowding.

An Alfred Health spokesman said the number of people seeking care at the hospital had grown by 8 per cent in a year to 70,088 people. He said the increased demand for medical attention came while an increasing number of staff were furloughed after contracting COVID-19.

“These significant challenges meant it was not possible to meet some operational targets, including those for elective surgery, which had to be paused at times due to the lack of staff availability and hospital capacity,” the spokesman said.

“Dedicated staff continued to go above and beyond to provide the best possible care for our community including providing lifesaving emergency surgery when needed.”

A spokeswoman from Austin Health said the hospital was under pressure due to staff being furloughed, the restrictions on elective surgery and the additional infection control procedures that were being implemented to keep staff and patients safe.

“Over the past six months, Austin Health has worked hard to implement a comprehensive recovery plan and continues to make good progress in relation to this despite the ongoing challenges provided by recurrent waves of COVID-19,” she said.

Bendigo Health acting chief executive David Rosaia said the hospital was continuing to feel the impacts of the pandemic.

“Our staff have done incredibly well during a challenging year that has seen record demand for our health service, staff furlough, multiple COVID waves and hundreds of COVID inpatients,” Rosaia said.

A Western Health spokesman said the hospital was experiencing the same workforce challenges faced by healthcare services across the world.

“At an operational level we have initiated a suite of measures to facilitate timely access and treatment, and we are continually reviewing and improving our services to ensure we always offer best care to our patients,” he said.

A Northern Health spokesman said: “We continue to focus on ensuring our community have timely access to care and are cognisant of the fact that we will need to continue to work through future waves of Covid-19.”

“It’s shameful that they have been kept from the public for as long as they have by the Andrews Labor government,” Crozier said. “Victorians are not getting the care they deserve under Labor, and the Liberals and Nationals will continue to fight for a stronger health system and better patient outcomes.”