BLACK Friday shoppers are being urged to watch out for fake deals as we reveal how some items were cheaper before AND after the big day last year.

Popular products including Panasonic TVs, Apple iPhones and XBox consoles were sometimes up to £680 cheaper after Black Friday in 2019. 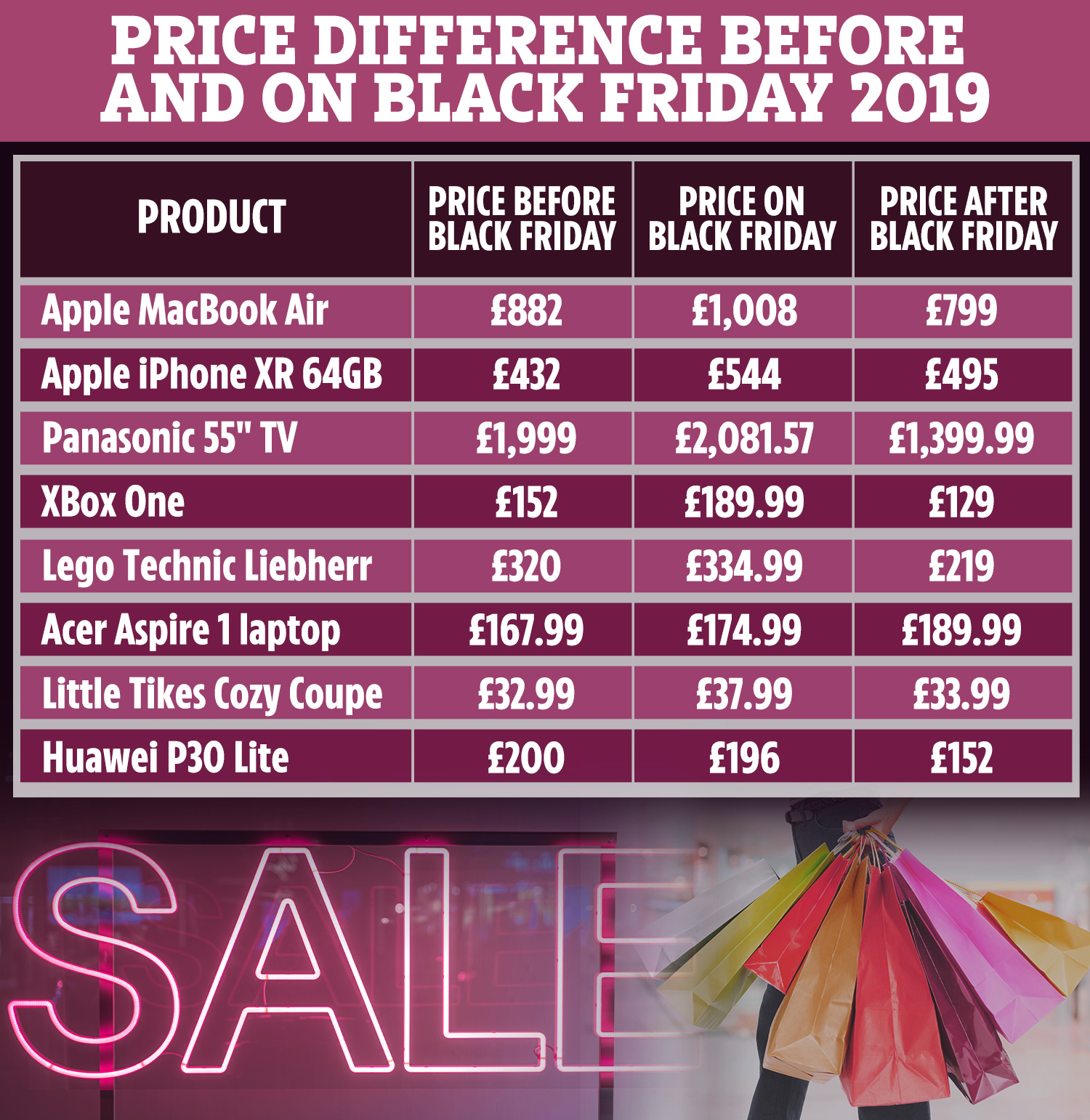 Other items that were found to be more expensive on Black Friday include Lego, Nintendo Switch consoles and Acer laptops.

The research from comparison site PriceSpy highlights the importance of comparing prices before handing over any cash.

Experts say if a product was cheaper before Black Friday, it’s likely it’ll be cheaper after as well.

The biggest price difference found by PriceSpy for 2019 was a Panasonic 55" TV which fell in price by £681.58 after Black Friday.

How to compare prices to get the best deal

JUST because something is on offer, or is part of a sale, it doesn’t mean it’s always a good deal.

There are plenty of comparison websites out there that'll check prices for you – so don't be left paying more than you have to.

Most of them work by comparing the prices across hundreds of retailers.

Here are some that we recommend:

It was also cheaper before Black Friday, with the lowest priced tracked at £1,999 on November 24.

Before Black Friday, this Macbook Air was also cheaper than the best Black Friday price at £882.

It was also cheaper before Black Friday when it was priced at £320 on November 11.

The price comparisons aren't from the same retailers. Stores will launch sales at different times, so it's important to compare prices often.

Black Friday falls on November 27, tomorrow, this year – but most high street brands have already kicked off their sales.

Amazon was one of the first, having launched its deals one month ago.

Some retail experts have been calling it “Black November” due to the number of early sales.

PriceSpy UK commercial director, Ossie Bayram, said: "We looked at some of the UK's most popular products last year, comparing prices between September and Black Friday and then between Black Friday and February.

“It shows that many items were actually more expensive on Black Friday itself.

“There are deals to be had on the day – but do your homework and check out what the product cost in the weeks running up to the sales. If it was cheaper before, it'll likely be cheaper in the future too."

Of course, this doesn't mean that there aren't bargains still to be had this Black Friday – here are our top early deals including KitchenAid and FitBit.

Here are more live Black Friday 2020 deals and the discount codes you need to get more savings.

END_OF_DOCUMENT_TOKEN_TO_BE_REPLACED

END_OF_DOCUMENT_TOKEN_TO_BE_REPLACED
Recent Posts
We and our partners use cookies on this site to improve our service, perform analytics, personalize advertising, measure advertising performance, and remember website preferences.Ok