THE cost to fill up the car tank varies wildly across the UK, and motorists in the South East are currently the worst off, research shows. 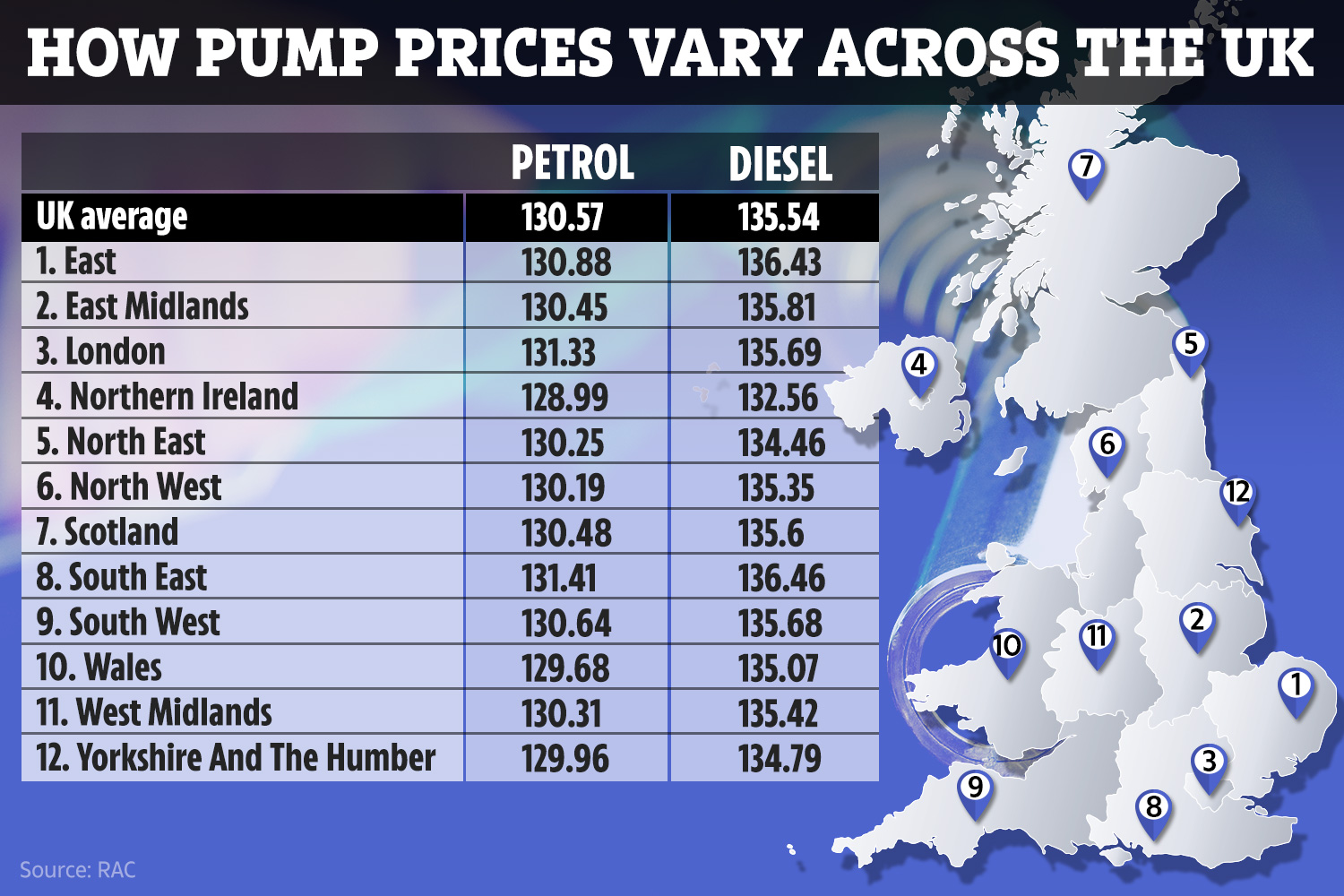 Motorists in Northern Ireland are in luck because they're currently paying the lowest price at 129.68p per litre of petrol and 132.56p per litre of diesel, according to data from RAC Fuel Watch.

It's still not good news though, as UK motorists have been hit with price hikes on fuel for the fourth month in a row, making petrol 11p a litre more expensive than it was in February and diesel 7p pricier on average.

But even if you live in the areas where you have to fork out the most for your fuel, there are still ways to reduce the costs.

Of course, driving to a completely different area doesn't make much sense, but by using sites such as PetrolPrices.Com or Confused.com, you can search prices of UK petrol stations to find out where is the cheapest in your area.

All you need to do is enter your postcode and say how far you want to travel.

Another way to get the cheapest fuel is by locating places where there are many stations close together, as the competition usually drives down prices too, according to Petrolprices.

Or if you live in a posh area, drive to a less posh one as you may find that prices are a few pence a litre lower there too. 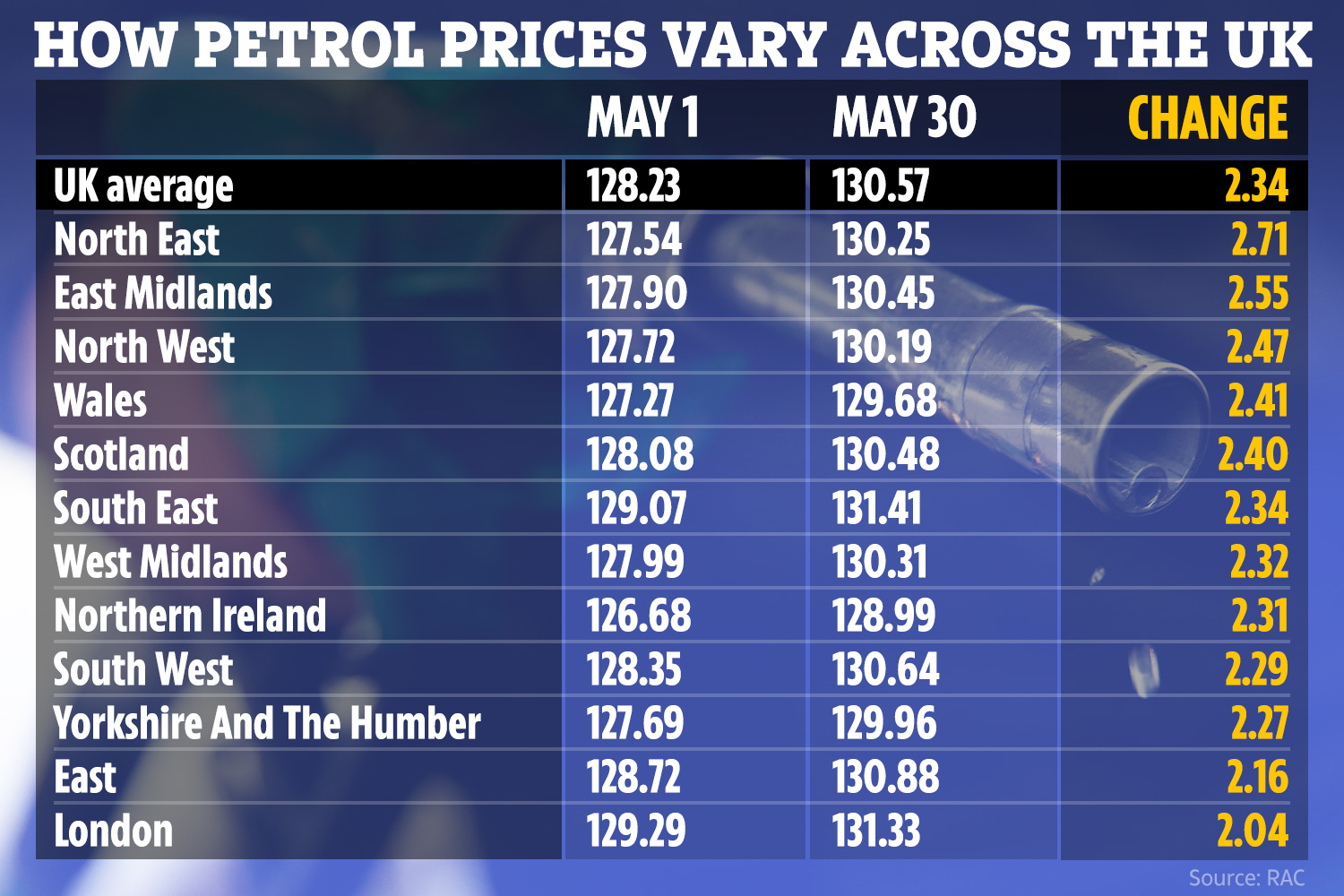 In comparison, in February, a litre of  petrol cost an average of 119.54p and diesel was 128.64p, according to data from RAC Fuel Watch.

Because of this, petrol is now only a penny from its five-year high of 131.58p which was recorded in October 2018.

The price hikes in May also varied wildly across the country though, with the North East being hit with the largest monthly price increase at 3.71p, while motorists in London saw the lowest rise at 2.04p per litre.

Yet it's not good news for drivers in the capital as the city already had the most expensive prices at the start of May at 129.29p per litre. 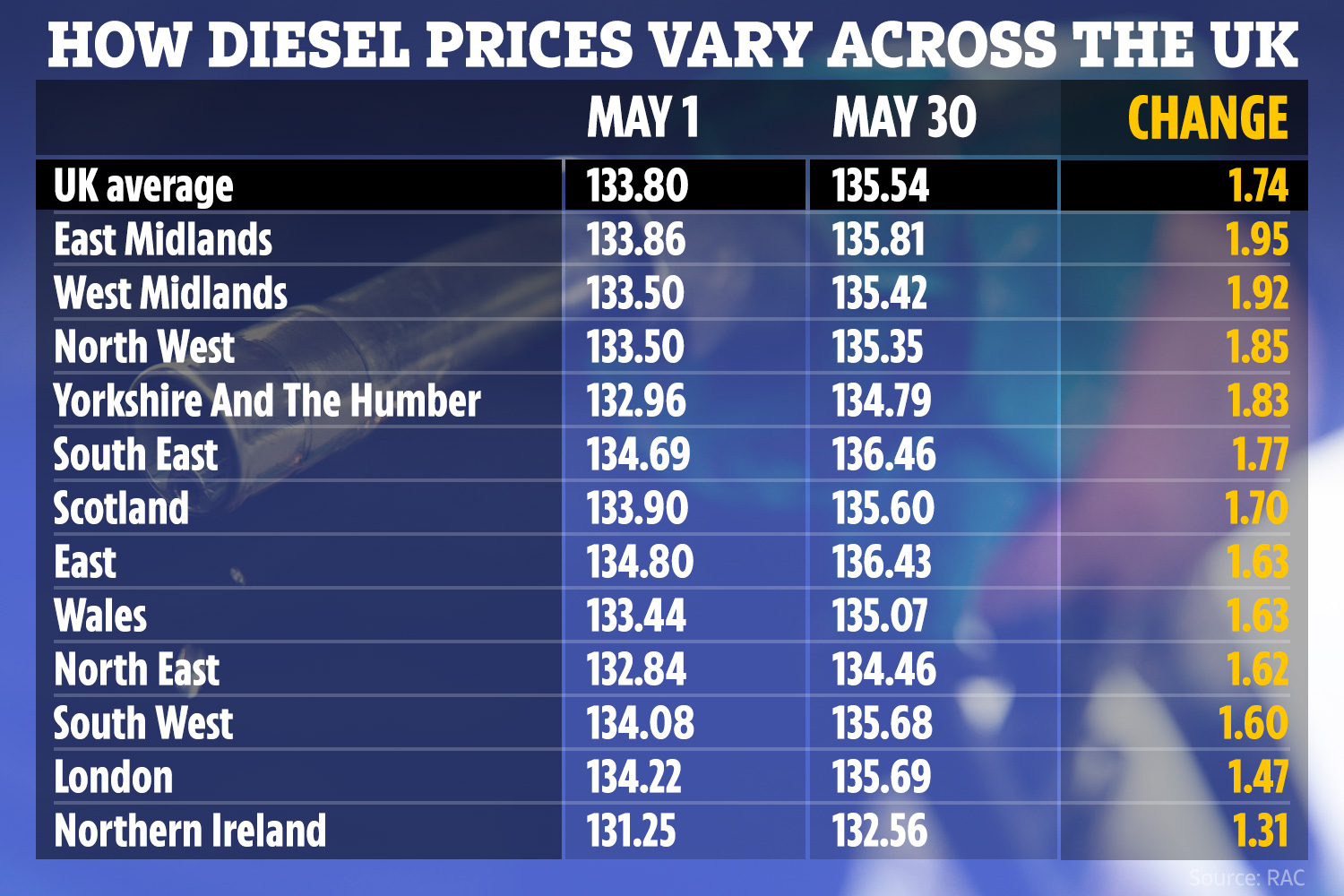 Meanwhile with diesel, motorists in the East Midlands suffered the biggest hike at 1.95p per litre, while residents in Northern Ireland "only" saw a 1.31p increase.

The May pump price increases mean a tank of petrol for a 55-litre family car now costs an average of £71.81 – an increase of £1.29 in May and £6 more than at the start of February.

The rise in pump prices follows continued increases in wholesale prices, although the cost of oil also dropped by 9 per cent, according to RAC.

Ways to cut down on your fuel costs

RAC fuel spokesman Simon Williams said: "May was another miserable month for drivers with the fourth straight average price rise of both petrol and diesel taking us near to a five-year high.

"Luckily though, oil closed out the month 9 per cent lower which should soon translate to lower prices at the pumps.

“After suffering a steady flow of daily fuel price increases because of rising wholesale costs we urge retailers to reflect this sudden drop in the price of oil by cutting their prices as soon as possible.

"The supermarkets who buy fuel more often than smaller retailers due to the large volumes they sell should be able to do this straightaway to bring some welcome relief to drivers who have had to endure seemingly ever-increasing prices."

Petrol prices rocketed by 5p a litre earlier in April – the largest increase in 19 years.

The good news is that Morrisons is currently offering motorists 5p a litre off fuel until Sunday.