A husband and wife whose marriage was at breaking point have insisted including another woman, who moved in one month later to form a polyamorous relationship, has re-ignited their spark.

Michelle told Kris that she was bisexual when they first met, but throughout their relationship they struggled to express their feelings.

The pair vowed never to cheat on one another as they were committed in their relationship, but their lacking sexual pleasures put a huge strain on their romance, which meant they almost divorced three times.

But since meeting their girlfriend Sarah Letsch, 22, who Michelle first connected with on Facebook, they say their relationship has never been better. 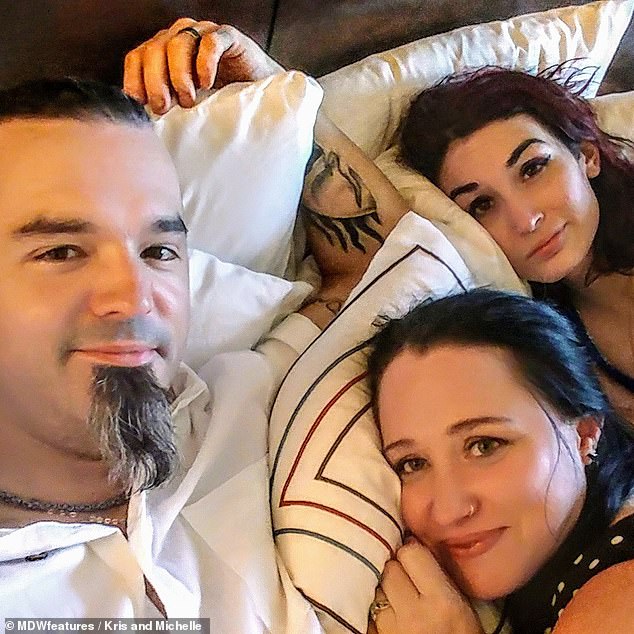 Kris Lana, 34 (left), and wife Michelle, 37 (centre), entered into a polyamoros relationship with 22-year-old girlfriend Sarah Letsch (right) and believe it has saved their relationship 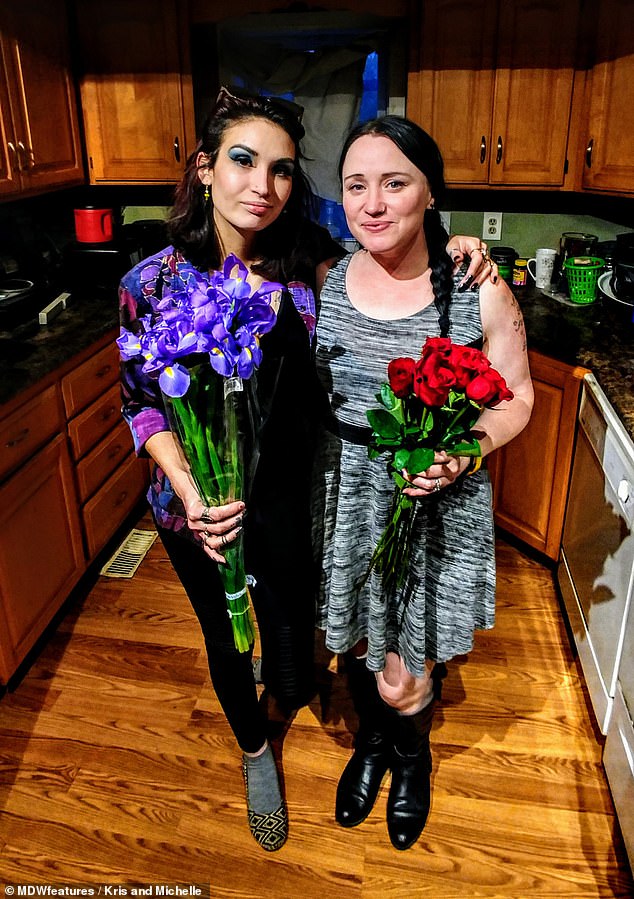 Sarah (left) and Michelle (right) met on a lesbian Facebook group. Michelle started talking to swimming instructor Sarah, from Minnesota, before the pair went on a date with Kris 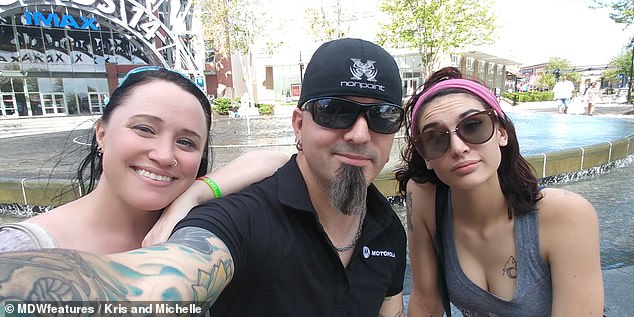 As soon as the trio went on their first date sparks were flying, and within one month Sarah (right) moved in with the couple and their daughter

Kris and Michelle tried various ways to keep their relationship alive including dabbling in the swinger lifestyle, which lead them to meet their first girlfriend.

However, the polyamorous relationship didn’t work, as the other woman was not looking to settle down.

In 2019, Michelle was part of a lesbian Facebook group where she began chatting to swimming instructor, Sarah Letsch, 22, from Minnesota, USA.

They got on well with each other with sparks flying between the three of them when they met for their first date. 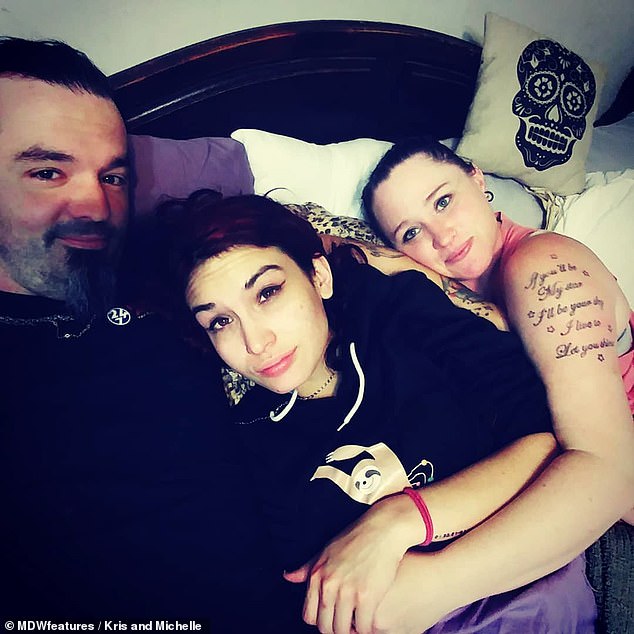 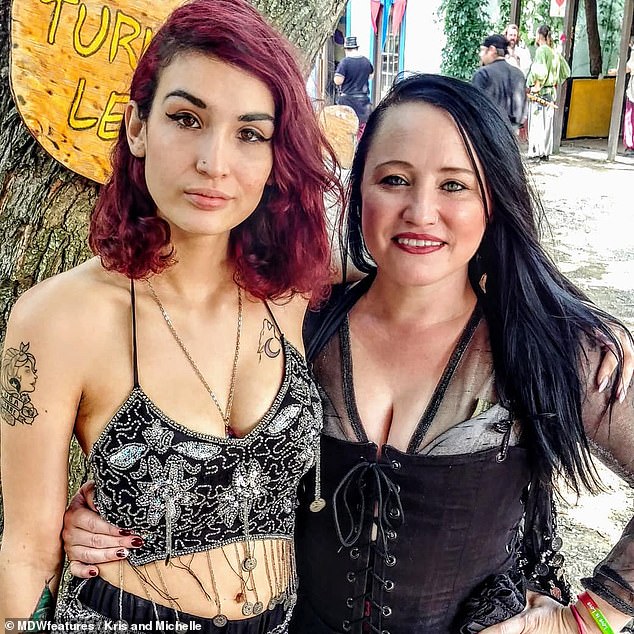 Michelle (right) pictured with her girlfriend, Sarah (left). When she first met her husband, she was honest about being bisexual, but the pair struggled to communicate about what they wanted from each other in their relationship

A month after they started dating, they started living together as a triad with Michelle and Kris’ 13-year-old daughter, who enjoys spending time with their new addition, Sarah.

Since they have been in a polyamorous relationship, Kris and Michelle insist their marriage has never felt so alive.

‘Michelle and I had previous relationships that ended very badly and at the exact same time. So even though we were married, we weren’t communicating; we weren’t telling each other the things we liked or wanted,’ Kris said. 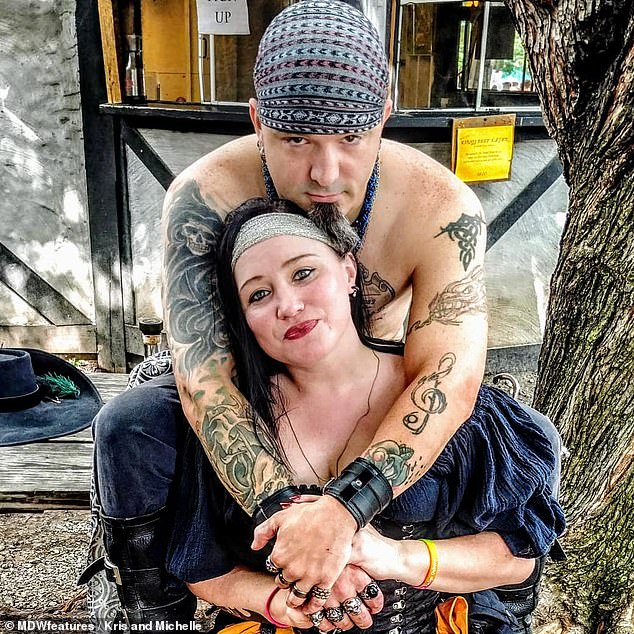 Michelle and Kris were close to divorcing three times, on separate occasions, as they struggled to talk to one another about their feelings 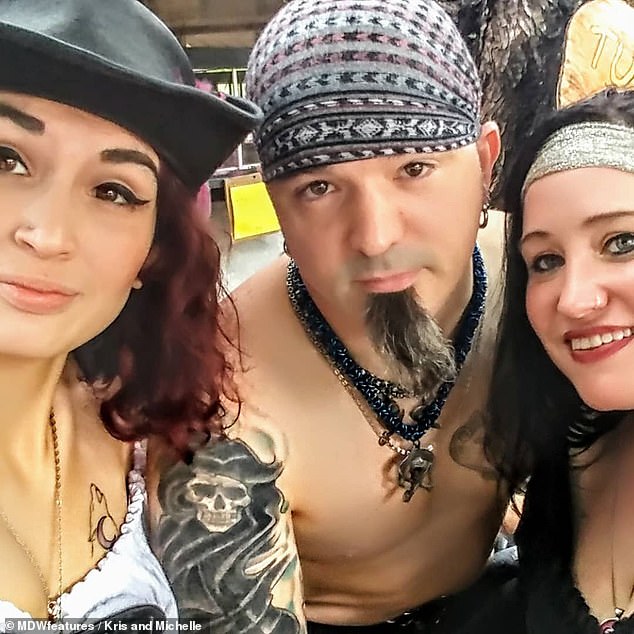 Sarah (left) has given Michelle and Kris, from Kansas, the spark they needed to keep their romance going, and moved in with the couple within a month of their first date

‘Cheating was never on our minds; we just didn’t know how to tell each other that Michelle liked women and I was a voyeur. Long story short, we almost got divorced on three separate occasions.

‘Once we started talking to each other and opening up more about our feelings and likes, we realised our marriage was stronger than we could have imagined, and the fearful close-call divorces could have easily been resolved.

‘Being poly has been hard for us. We’ve met several great girls, but none of them were either ready for a commitment, or just wanted to have us for their first threesome/bisexual experiment – until we met Sarah.

‘Michelle and Sarah are both part of a lesbian group on Facebook. They met in the group and started talking. Eventually that led to our first date; we hit it off really well. 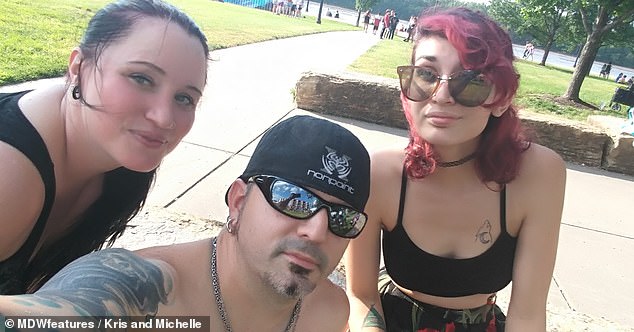 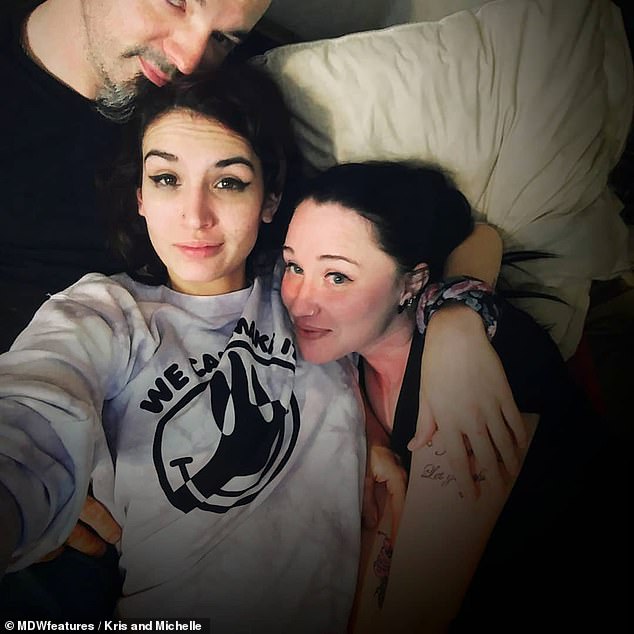 Michelle and Kris enjoyed a holiday to Florida, during which time Sarah house sat for them. But on their return from their holiday they felt they couldn’t kick her out and asked her to live with them permanently

‘Michelle and I had a vacation to Florida scheduled before we met Sarah. So, while we were gone, we asked if she’d like to house sit for us.

‘Then after a week of being gone, it felt weird to come home and tell her, “ok go back home now”, so we asked her to move in and now we’re one big happy family.

‘It actually gets us going. It makes us feel alive again, as clichéd as it sounds. We’ve been together for twelve years; we know each other’s quirks, we can finish each other’s sentences, we can order each other’s food and drinks.

‘Sarah being in our lives has reignited our flame, and given us the new relationship energy that fades away after so many years.’ 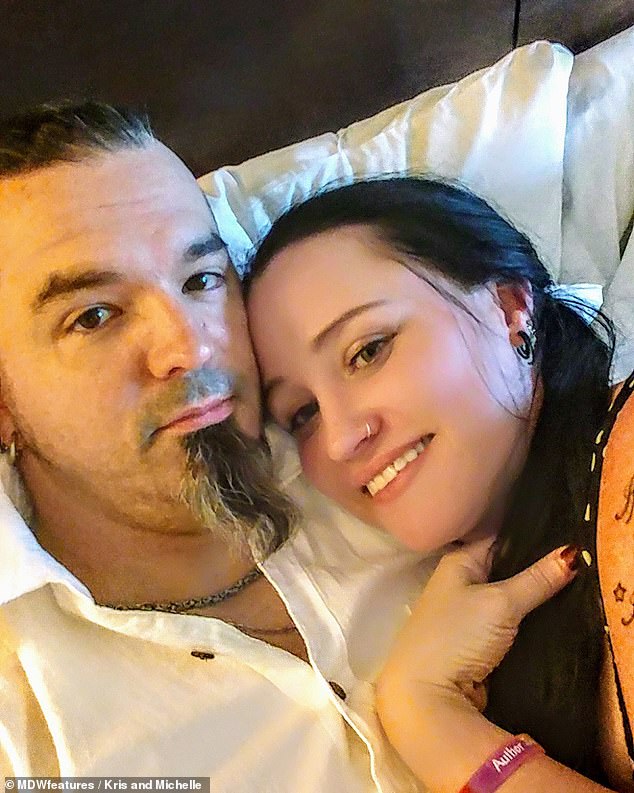 Michelle admitted to husband Kris she was bisexual, and the couple dated women on and off in private for years before they met Sarah and entered into a polyamorous relationship

Michelle says that she revealed their polyamorous relationship to their daughter to make her feel comfortable coming out as bisexual.

‘I lived in the closet of bisexuality most of my life. I told my husband from the moment we met but kept it from most of our family,’ she said.

‘We dated women off and on for years, in private, in silence, until two years ago. On national coming out day of 2017, I told the world that not only was I bisexual but that I also was polyamorous.

‘Our daughter came out to us as bisexual a couple years ago. So, to make her feel more comfortable with her decision in telling us, I decided to tell her about my sexuality and about us being poly. 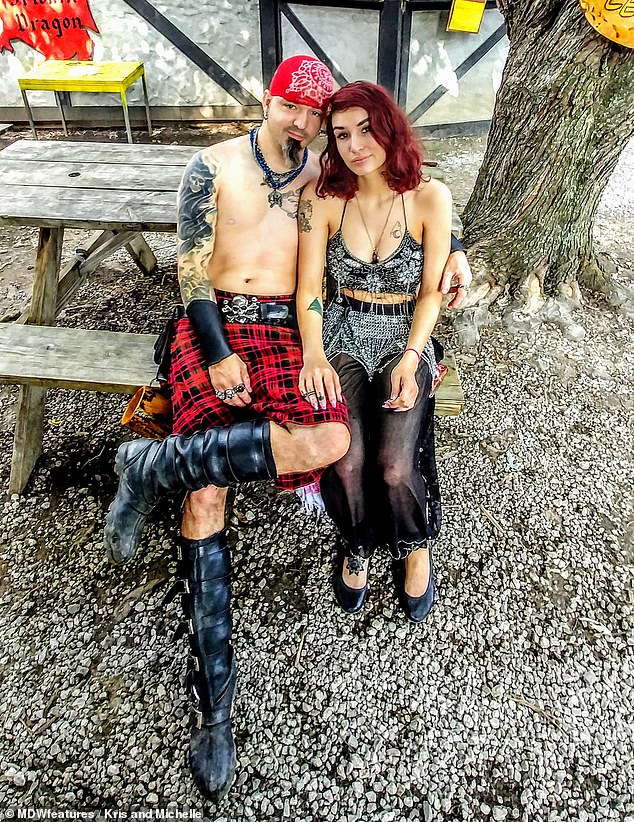 Kris has admitted the polyamorous relationship can spark jealousy ‘sometimes’, but they work it out by communicating with one another and opening up about their feelings 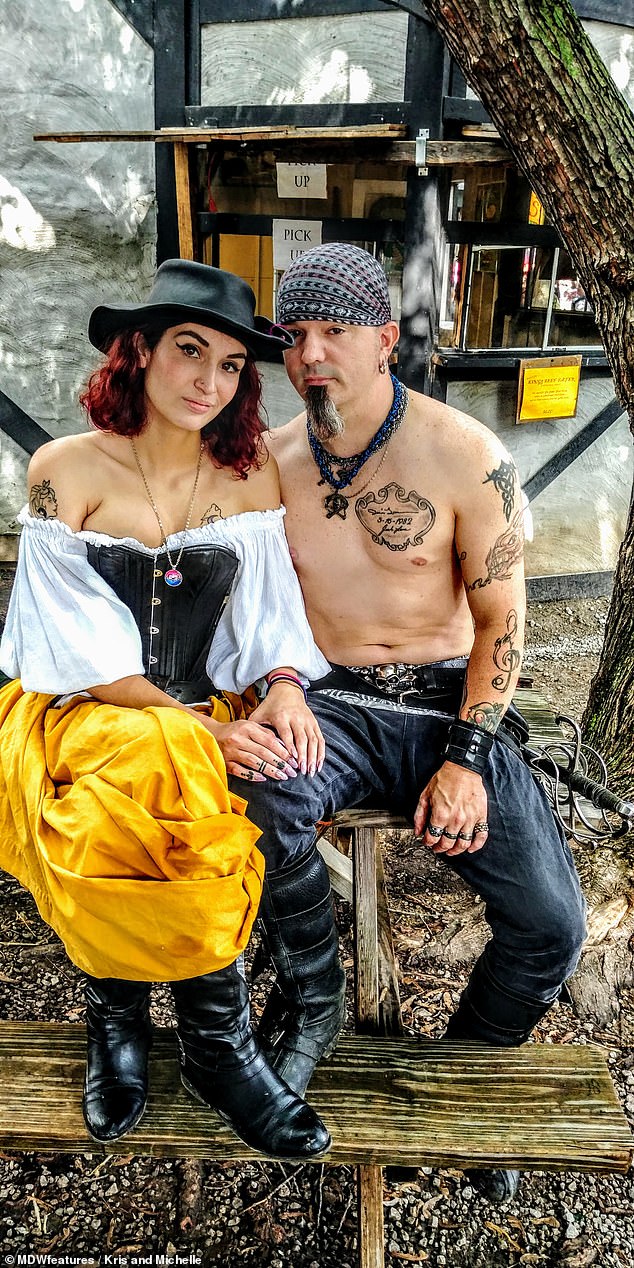 Sarah has sparked up a close bond with Kris and Michelle’s daughter, and the pair will often bond over YouTube videos, or games when they are together 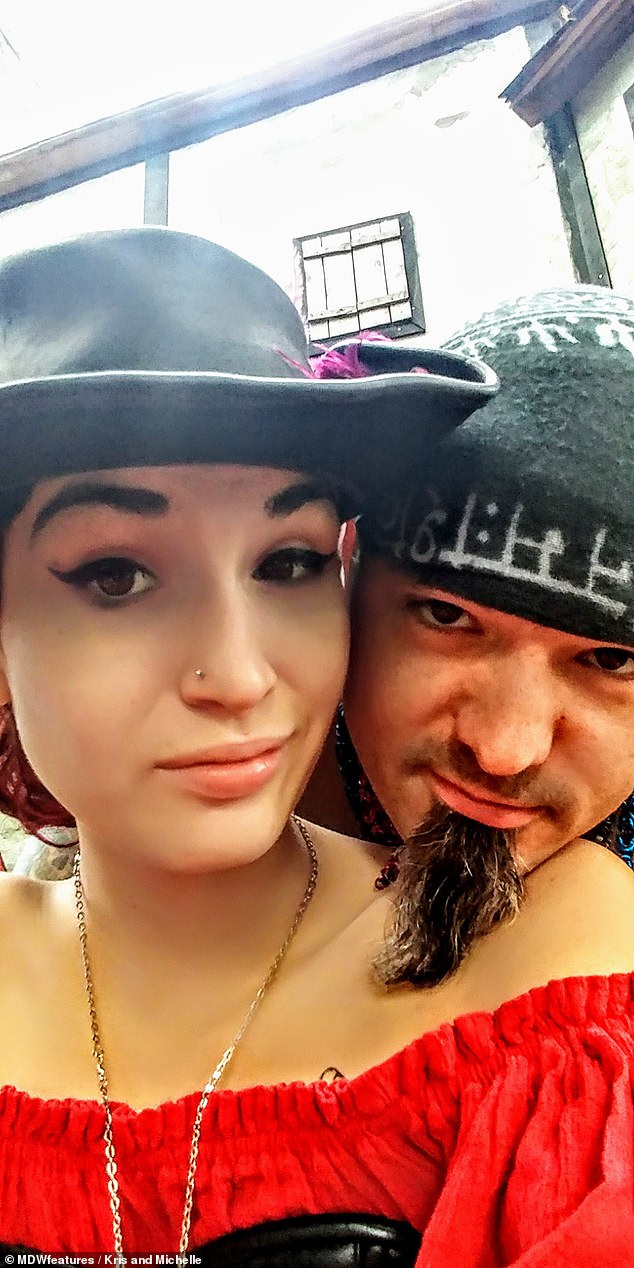 Sarah has been the key to keeping Kris and Michelle’s marriage ‘alive’, as she has made them feel like they are new lovers once again 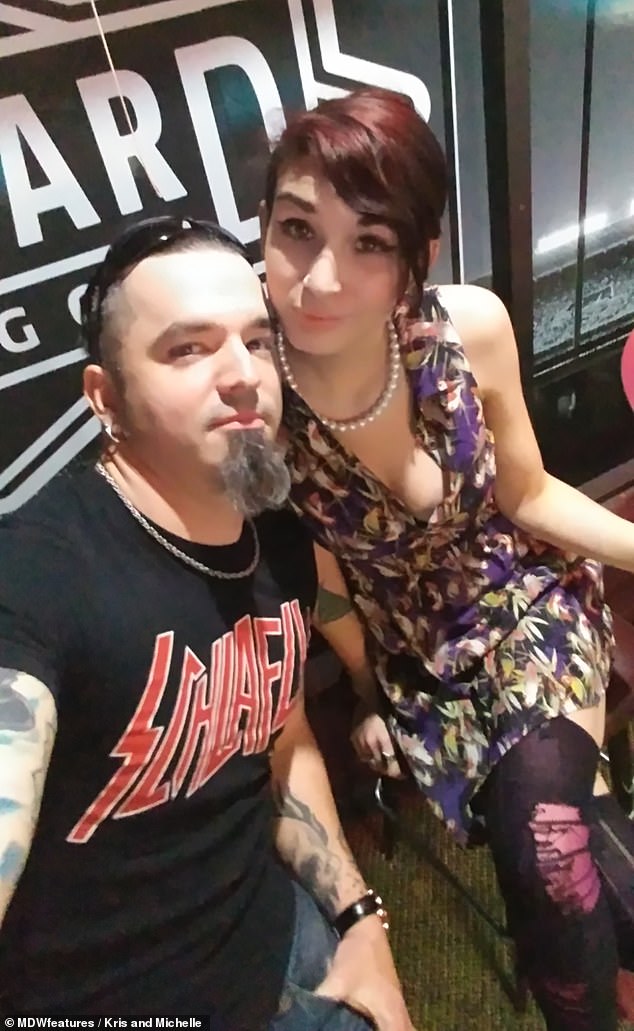 ‘Her response was, ‘you mean like an open relationship?’ to which I said, ‘well kind of. Except we do it all together’. She’s very accepting and loves Sarah to death.

‘They hangout sometimes; they play games and watch YouTube videos together. It’s really refreshing to see them get along. Our daughter respects Sarah and listens to her as she would any other parent.’

Kris says that while their relationship can spark jealousy at times, the way they get through it is by open communication just like with any other relationship.

‘Jealousy is always a factor and the solution is open communication; telling each other our feelings the moment they occur instead of bottling them up is key,’ he said. 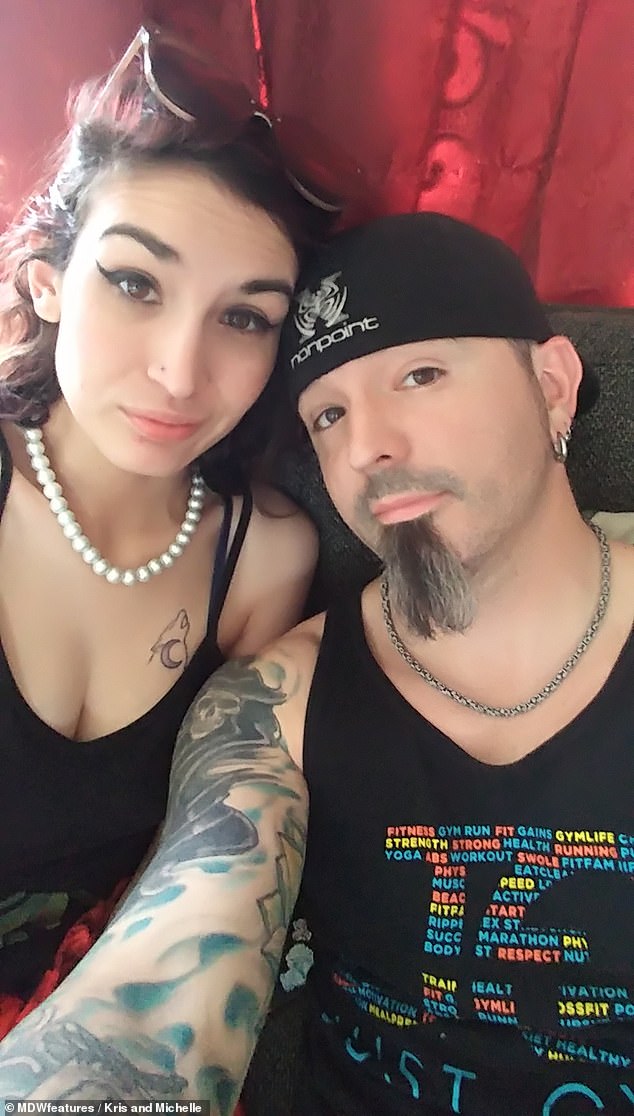 Although Kris has insisted there can be moments of jealousy in their polyamorous romance, he says it is essentially for all of them to talk honestly about their emotions to overcome any issues 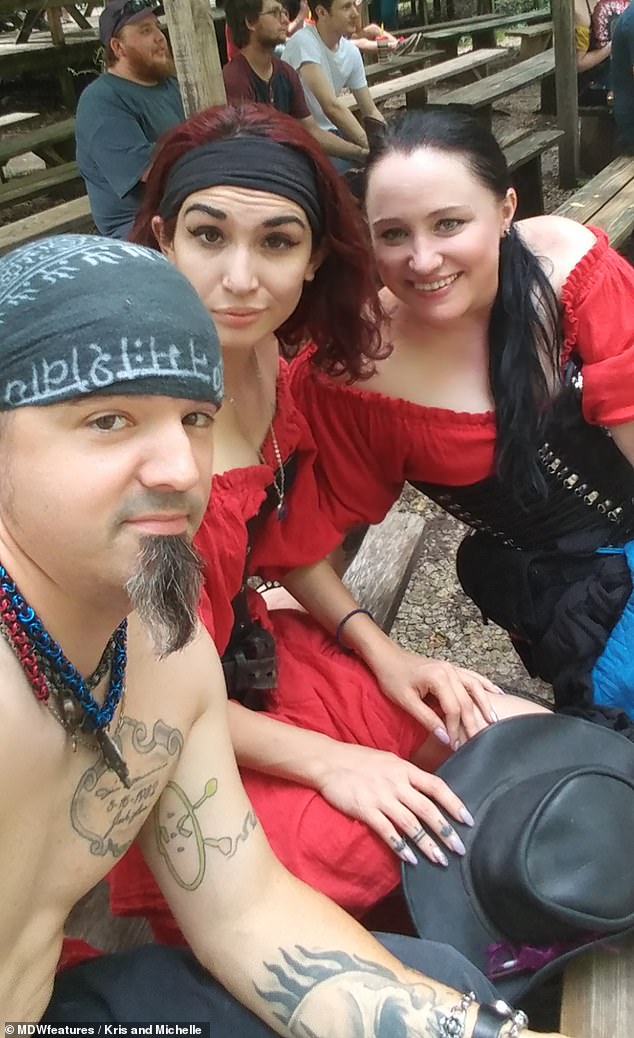 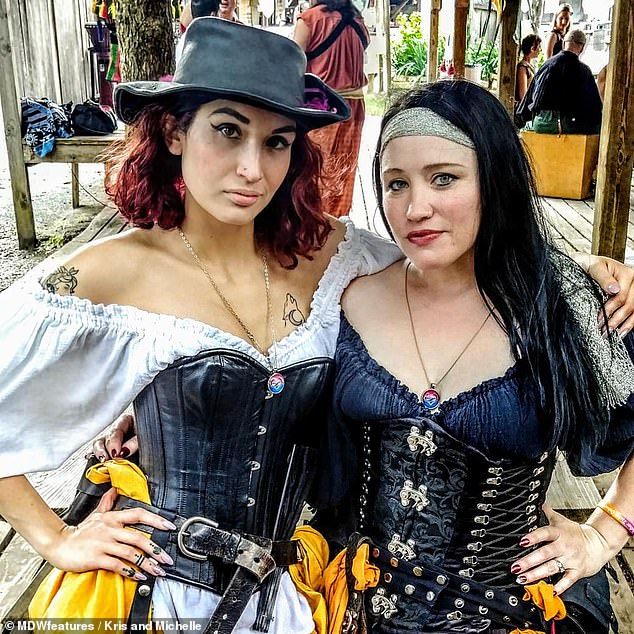 Sarah (left) has been polyamorous for many years, and has openly dated couples before, which was exactly what Michelle and Kris were looking for in their polyamorous relationship

‘The most important part is to allow cooler heads to prevail in tense situations. Sometimes, one of us will just need to be left alone for a while to gather thoughts before we address the situation.

‘Polyamory doesn’t mean a lack of jealousy, but the willingness to take responsibility for your emotions and to talk them through with your partners.

‘For me and Michelle it’s been the hardest finding someone compatible; someone who isn’t afraid to love us both, someone who, in the long run, wants to be committed to us as we are to them and to each other.

‘We struggled for many years with all of this. But then Sarah came around. Sarah has been poly for several years and has dated couples in the past. However, not on this level and not exclusively. It was a breath of fresh air. 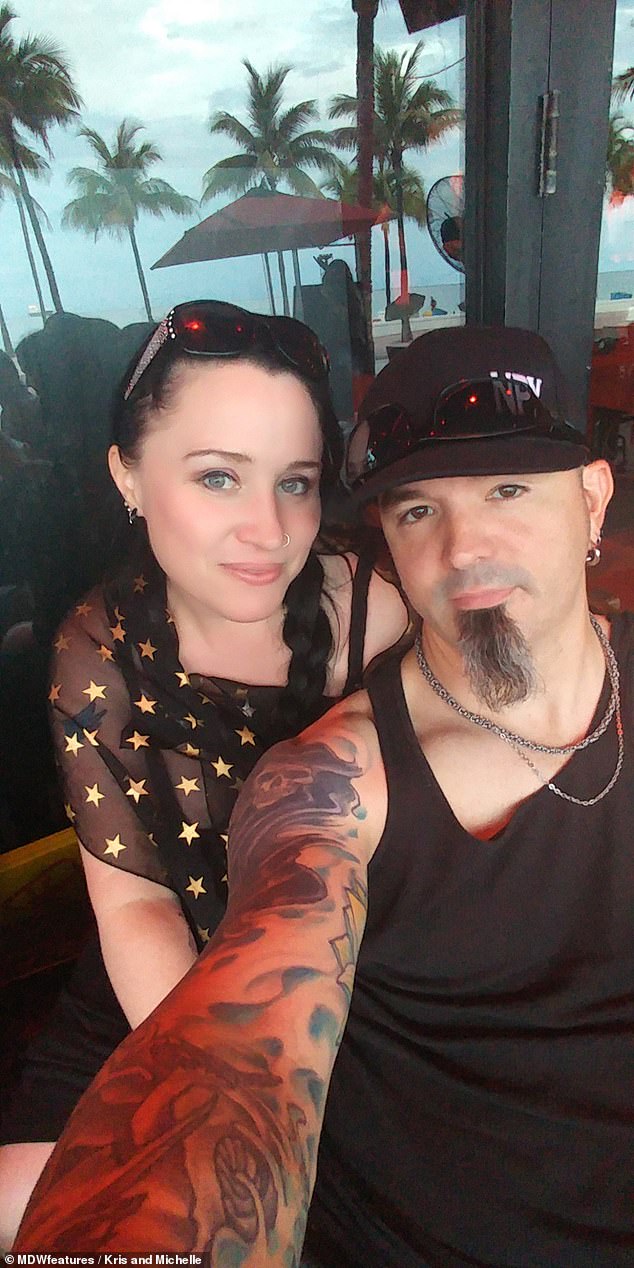 Michelle opened up to her and Kris’ daughter about their polyamorous relationship, and her relationship history, which encouraged the 13 year old to admit she was bisexual too

‘We want people to understand it’s about love, relationships, bonding and commitment. Polyamory is actually very widespread, but most people are so fearful of their families and community they hide it.

‘Love is love. As simple as that. Hate shouldn’t be a thing. Love shouldn’t be limited by race, identity, orientation or religion. Everyone deserves love and to be loved. Equally and fully.

‘We will no longer hide our feelings and relationships. We will stand proud for ourselves and the ones too afraid to come out.’