Put it down to chance or divine intervention, but on the day Prime Minister Scott Morrison introduced his religious freedom bill to Parliament the ABC announced it had commissioned a feature documentary on Israel Folau, the rugby player whose social media posts claiming that homosexuals would go to hell triggered a major battle over free speech and its potential for harm in 2019.

The 90-minute documentary, which is in pre-production and is slated to go to air late next year, will be made by In Films, the production company behind Revelation, Sarah Ferguson’s three-part series on sexual abuse within the clergy. ABC sources say it will take an even-handed approach to a man its press notes describe as “a homophobic bigot to some, a persecuted freedom warrior to others”, as it examines the controversy “in all its multi-layered complexity”. 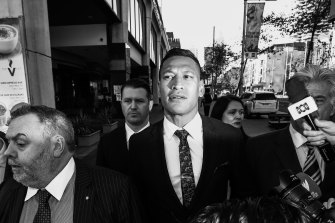 The row that erupted over Israel Folau’s comments about homosexuality on social media in 2019 will be the focus of a documentary feature for the ABC.Credit:Mark Metcalfe

But the broadcaster is bracing for what it anticipates will be a flashpoint on its schedule for 2022.

During its upfront presentation on Thursday afternoon – delivered, for the first time, to the public via video – the broadcaster revealed a strong slate of Australian drama that stands in stark contrast to the limited offerings announced by the commercial networks this year.

Leading the charge is Barons, an eight-part fictionalised account of the surf lifestyle brand wars of the 1970s, starring Sean Keenan (Puberty Blues, Nitram) and Ben O’Toole (Love Child) as mates who fall into, and out over, big business.

Savage River is a murder mystery set in regional Victoria starring 13 Reasons Why’s Katherine Langford as a former prisoner whose attempts to restart her life are held back by a small town’s suspicions.

Significant Others is billed as a psychological drama about a family attempting to come to terms with the disappearance of a mother. Troppo, set in far north Queensland, stars Nicole Chamoun and Thomas Jane as an odd couple pair of private investigators. The eight-part series is inspired by Candice Fox’s bestselling novel Crimson Lake.

This year has been massive for the ABC in the local drama space, with Wakefield, The Newsreader, Fires and Total Control. That uncommonly strong line-up owed much to COVID, which delayed production on some shows and led to what ABC’s director of entertainment and specialist programming Michael Carrington called “a stacked pile of amazing content”. But he has vowed to “continue that momentum into next year, and the line-up is going to be just as strong.”

Sally Riley, the broadcaster’s head of scripted production, is making an unprecedented commitment. “We want to have an Australian drama on every Sunday night through the ratings year, that’s 40 weeks,” she said. “That’s our ambition, that’s what we’ll continue to do, and at the moment we have the funds to do that.” 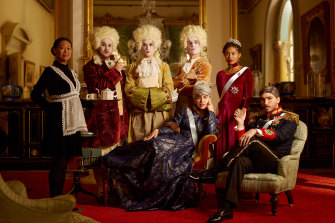 Stories From Oz is a six-part musical documentary series from The Chaser team. Credit:ABC

The ABC turns 90 in 2022, and while nothing has yet been announced the occasion will certainly be marked. “We’re trying to look to the future, what the next 90 years might be, but there’s no doubt we’ll have to celebrate the achievements since we began broadcasting,” said Carrington.

Unashamedly looking backwards will be The Chaser, which has a six-part historical documentary series with a twist. Stories From Oz will revisit some major moments in our past – Olympian Steven Bradbury ice-skating to gold, the Schapelle Corby case, the Tampa affair, the quarantine kerfuffle over Johnny Depp and Amber Heard’s smuggled pooches Pistol and Boo – all in the form of self-contained musicals.

“It is completely mad,” said Carrington. When he was first pitched the show, he recalled, “I took a deep breath, tried to visualise what it could be like, and just thought it was so fresh and so unique that we had to have it.”

Returning shows include a final season of Julia Zemiro’s Home Delivery, a new Back in Time dedicated to the corner store, a 14th season of Mad As Hell from Shaun Micallef – who promised “to keep on doing it until we get it right” – and a new season of Old People’s Home For, but this time with teenagers instead of four-year-olds.

Q&A will continue to be hosted by the rotating line-up of Virginia Trioli, David Speers and Stan Grant, while the Brett Whiteley art fraud scandal will go under the microscope in a two-part documentary based on former The Age journalist Gabriella Coslovich’s Walkley-winning book Whiteley on Trial.