Home » Lifestyle » ‘It was an actual discovery’: Navigating sex after a long-term relationship

‘It was an actual discovery’: Navigating sex after a long-term relationship

During the early years of Jan Evans' 10-year relationship, sex was fun and spontaneous. But as the marriage turned sour, frequency waned, and so did desire. "It occurred occasionally, but in hindsight I think I tried to avoid anything that involved intimacy," she recalls.

About five months after separating, Jan, now 48, moved interstate. She decided to get back into the dating game, so she created an online profile. 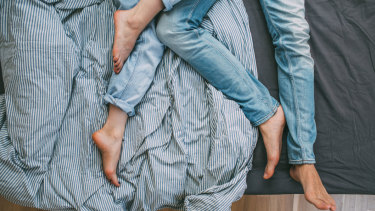 “I bought nice lingerie, worked on building my self-confidence … It wasvery empowering.”Credit:Stocksy

"I quickly discovered there seemed to be only one expectation, and that was sex," she says.

Jan's first online dating experience was with a 27-year-old man. "I was initially uncomfortable about the age difference, but soon decided to go on a journey of sexploration and to really open myself up to learning about my sexuality. I recall that first experience being fun, fumbling, freeing and, most importantly, safe."

While Jan found the online world confronting, she was also excited to get in touch with her sexuality. "I don't even think it was a rediscovery," she says. "It was an actual discovery.

"I bought nice lingerie, worked on building my self-confidence, was open to new experiences. It was very empowering."

Coming out of a long-term relationship and facing the prospect of intimacy with someone other than a long-term partner can be daunting.

"If sex has been associated with a deep emotional commitment, then that can be a confronting aspect," says relationship councillor Susan De Campo.

"Sex with a new person can sometimes be a double-edged sword. It may be that there was a period in the marriage where sexual chemistry was fantastic and long-term familiarity meant that each person had figured out exactly how to satisfy the other.

"There can often be doubt about whether such chemistry or connection will ever be found again. It might also be a case of a person's libido decreasing with age and so there's a worry that there will be an expectation with a new partner to engage in sex quickly."

This can leave some women feeling like a young virgin, rather than a sexually experienced woman, having to second guess, find a way to discuss the topic, or fake it until you make it.

"When couples have been together a long time, they have gradually accommodated all the changes associated with that – grey hair, a few wrinkles, a bit of extra weight, waxes and wanes of libido," says De Campo.

"If you have to start all over again, it is likely that insecurities about the toll of time and life will emerge. Having conversations about such realities is difficult with someone you know, let alone a potential new partner."

De Campo suggests online research if you're unsure about what to expect.

"Try not to overthink it. I have so many people in these situations who say to me, 'You know, it was just like riding a bike, you never forget.'"

And with a new-found freedom, you may just find yourself rediscovering a love of sex you thought you'd long lost.

"One of the joyous things about getting older and wiser is the increased ability to have a laugh at yourself and not care as much about what others think," says De Campo.

"I'm a fan of laughing about awkwardness. If, however, you are feeling uncomfortable about engaging in sexual intimacy, you need to find a way to talk about it with someone."

De Campo's biggest tip? Focus on discovering your own likes and dislikes, and setting boundaries that work for you.

"No one, of any age or gender, should feel pressured to have or not have sex. If you want to have it, and it's safe to do so, have it. If you don't, then say no without guilt or remorse."

"Life's too short to compromise!"

This article appears in Sunday Life magazine within the Sun-Herald and the Sunday Age on sale June 9.